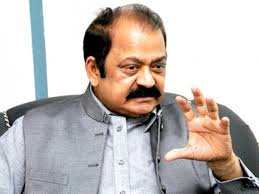 Now the cat is out of the bag! A very senior leader of the ruling PML (N) of Pakistan has openly admitted to the nexus between the “establishment” (Pakistan Army) and the militant organisations operating against India from the soil of Pakistan.

The Law Minister of Pakistan Punjab, Rana Sanaullah, on Thursday, May, 18, said in an interview to BBC Urdu that legal action against proscribed organisations like Jamaat-ud-Dawa (JuD) and Jaish-e-Mohammed (JeM) is not possible since the state is involved with them.

While responding to a question as to why Pakistan has failed to act against anti-India groups that  are close to the “establishment” (Pakistan Army) and operating from Punjab  he said, “As far as prosecuting these people is concerned, when the state has been involved in their activities, on that basis can you prosecute them?”

By the look of it, the truth came out at the spur of the moment. It seems as if the minister wanted to point a finger at the army and in the process, he has opened a can of worms for his own party which is ruling the country.

He immediately retracted by saying that his statement has been quoted out of context by the channel concerned and that his interview posted on the BBC website is incomplete. He now wants the BBC to upload the complete interview to clarify the statement attributed to him so that it could be seen in correct perspective.

Clearly, these are diversionary tactics to confuse the issue and slither out of a politically damaging situation.

An interesting turn to the incident comes from the fact that it was the same minister, Rana Sanaullah, who declared in January 2016, after the Pathankot terrorist attack, that Masood Azar, the head of JuD had been taken under “protective custody.” He has carried out quite a volte-face from that time to now – from arresting a person to saying that he simply cannot be acted against!!

Both JuD which is an off shoot and a front for the banned Lashkar-e-Taiba (LeT) and JeM have a strong presence in Punjab and Rana Sanaullah would be quite aware of their activities, if not personally aligned with them.

The militant organisations, as was expected, have given a sharp response to his statement. They have said that the courts of the country, right up to the Supreme Court of Pakistan, have not found any reason to ban them so there is no question of any involvement of the state. Nobody, of course, would buy this statement.

The statement gains more consequence given that it has come a day after India approached the Interpol to issue a Red Corner Notice against Masood Azar, the supreme leader of JeM and three of his associates who were involved in the Pathankot terrorist attack.

Pakistani political establishment, bureaucracy and media have literally ridiculed the evidence presented by India showing involvement of JeM in the Pathankot terror attack. India has allowed Pakistani investigating agencies access to the site of the terror incident. A reciprocal initiative from Pakistan of allowing an Indian team to visit the country and record statements of those involved in the execution of the attack is not forthcoming.  Clearly, Pakistan is reneging on the promise given by none less than the Prime Minister of the country.

It could be that Pakistan has used Rana Sanaullah as a tool, a conduit, to push home the point that there can be no further progress on the investigation of the leaders of JeM and JuD.

It may be recalled that Pakistan has been consistently refusing to act against Hafiz Saeed who was the master mind of the Mumbai terror attack and against whom India has presented a comprehensive dossier not only to the country but also to other prominent countries like the US.

The writing on the wall is that we are back to square on so far as joint action against terror by India and Pakistan is concerned.

The statement, nevertheless, has been taken seriously by other nations of the world. The European Union, in particular, has called upon its representatives in Pakistan to verify and confirm that the statement has been made by the minister. A confirmation to this effect will lead to serious action. As a first step landing rights for Pakistan Airlines in the European Union may be curbed followed by economic sanctions. It is quite likely that Pakistani migrants would be subject to more scrutiny during their travels and in case they apply for extension of visas or citizenship.

Europe has reacted in this sharp manner since it is still feeling the sting and the heat of the Paris and the Brussels terrorist attack. It is determined to bring in stringent rules and methodologies to contain and vanquish the cult of terrorism.

What is surprising is the deafening silence on the issue from the US which is a clear indicator that the country is still not ready to accept the intransigence of its one time ally in the so-called global war against terror. Such double standards are not going to bring about a terrorism free world that the so-called sole super power of the world keeps talking about all the time. Words have to be supported with action.

India may have to give up on its sincere effort to get Pakistan involved in the process of investigation of terror crimes emanating from the country, an initiative very close to the heart of Prime Minister Narendra Modi and one in which he has invested considerable political capital. The logical alternative would be to stop the process of dialogue and garner international support to pressurise Pakistan into putting a cap on its self destructive policy of giving support to terrorists and militant organisations.