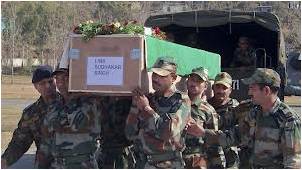 The nation is just about coming to grips with the brutal gang-rape in New Delhi and now its collective sensibility has been assaulted by the equally brutal killing of two of its brave soldiers, Lance Naik Hemraj and Lance Naik Sudhakar Singh, while they were patrolling the line of control at Mendhar, Jammu and Kashmir, well within their own territory and jurisdiction. While there exists no doubt about this sordid incident being the handiwork of the beasts who pass off as soldiers in the Pakistan Army, the government of Pakistan would like us to believe that somebody from Mars or something came down to commit this crime against humanity. The entire government from Foreign Minister Hina Rabbani Khar to Pakistan’s High Commissioner to India have brazenly denied the involvement of their soldiers in the whole dastardly affair.

At the outset it needs to be understood that brutality of this nature is not new to the Pakistan Army; the world is well aware of the manner in which Captain Saurabh Kalia and five brave Indian soldiers were taken captive by the Pakistan Army during the Kargil war in 1999 and subject to the most horrendous form of torture over twenty two days from May, 15 to June, 07, 1999. Their mutilated bodies were handed over to India with a single bullet in the temple indicating a cold bloodied murder. The family of Captain Saurabh Kalia, unable to come to terms with this crime against humanity, is fighting a lonely battle to get justice for their son even as the Pakistani leaders go about making crude, insensitive remarks on this issue. A similar incident, though unsubstantiated, is said to have taken place in the year 2001-02 at Naushera, Jammu and Kashmir. In this instance fourteen soldiers of the Indian Army were killed and mutilated in a guerrilla type raid by the Pakistan soldiers; since the incident happened when cease fire was not in place, the Indian Army is said to have flattened out the post from where the raid had come.

As the Nation grieves this mindless loss, there is a need to reflect on the situation, especially in light of the fact that such behaviour is routine for the Pakistanis. India has undoubtedly sent a strong protest but would that be sufficient?? Should we express our horror for a few days and get back to business as usual mode or should we get to grips with this clear indicator of the confrontational mindset that continues to prevail in the neighbouring Nation. Is our eagerness to play cricket and open the visa regime a bit off the mark?

Let us take a global view of the whole affair; India is an emerging global power and already a big regional power. How would a global power like the United States or even Chine react to an incident of this nature? One would not be quite off the mark by suggesting that, by now, at least the local area from where this brutality had emanated would have been destroyed with air and artillery fire. If the whole matter culminates with some meetings and a few well guarded words mostly spoken by our Ministry of External Affairs (MEA) then no message would have been sent to the Pakistani Army and such intransigence will keep happening.

Public outcry has emerged as a potent force in recent times. For India, the loss of its two brave soldiers in this manner is an issue as grave as the gang-rape that led to massive nationwide protests. The brutality and inhumanity in both incidents is of a comparable level. The public, therefore, needs to express its anger against Pakistan on the streets. People to people contact and initiatives like the ongoing South Asia Free Media Association (SAFMA) meetings and other “Aman Ki Asha” type of programme’s need to be given a serious relook in the light of these developments. India needs to reject the double standards that are prevalent in Pakistan’s attitude.

There is also a need to put a lid on all talk of lowering the security threshold in Jammu and Kashmir. It is not the sole responsibility of the Indian army and a few analysts to cry hoarse about the enhanced threat levels that are prevalent in the State; it is there for all to see. Unfortunately, some lobbies are hell bent in politicising the issue in a manner that would spell disaster. It should never be forgotten that those who are guarding our frontiers are good human beings and honourable soldiers, if they are denigrated while performing their duty they do feel bad. To say that their morale and efficiency is not adversely affected would be a fallacy.

The bottom line, therefore, is that the time for India to flex its muscles in tune with its global and regional status has arrived. Agreed both India and Pakistan need to exercise restraint but we also need to lay down a threshold which says -this far and no more. It is time for the MEA to give credence to the security imperatives of the nation while chalking out its intricate diplomatic moves. It is time for the Ministry of Defence to assert itself in such issues. After all, everything cannot be seen through the prism of diplomatic relations; in a case like this if relations take a toss, so be it. How this is to be done is for the government to decide, but firm action is definitely called for. The government needs the strong support of the people who should not take such brutality against their soldiers lying down, Pakistan should be given a clear message to relent or get ready to face the consequences. In Jammu and Kashmir any talk of a letdown in the security threshold should be should be given a firm shut up call.