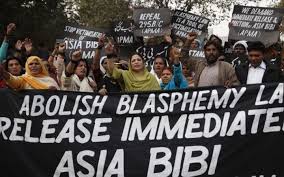 Pakistan’s Blasphemy Law is one among the most brutal and discriminatory legislations in the modern world. On the face of it the law prohibits Blasphemy against any recognised religion and provides for punishment ranging from fine to death. In actuality, it is being used to suppress and brutalise the minorities in the country – Hindus, Christians, Ahmadiyas, etc.  The law is in absolute contravention to international norms on human rights, especially when related to the rights to freedom of religion and belief; freedom of expression; and equal protection by the law. Jurists across the world hold the view that this law is often misused to settle personal vendettas and achieve political purposes.

A good example of the diabolic nature of the law is the case of Asia Bibi which is now in the news. Asia Bibi is a Christian woman from Pakistan who got into a tiff with other ladies while harvesting their fields in 2009. She was accused of making some offensive comments against Prophet Muhammad (PBUH) for which she was arrested and sentenced to death. She has been in Death Row ever since. Now, the Supreme Court of Pakistan has acquitted her on the basis of unreliable evidence.

It must be noted here that on January, 04, 2011, the then Governor of Pakistan Punjab, Salman Taseer, was assassinated by his bodyguard, Mumtaz Qadri, because he was a staunch opponent of the Blasphemy Law and supported the acquittal of Asia Bibi.  Later Mumtaz Qadri, while in jail, was looked upon as a hero and is revered as a martyr after his hanging in 2016. Such is the level of dogmatic Islamic fundamentalism that has overwhelmed Pakistan.

It is to the credit of the Supreme Court of Pakistan that it has reversed the death sentence served to Asia Bibi by the lower courts. The ends of Justice have been met even though it has taken eight long years to come by. It is however, the events after the verdict that cast a shadow on the entire proceedings.

Fundamentalists have resorted to harassment and open threats to Asia Bibi and her family, her lawyer has been forced to flee the country, the Christian community is trembling for fear of physical violence, property is being destroyed and vandalism is being  resorted to.

The rabid leadership of the fundamentalists has gone to the extent of instigating people to murder the Judges who have rendered the judgement and called for a rebellion against the Pakistan Army while denouncing its Chief, General Qamar Bajwa, as an anti-national. So finally, the Islamic fundamentalist monster has decided to devour its master – the Pakistan Army! The lack of a reaction by the army indicates its impotence in dealing with the fundamentalists, whose growing power definitely does not augur well for the country or the region.

The riots have also propelled Prime Minister Imran Khan to address the nation. In his address he spent more time in establishing his Islamic credentials than to warn the errant law breakers of punishment for their unlawful and violent activities. The propaganda machinery of Pakistan wasted no time in projecting the prime minister as an embodiment of courage for having upheld the law of the land.

The persona of courage, however, fell flat when he struck a deal with the law breaking fundamentalists, wherein, he promised that Asia Bibi and her family would not be allowed to leave the country and the Government would not block a review petition of the verdict put in by the protestors. This act of capitulation by the prime minister has irretrievably damaged whatever little trust that existed between the Pakistani state and the minorities of the country.

Pakistan, in any case, has a terrible record of persecution of minorities. At the time of partition, Pakistan had 11 to 12 percent Hindu/Sikh population, now it is barely 1.5 percent. Muslims of sects other than the predominant Sunnis are being blatantly persecuted. Sections 298-B and 298-C of the Pakistan Panel Code outlaws Ahmadis from calling their place of worship a Masjid. In September, 2013, the Sialkot police tore down the minarets of an Ahmadi place of worship simply because a fundamentalist cleric gave a call that the building resembled a mosque.

The persecution of Christians is, by far, the most brutal! The suicide bombing at all Saints Church in Peshawar in 2013 left 80 dead and about 100 injured. This was followed in 2015 with another suicide bomb attack on two churches in Lahore, Pakistan, with many casualties.  In August 2012, Rimsha Masih, an 11 year old Pakistani Christian girl was arrested under the Blasphemy Law on allegations of having desecrated the Holy Quran. The arrest was allowed despite scant evidence and with utter disregard to her being a minor suffering from Down Syndrome; the hapless family ultimately migrated to Canada to escape horrible persecution. In November, 2014, a pregnant Christian woman, Shama Bibi, was beaten to death and thrown into the furnace of a brick kiln, for allegedly desecrating the Holy Koran. Her husband was thrown in the furnace even while he was alive.

All such acts have also put paid to the spirit of nationalism that the Christian community in Pakistan harboured for their country. They have also elicited international disgust but the Pakistani leadership remains non-bothered; successive governments in Pakistan have done nothing to assuage the sense of insecurity of the community or the other minorities. Now Prime Minister Imran Khan has put a lid on whatever pretensions of liberal secularism that have been harboured from time to time.

One can only look back with nostalgia at the promise made by Muhammad Ali Jinnah to the people of the country. “You are free; you are free to go to your temples, you are free to go to your mosques or to any other place of worship in this State of Pakistan. You may belong to any religion or caste or creed — that has nothing to do with the business of the State,” he said. Apparently, his successors have other ideas about what the nation will look like in the future. Prime Minister Imran Khan, particularly, has demonstrated that he will not hesitate from committing Blasphemy with this office and the minorities of his country to achieve his vision of a pure Islamic state.