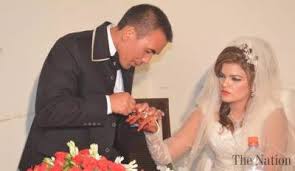 On May, 6 the Federal Investigation Agency (FIA) of Pakistan busted a racket of Chinese nationals involved in trafficking young Pakistani girls to China by contracting marriages. Eight Chinese nationals were arrested from Lahore airport and other areas on the charge of trafficking the young women whose families were paid Rs. 50,000/- each.

This is merely the tip of the iceberg, as much is remaining untold about this new trend. An in-depth article on the subject titled, “The Pakistani brides being trafficked to China,” written by Saher Baloch and carried by BBC Urdu, illustrates the modus operandi with the help of a case study. A Pakistani Christian girl going by the name of Sophia was married to a Chinese who posed to be a Christian. The marriage was conducted strictly in accordance with Pakistani customs.  Within a month, Sophia was back in her parents’ house; she escaped the custody of her husband on realising that she was a part of a girl trafficking racket. Sophia was lucky, but many others are not and hundreds of such case are being reported every year.

Most of the girls being trafficked are from minority communities, mainly Christians, but Muslim girls are also being targeted. Senge Sering, a US based activist from Gilgit-Baltistan, recently posted a tweet with a video of a Pakistani girl named Ismat from Lahore who had been bought by the Chinese and was waiting to be trafficked. The hapless girl makes a fervent plea in the video to be saved. Senge Sering made an appeal to Prime Minister Imran Khan to intervene.

The Chinese trafficking gangs pose as Engineers working for the China Pakistan Economic Corridor (CPEC). They lure families and arrange the sham weddings.  In recent weeks, more than two dozen Chinese nationals and local Pakistani middlemen, including at least one Catholic priest, have been arrested in connection with the sham marriages. The trafficked girls are put into prostitution, sexual slavery and even used for the abhorrent practice of organ harvesting, which is emerging as a big industry in China.

There are some cases of Chinese looking for legitimate brides too. This is because of the population imbalance in China as a result of the single child norm, which led to parents opting only for a male child. The deficiency in women was being covered from poor countries like Vietnam, Myanmar and Cambodia. Now Pakistan has also been included, at the top of the list, since it is the easiest country to operate in. The country has seen a surge of brides applying for Visa to go to China.

There are many factors that go into making Pakistan the preferred destination for this obnoxious, grossly immoral and illegal activity. The extreme poverty in Pakistan makes it easy for the traffickers to find girls at a very less premium as compared to other countries.

Secondly, the Chinese enjoy diplomatic immunity because of their preferred status in the country as the providers of much needed money; they now look at Pakistan as their fiefdom where they can do anything with no questions asked. It can be taken for granted that the Chinese caught in the trafficking racket will go scot free while the locals will be incarcerated; hence they have no fear. Post the FIA raid the Chinese embassy had the gumption to state, “According to investigations by the Ministry of Public Security of China, there is no forced prostitution or sale of human organs for those Pakistani women who stay in China after marriage with Chinese. We will never allow a few criminals to undermine the friendship between China and Pakistan….” The statement leaves no doubt about the raid being pushed under the carpet.

An important factor in this evil network is the legal marriageable for women in Pakistan which stands at 15 years, in accordance with Sharia Laws. At this age the girl is too young to even understand what is happening to her and as such the process becomes very easy to handle. Pakistan is now going for an amendment bill to raise the marriage age of girls to 18 years. The bill was approved by the Senate but it faced opposition in the National Assembly. Sadly, even same party members of the Assembly were seen giving opposing views, which is quite unprecedented.  Those with rigid mindsets in religious affairs termed the bill as one denouncing Allah; they questioned whether the lawmakers knew more than Allah.

China is also exploiting and harassing Uighur Muslim women married to Pakistani traders. These traders leave their families in Xinjiang when they come back to Pakistan to conduct business. In 2017, 40 such women vanished even as the hapless families went from pillar to post searching for them. They have recently been released but only after giving an assurance that their religious ideals will remain “adaptable to Chinese society.” The women are telling devastating stories of their time in custody, where they were made to eat pork and drink alcohol which is not allowed in their religion.

Pakistan is clearly paying a very heavy price for CPEC. The project is facilitating the infiltration of the Chinese into the very fabric of the Pakistani society and causing havoc to the people. While the rich are becoming richer beyond comprehension and remain unaffected by the Chinese duplicity, the life of the poor and marginalised is becoming unbearable. The minorities, already under stress of surviving in a vitiated environment, are now facing the biggest threat ever, where their children are being exploited beyond belief.

What is happening in Pakistan is no better than the slave trade of the olden times. It is time for the international community and human rights organisations to take notice of the terrible situation developing in the country due to the unholy China-Pakistan nexus. It has already deprived the poor people of their livelihood and is now directly attacking their family honour.

(Mehtab is a US based Engineer with interest in Geo-politics)