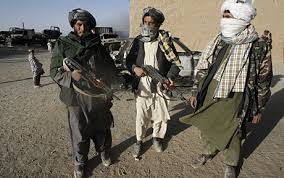 The policy of those in Pakistan who are responsible for the sham of a dialogue cannot be fathomed but the confusion in the international fraternity is quite obvious from the headlines given above. In Pakistan, however, there seems to be complete tranquillity so far as the situation is concerned. The government is following a “business as usual” approach which tends to suggest that the Taliban issue is a minor pinprick that can be effectively dealt with by the ministry of interior.

The approach of the government has left everybody flummoxed. Even as the Taliban has removed all stops in targeting innocent people and institutions of the country the interior minister, Nisar Ali Khan, finds it appropriate to go on record to say that majority constituents of the Taliban are not enemies of Pakistan. Can it get weirder than this? Here we have an organisation that has vowed to overthrow the state and its constitution through violent means with the specific purpose of introducing a mediaeval interpretation of Islamic law and the interior minister finds nothing alarming in the situation!! He sees no harm in reaching out to this set of rabid fundamentalists. In this absurd line of thought the interior minister seems to have the total support of the Prime Minister himself. They are both hand in glove in bending backwards to appease the fundamentalists despite a majority of their own party leadership, the opposition, the intelligentsia and the media being against such a policy.

The confusion and internal contradiction of the government of Pakistan in dealing with the Taliban leaves one wondering as to why the Pakistan army is not willing to step in? Surely the soldiers of the country would not like to sit back and see their comrades being butchered in attacks like the inhumane killing of army personnel of 23 Frontier Corps recently. Surely the blood of each and every soldier of the Pakistan army would be boiling. The reason for the hesitance to militarily engage the Taliban can be attributed to a lack of confidence in the Army so far as its capability to emerge victorious in such a conflict is concerned. The well known fundamentalist bent of mind of a major portion of the Pakistan army has a role to play in this hesitation. The military leadership is wary of the sizeable portion in the Army’s rank and file that is uncomfortable in launching operations against the Taliban. This line of thought is further cemented by the proclivity that the force is showing in engaging the Taliban in indirect conflict by use of air force and artillery instead of a face to face infantry engagement.

The government needs to ensure the implementation of its newly evolved National Internal Security Policy (NISP) in letter and spirit. The policy contains a clear definition of the strategic level intervention that is required to end the internal disputes. A major component of the policy is to strike the roots of fundamentalism by putting a check on the 22,052 Madrasas (religious seminaries) that are identified as the prime sources of spread of extremism in the country. Many of these seminaries are associated with fundamentalist organisations like the Lashkar-e-Toiba; they are financed by unidentified sources and are responsible for the spread of propagandist hate material.

Sadly, the government has adopted an unconcerned attitude towards the issue of extremism. This is clearly visible from the behaviour of Prime Minister Nawaz Sharif. Instead of looking into the problems at home the Prime Minister is out to break the record of his predecessor, Yusuf Raja Gilani, of 40 foreign trips in a single tenure. He is not doing too badly having already visited China, US, Turkey Saudi Arabia (many times) and a considerable number of smaller countries in the last three months. His jaunts have already cost the almost insolvent exchequer of Pakistan a whopping Rs 168 million. It seems as if, in Pakistan, mundane things like dealing with the Taliban, growing sectarian violence across the country, bullet ridden bodies in Balochistan, power crisis are left for subordinates to handle while the boss gallivants around the world.

The Taliban is taking maximum advantage of the prevailing environment of uncertainty. The morale of its cadre is very high. They refuse to get cowed down by threats of the use of force; they can smell victory from a rudderless, fatuous and cowardly government and an unsure military. This attitude is very obvious from the manner in which the organisation has shown no compunction in declaring a ceasefire and almost simultaneously continuing with its terror activities. It is playing around with the government like a cat plays with a mouse!

It is time for the government of Pakistan to realise the gravity of the situation and come up with a credible response that suits a strong nation. It simply cannot take the killing of innocent people by the Taliban lying down. It has to put an end to the teaching of fundamentalism that is rampant across the country. Further procrastination on this issue that has already attained critical mass would spell doom for the nation.