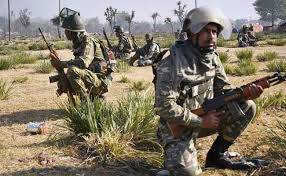 The terror attack on an army convoy in Pampore that has led to the killing of three brave Indian Army soldiers gives a clear indication that change in the military hierarchy of Pakistan will not usher any paradigm shift in the country’s policy with respect to India.

Export of terror to the state of Jammu and Kashmir and onwards to the rest of India continues to be the fulcrum of the Pakistan policy towards India.

In the first major reshuffle in Pakistan Army after Gen. Bajwa’s taking over as Army Chief, Lt. Gen. Naveed Mukhtar has been appointed Director General of the infamous Inter Services Intelligence (ISI).  Lt. Gen. Mukhtar has earlier served as head of the counter terrorism wing of the ISI. He is a strong advocate of aggressive measures to undermine India, especially so in Afghanistan. It is apparent that such a policy can be applied only by supporting the Taliban and other militant organisations directed against India.

The appointment of Lt. Gen. Naveed Mukhtar, therefore, is yet another an indicator of continuation of the policy of nurturing militant organisations as force multipliers and strategic assets in the furtherance of Pakistan’s policy towards India.

Indians have this proclivity to live with a romantic illusion that someday, sometime, a miracle will happen and relations with Pakistan will become normal and strong! In pursuance of this illusion, the smallest of instances and incidents are taken as indicators of the tide turning for the better.

When Nawaz Sharif took over as Prime Minister of Pakistan, he made some positive statements that propelled Indian media and intellectuals into a frenzy of positivity with predictions of the violent past giving way to a peaceful future based on enhanced business activity.  Nothing of this sort happened!

Prime Minister Narendra Modi called Prime Minister Sharif and other SAARC leaders for his swearing-in which the latter attended after due drama of taking a bold decision in spite of internal pressures. Once again, India experienced widespread euphoria, accentuated by the close personal chemistry between the two leaders, of a possible turn around in relations.

Hope and positivity attained a crescendo when Prime Minister Modi undertook an unscheduled visit to Lahore to meet and greet Prime Minister Sharif on the occasion of his birthday on December, 25, 2015.

A Pakistan sponsored terror attack on an Indian air base in Pathankot, within a few days of the visit, put paid to all the pipe dreams.

Forever the optimists so far as Pakistan is concerned, the Indian media including the television anchors, commentators and columnists was, of late, projecting the  exit of Gen. Raheel Sharif as yet another indicator of better days to come. This set of opinion makers was forcefully suggesting that it was Gen. Sharif and not Prime Minister of Pakistan who was standing in the way of an everlasting friendship between the two nations. The contention being put across was that Gen. Sharif had raised the threshold of violence to further his personal ambitions.

The superannuation of Gen. Sharif and a dark horse in the form of Gen. Qamar Bajwa taking his place was projected as a big victory of good over evil and the harbinger of a possible thaw in cold vibes being exchanged by the two nations for quite some time.

To give some more weight to the argument, Gen. Bajwa was projected as a professional soldier who likes to maintain a low profile and would be more interested in restoring internal order than getting into conflict with India. The character portrayal was done with such confidence and vividness that the columnists and commentators came across as old friends of the Army Chief designate.

The twin terror attacks in Jammu, at Nagrota and Chamliyal, destroyed this dream rather too soon for comfort of the “experts.”While the baton was changing hands in Pakistan the Indian security forces were embroiled in nasty fidayeen attacks in two locations.

The attacks could not have been held without explicit clearance from the incoming Army Chief. Thus, Gen. Qamar Bajwa registered his arrival with the proverbial bang.

Logic dictates that Gen. Bajwa cannot go against the well entrenched deep state and establishment that has nurtured him to get to where he stands today. He would not have become a general, let alone Army Chief, if he had held views contrary to the ideology and policy being followed by the Pakistani deep state. Even now, an attempt to get out of line will lead to his ouster and possible annihilation and he knows this very well. Therefore, the Jammu attack should have been expected more that the peace pipe that was doing the rounds.

If there were any doubts about the motives of Gen. Bajwa, they have been put to rest by the recent terror attack in Pampore. In short, it is business as usual with Pakistan and our eternal Doves will have to wait for another day to see their pipe dream becoming a reality.

It is crystal clear that the Army as well and the political class in Pakistan are hand in glove in the policy for proliferation of terror in India. It is, therefore, necessary to stay alert for perfidious action by Pakistan despite political and military changeovers that take place in the country.

The existing policy of no talks till the proliferation of terror and violence against India does not cease should be resolutely maintained. Punishment to Pakistan for its military misadventures should be swift and overwhelming. Political, diplomatic and military pressure should be maintained in equal measure to disintegrate the deep state.

India cannot and should not shy away from the challenge that is being posed by Pakistan to her sovereignty and integrity. When soft power is ineffective the objective should be to crush the enemy in a manner that he cannot raise his head ever again. In pursuance of such a policy the entire Indian nation needs to strengthen the hands of the government.