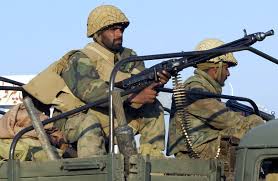 There seems to be no end to the volatility along the line of control and international border between India and Pakistan in Jammu and Kashmir. Voices of reason have been firmly side-lined in a concerted attempt to ensure that the region remains one of the most militarised in the world. Even after the Prime Ministers of the two Nations had agreed to work towards de-escalation of tensions by organising a face to face meeting between the Directors General of Military Operations (DGMOs) no forward movement has taken place. In fact the meeting has not come by due to some petty issues being raised by Pakistan. The general impression is that Pakistan is shying away from a face to face interaction. If Pakistan has nothing to hide then why is it reluctant to sit across the table and discuss things?

Sane voices on both sides are questioning the very basis of this enmity. After all, more than six decades have passed since the division of the region into two nations; surely this is time enough to gain a fair degree of confidence in charting individual courses and respecting each other’s sovereignty. What is coming in the way of a positive, mutually beneficial partnership? Why this constant reel back to our unfortunate history that is over and done with? Why not look ahead towards a better tomorrow?

India being a larger country does cause a certain degree of insecurity to its smaller neighbours, including Pakistan. What needs to be seen is whether this insecurity is justified; has India ever taken any step towards establishing hegemony as is commonly insinuated? There have been many instances in all neighbouring nations, most of all Pakistan, when a weak moment could have been exploited by India both politically and militarily but has such a thing ever happened? Instead, India has always extended a hand in support; she has never caused harm, especially to the sovereignty of her neighbours. What more needs to be done to instil confidence?

Pakistan, being a nuclear power has all the more reason to feel safe since the nuclear status makes chances of a conventional war between the two nations almost negligible, then why this feeling of anxiety? There are many in Pakistan who are convinced that the real threat to their country emanates, not from India, but from the extremist hordes that have sprouted mainly due to a blinkered anti-India sentiment. Can it be denied that organisations like the Lashkar-e-Taiba, Jaish-e-Mohammad, Lashkar-e-Jhangvi etc. have been created and find sustenance due to anti-India postures and that these organisations are causing more security problems within Pakistan than in India? They are the ones who provide motivation and wherewithal to Pakistan Taliban and other such extremist organisations that are an internal security nightmare for the Government and the people of Pakistan today.

Pakistan has always looked at Afghanistan as a region that provides “strategic depth” against India, Today, this very region is the focal point for all the security problems that the country is facing. It would benefit Pakistan to acknowledge that its strategic doctrine went wrong at some point in time and a correction now would be in order. Surely the leadership in Pakistan can well understand the price that is being paid to maintain a misplaced hatred and animosity against India.

There is no denying that every country would do its level best to ensure that its frontiers are secure from foreign invasions and that it is not subject to any type of coercion because of its weakness. India and Pakistan cannot be faulted for doing so, what however is reasonable to expect is a pragmatic assessment of the security threat and having in place adequate strength to meet the same; maybe not less but definitely not more than what is required. When seen through the prism of practicality this would not amount to asking for too much.

The matter of Kashmir that is often touted as the biggest bone of contention between the two countries is actually a non-issue now. It is being exploited by some powerful lobbies for personal benefit. A good idea would be to put it on the back burner for a few years and let things settle down before initiating a dialogue based more on the ground reality and pragmatism than emotional, media driven hyperbole.

Both countries have their own problems to contend with which are much bigger than their perceived animosity; it is towards these that the respective governments should divert their attention. For too long we have been the laughing stock of the world with our petty issues, it is time to grow up and act in a mature manner. If we can do this the course of history will change. Things will become easier if we constantly remind ourselves that while we play cops and robbers the Human Development Indices of both countries remains among the lowest in the world with India at 136 and Pakistan at 146 out of 186 countries; in Pakistan 40% children are malnourished, surely this should gain precedence over war mongering.

Even now nothing is lost, if India and Pakistan can get out of the time wrap that plagues them, if they can learn to coexist in a friendly atmosphere, then huge benefits would accrue to the two countries. On many occasions leaders on both sides have acknowledged that war is no longer an option, the time has now come to believe in what is being said. The idea that is being floated may not be palatable to those who have made a career out of keeping these Nations apart, its implementation will surely pose a huge challenge, but if the will is there the means can be found and the problem can be resolved, it is not as insurmountable. Ushering tranquillity on the border would be a good first step in this direction.