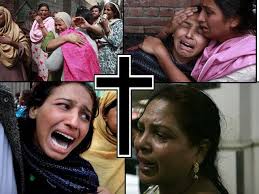 The suicide bomb attack on two churches in Lahore, Pakistan, has created a feeling of disgust in the collective psyche of the international community. Leaders from across the world have expressed horror over the barbaric act and have condemned it in the strongest possible manner. A spokesman of the Pakistan Taliban, Ahsanullah Ahsan, has claimed responsibility with a promise of “more such attacks.” Pakistan’s Interior Minister Chaudhary Nisar Ali has termed the act a reflection of the “frustration of the Taliban in the face of the stepped-up military operations against them.”

A good question here would be – why is the Taliban giving vent to its “frustration” by killing innocent minorities of Pakistan who have no role to play in the ongoing anti military operations against the militant group  in Pakistan? If the Taliban are actually the men that they profess to be then they should have targeted any one of the many military installations in Lahore!

The Pakistan Taliban spokesperson, further stated, “We promise that until an Islamic system is put into place in Pakistan such attacks will continue. If Pakistan’s rulers think they can stop us, they should try to do so.”

What becomes evident from this statement is the diabolic agenda of converting the nation into an Islamic state by killing all minorities. More disturbing is the realisation that various instruments of state are leaving the atrocity unchecked and unpunished and thus becoming a party to it.

Within the ambit of this immoral and wicked onslaught against the minorities, the Christian community is being specifically targeted by the Taliban for the last many years. There is evidence to prove that the Government of Pakistan has a role to play in this unholy plan.

The bombers were stopped at the doors of the churches not by personnel of the Lahore police, but by civilian sentries posted by the community itself. This precaution brought down the death toll drastically. Had the bombers blown themselves up within the premises of the churches as was their intention, the death toll would have been unimaginable. The government would have been aware that there is a huge gathering in the churches every Sunday, why then, did it not provide adequate security?

In August 2012, Rimsha Masih, a 11 year old Pakistani Christian girl was arrested under the infamous Blasphemy Law on allegations of having desecrated the Holy Quran. The arrest was allowed despite scant evidence and with utter disregard to her being a minor, suffering from Downs Syndrome. The hapless family ultimately migrated to Canada to escape horrible persecution.

In November, 2014, a pregnant Christian woman, Shama Bibi, was beaten to death for allegedly desecrating the Holy Koran and then thrown into the furnace of a brick kiln; her husband was thrown in even while he was alive.

The government has consistently been a mute witness to such atrocities. It simply raises its hands and expresses inability to deal with the situation. As a result, the militants are gaining confidence and security threshold is hitting rock bottom.

At the time of partition, Pakistan had 11 to 12 percent Hindu/Sikh population. When considered in terms of the existing population levels of the country, the present strength of the Hindu/Sikh community should be around one crore fifty lakhs. On ground, however, it is a miniscule thirty lakhs which is barely 1.5 percent of the population. One crore thirty lakh people have vanished into thin air. According to the Pakistan Hindu Council, about 20 cases of kidnapping of Hindu girls above 15 years of age are reported every month in Karachi alone. If the families of such girls approach the courts, hundreds of people gather outside and shout “Allah-o-Akbar”; even the judges get intimidated.

Faced with such terrible conditions, the minority communities of Pakistan are making a beeline for India. The most horrifying characteristic of this exodus is that Pakistan is covertly facilitating the same. There are reports to suggest that certain outposts in the Pakistani side of the India-Pakistan border, especially so in the Rajasthan sector, have been kept vacant deliberately to facilitate the movement of Pakistani Hindus, Sikhs and Christians into India.

Muslims of sects other than the predominant Sunnis are being blatantly persecuted. Sections 298-B and 298-C of the Pakistan Panel Code outlaws Ahmadis from calling their place of worship a masjid, claiming to be Muslims or preaching their faith to others. In September, 2013, the Sialkot police tore down the minarets of an Ahmadi place of worship simply because a fundamentalist cleric gave a call that the building resembled a mosque. During Eid al-Adha on October, 16, 2013, Ahmadis in Lahore were stopped from offering Qurbani (sacrifice). As a community, Ahmadis are blatantly being denied their religious identity in Pakistan.

At the time of partition, the vision of the creator of Pakistan, Muhammad Ali Jinnah, was of a nation that would adopt secularism to accommodate its historically multi-religious and culturally diverse population. The Hindu and Sikh families that chose to stay back were assured of security and basic rights equal to those of the majority community. Sadly, what has happened is at total variance to that vision.

The assertions of the Pakistan Government of being resolute in fighting against terror fall apart when the likes of Zaki-ur-Rehman and Hafiz Saeed are allowed to freely direct terrorist activity against India and propagate virulent anti-Islam propaganda. Such propaganda may be directed against India but it is harming the religious fabric of the country itself. Today, the very existence of all non Sunni Muslim communities is under threat in Pakistan. It would be best for the Government of Pakistan to realise that in matters as serious as terrorism and religious fundamentalism running with the Hares and hunting with the hounds is simply not feasible.