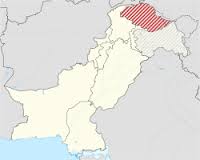 Finally the cat is out of the bag!! Pakistan has made it known that it will proceed towards amending its Constitution to amalgamate Gilgit-Baltistan as its fifth province.

The honour of making this momentous statement fell on Pakistan’s Minister for Inter-Provincial Coordination, Riaz Hussain Pirzada. He said that the process will be put in motion on the basis of a recommendation to effect given by a committee headed by Advisor of Foreign Affairs, Sartaj Aziz.

Pirzada chose Pakistan’s Geo TV to speak on the subject. Once the statement was made, the matter was laid at rest with no mention whatsoever in Pakistan media.  The objective, evidently, was to test out the waters before proceeding with the final push towards what is being planned out since the last many decades.

Simultaneously, Prime Minister Nawaz Sharif undertook a tour to the port city of Gawadar in Balochistan where he spoke eloquently about his, “dream to see Gawadar transform into a developed port city.” “Today, I see every path to [Pakistan’s] economic stability lead out of Balochistan,” added Prime Minister Sharif with a flourish.

As is his wont, Prime Minister Sharif was so taken in by his own emotions that he announced a 300 bed hospital and a university for Gawadar – with Chinese assistance of course; where else would he get the money from?

On another front, Pakistan-India Business Council (PIBC) Chairman, Noor Muhammad Kasuri, on March, 13, urged both countries to leverage the China Pakistan Economic Corridor (CPEC) to end the hostile environment between the two countries and ensure development and prosperity in the region. “CPEC is an opportunity of progress and prosperity for the whole region and it is up to the political leadership of various countries in the region how much benefit they want to avail from it,” he said.

It becomes very clear from the foregoing that Pakistan has scripted a sophisticated game plan to play out its imperative of assuaging Chinese apprehensions about the legality and security of the CPEC.

The move to amalgamate Gilgit-Baltistan is the most important prong in this strategy. Once the region is amalgamated, Pakistan would be able to send in more forces, especially the army, to safeguard the CPEC corridor and also provide a guarantee to China of its legal right over all areas from where the corridor will run.

The people of Gilgit-Baltistan, sadly, are too repressed to raise a voice against this blatant bid by Pakistan to devour their land. Even if they come out in protest their voices are not heard due to a clamp down on media by the Pakistani establishment. The iron curtain over there is worse than what was seen in Russia earlier and what is there is China and North Korea presently. Whatever little is heard about the happenings in the region is through the medium of social media. It is uploaded at great personal risk by the people residing there.

The activists of the region living in foreign shores, however, have been vociferous, in condemning Pakistan’s evil design to amalgamate the region illegally and against the wishes of the people. They have carried out a series of protests in front of the United Nations’ headquarters in Geneva ever since the malevolent plan has come to light.

United Kashmir People Nation’s Party chairman, Shaukat Ali Kashmiri, while speaking to the Indian News Agency, ANI, in Geneva, openly described the move as a big sham which would not give to the people their due rights. He clarified that Pakistan has been consistently attempting to project Gilgit-Baltistan as an entity separate from the state of Jammu and Kashmir but this contention has, equally consistently, been rejected by the international community.

He further emphasized that the move has reinforced a perception that Pakistan has always wanted to separate Gilgit-Baltistan from Jammu and Kashmir and gain full control over it at all costs.

Sadly, successive government in India since independence has chosen to remain silent spectators with regard to the oppression and atrocity that is being heaped on the people of Gilgit-Baltistan by Pakistan.

It is difficult to comprehend as to why India is dragging its feet despite its legitimate claim over the region as an integral part of the country. When the federal government of Pakistan approved the Gilgit-Baltistan Empowerment and Self Governance Order, 2009, the UPA government in India lodged its protest two whole weeks after announcement of the totally illegal package.

Simply put, India has failed to take credible steps in the international forums to establish its historic right over the region and demand its return.

The Indian media is also not showing any interest in Gilgit-Baltistan. Even now, when the Government of Pakistan has played its hand and made public its intention of annexing the region illegally, only a few television channels in India have covered the development and that too in a routine manner. In the print media there is only a small piece by the Press Trust of India (PTI) that has been carried by a few websites. Uttar Pradesh and the other states that have gone through elections are going nowhere but our area of Gilgit-Baltistan is fighting a battle for its very existence. So what should gain precedence?

An ostrich like approach by India will have disastrous implications. Further procrastination would signify India’s acceptance of Gilgit-Baltistan as Pakistani territory? The issue deserves serious thinking on the part of the Indian government. A course correction coupled with a proactive policy of nurturing the growing pro-India constituency in Gilgit-Baltistan is the need of the hour.

Prime Minister Narendra Modi has the stature and the will to change the narrative, all hope is now vested upon him and his government. It is time for him to use his goodwill to the benefit of the deprived people of Gilgit-Baltistan. All eyes are now honed on to the position that the NDA government will take with respect to Gilgit-Baltistan.

(Jaibans Singh is a reputed analyst, author and editor: www.defenceinfo.com)