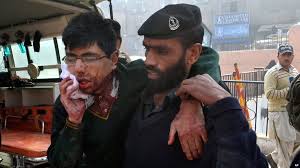 The global community is stupefied by the barbaric killing of school children in Peshawar, Pakistan, by terrorists on December, 16, 2014. 132 innocent children among 148 people have been killed in cold blood without reason; the number is rising as some more are succumbing to their wounds. It is a human tragedy of monumental proportions. All seven attackers were killed but that does not, by any means, reduce the pain that they have caused with their inhumane act.

The Tehreek-e-Taliban Pakistan (TTP) has taken responsibility for the act; The TTP spokesperson, Muhammad Khorasani, has termed the act as retaliation for the ongoing Operation Zarb-e-Azb by the Pakistan army against the TTP in North Waziristan. The TTP has asserted that their family members have also been targeted by the army and by this attack they have sought revenge.  “We selected the army’s school for the attack because the government is targeting our families and females, we want them to feel the pain,” said Mohammad Khorasani. The message given by the TTP to the Pakistan army is very clear, “what you can do, we can do better.” Unfortunately, it is innocents who are bearing the brunt of this evil tit for tat.

This is not the first time that the TTP has attacked civilian, unarmed and innocent people. Only last year, in Peshawar itself, the organisation attacked a Church congregation and killed dozens of people including children. The bomb blast at the Wagah border post was yet another act of terror by the TTP in retaliation against the army operations in North Waziristan.

The attack on school going children, however, is the ultimate depravity that any human being can indulge in. The increasingly inhumane policies of militant organisations like the TTP in Pakistan are a sign of their desperation; they are ready to go to any lengths to maintain their legitimacy with their cadre and their financers. Since they do not have the capacity to target high value military targets they are going for soft targets that give maximum publicity; the basic criminality and ungodliness that marks such a policy does not deter them at all.

As the world looks on with revulsion at the manner in which violence is enveloping Pakistan the political parties of the country have, for once, set aside their personal agendas and come on a common platform to condemn the dastardly attack and express a resolve to eradicate the Taliban. Prime Minister Nawaz Sharif held a meeting with heads of all parliamentary parties at the Governors House in Peshawar on Wednesday, 17, December. “We have decided to draft a national plan of action against terrorists and act upon it immediately,” said PM Sharif while reading out decisions taken in the meeting. The Prime Minister clarified that there will be no going back on Operation Zarb-e-Azb even as pressure on militants across the country will be applied. It was also decided to lift the moratorium on death penalty in militant related cases. Later reports in Pakistani newspaper, The Express Tribune, suggested that seventeen convicted Taliban militants, whose appeals and mercy petitions have been dismissed, will be executed in the next few days. It is being said that the army is also on board so far as the resolve to eradicate the Taliban is concerned.

However, the fact that this resolve is directed only against the Taliban is drawing the attention of security experts the world over; even in this hour of extreme crisis that Pakistani establishment is not ready to say a word against the likes of Hafiz Saeed and his terror outfit, the Lashkar-e-Toiba (LeT), or the other groups that are thriving in Pakistan with a specific agenda to destablise Kashmir and India.

This is where the question of morality and righteousness comes up. When a nation looks at an act of criminality through different prisms it loses the moral ground to fight against the same. In Pakistan the names of terror organisations may be different but their work is the same; they are also affiliated to each other. Terrorist’s shift from one organisation to the other with seamless ease and exchange in manpower is done quite often. The LeT is senior to the TTP and has assisted in its creation.  Under such circumstances a resolve to eradicate the TTP while leaving the LeT untouched would be self-defeating at the very outset. Pakistan has to realise that the policy of nurturing terror as an instrument of state policy in the fight against India was flawed in its very inception and needs to be set aside in totality. Terrorists are terrorists; they are criminals who have to be hunted down like dogs without any sort of discrimination. Till such time that a realisation on these lines does not dawn upon the military and political leadership in Pakistan no headway in the fight against terror can be made.

Today the Pakistani leadership is standing at a cross road, the killing in Peshawar has elicited a global outrage; the people of Pakistan are also aligned against the militants who stand isolated. Any act to target this menace will bring forth widespread support from within the country and from nations across the globe; procrastination, on the other hand, will isolate the leadership and embolden the militants. A soft approach will lead to many more Peshawar type attacks in the near future.

The civil society in Pakistan also needs to carry out some introspection. What is the nature of the society that has produced such animalistic tendencies among its people? What are the circumstances that have led to a complete breakdown of basic morality and righteousness in Pakistan? How can a person ever think that he is moving on the path of religion by committing such atrocities? In case the people take steps to bring back principles of righteousness and morality in their society a mortal blow will be struck on the very roots of terrorism.

In a democracy, however tenuous, the leadership cannot go totally against the aspirations of the people. In case the people of Pakistan let it be known to their government that they will accept nothing less than total eradication of terror from their society then the government will be forced to deliver.  The people should take initiative to provide information about the nefarious activities of the terrorists to the security forces, they should expose the over ground workers who provide administrative and logistic support system of the terror outfits. Terrorism in the Kashmir valley went down drastically only when the people came out fearlessly in support of the security forces, something similar is required in Pakistan also.

The Indian nation is standing firmly with the people of Pakistan in their time of need. Prime Minister Narendra Modi has spoken to Prime Minister Nawaz Sharif, a two minute silence has been observed in schools across the country in memory of those who have so needlessly lost their lives.  The feeling of empathy is very real and potent. Sadly, a cursory glance at the Pakistan newspapers reveals no mention of the empathy that the Indian people have extended to the people of Pakistan in this hour of grief. On the other hand a newspaper in Pakistan has carried a story – “Indian Kashmir mourning heart wrenching Peshawar attack,” with a photograph of Hurriyat chairman, Mirwaiz Umar Farooq, and some other Hurriyat leaders offering prayers.   Such politics under the existing circumstances leave a bad taste in the mouth.

This is the time for Pakistan to join hands with India and fight the menace of terrorism. There are other means available to resolve the issues between the two countries. A good reason for Pakistan to bring about a change in its policy of a thousand cuts based on low intensity conflict is that the policy has been counterproductive for Pakistan while India has been successful in offsetting the challenge.

Words cannot reduce the grief of the families that have lost their children and dear ones. However, concrete action in the direction of ensuring that such a tragedy never occurs again will, to an extent, ensure that the sacrifice does not go in vain.  It is now up to the government of Pakistan to take the lead in setting things right.