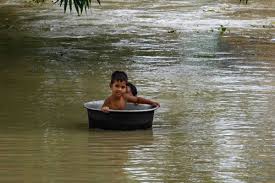 The beautiful Neelam Valley in Pakistan Occupied Kashmir (POK) stands devastated due to a cloudburst that led to flash floods. The calamity took place on 15, July; most badly hit was the Laswa area, where many houses and a few Mosques have been swept away. More than 23 people are reported killed while many are still missing.

The usual media blackout that is the norm for Pakistan under such circumstances is at play; not much information about the situation on ground is available. The preliminary report has been released by the State Disaster Management Authority. “The Laswa area of the valley was badly hit where many house were swept away. There were also reports of landslide in some areas. A total of 23 people have been killed,” Syed Al-Rehman Qureshi, Director of Operations, State Disaster Management Authority, said. He added that several people, including women and children, are still missing.

The Pakistan Army, always in the forefront to take credit, has issued a press brief to say that 52 individuals have been evacuated to camps and safer places. A statement to effect has been issued by the Army’s media wing Inter-Services Public Relations.

A week earlier on 8, July, floods hit several villages in Golen Gol area of Chitral district after the Jam Ashpar glacier, a favourite destination of the tourists to Chitral, exploded overnight and burst its banks. The entire area got inundated, leaving the locals and tourists stranded. There was no electricity for several days and no roads to talk of. Among those stranded was Aleema Khan, the sister of Prime Minister Imran Khan along with many foreign tourists who had gone there to witness the famous Shandur Polo Festival.

While heavy, torrential rains is a normal phenomenon in these areas,inundation and flooding is something that has recently started happening. According to experts the reason behind this is attempts by Pakistan to change the course of rivers emanating from the areas and construction of dams.

Junaid Qureshi, Director of the European Foundation for South Asian Studies (EFSAS), who operates a twitter handle @JQ_plaintalk tweeted, “Pakistan diverting the flow of the Neelam River into Punjab has today caused floods in the Neelam valley; 23 dead,150 houses and two Mosques destroyed. But why would we care for that part of Jammu and Kashmir? Our J&K “Azaadi” and so-called struggle is limited to Srinagar.”

The Neelam River is not the only example of dangerous exploitation of the water resources of the region by the federal government of Pakistan. Stuck with a power situation that is getting worse by the day Pakistan is determined to revive the mammoth Daimer-Bhasha Dam project. There is ample reason for this eagerness to get the project moving since the dam on the River Indus, to be situated near a place called “Bhasha” in Gilgit-Baltistan’s Diamer district, promises 4,500 MW of electricity and 8.5 million acres feet (MAF) of water that can be channelised for irrigation.

What is being sidelined is the fact that it will also displace 35000 people and cause the inundation of scores of villages and lush farmlands. It will destroy a heritage that has existed for millenniums. The benefit of the project is likely to miss the locals (as is the norm in Pakistan), and accrue to the Punjab region.

The project has a long and chequered history; in January 2006, the Government of Pakistan announced its decision to construct 5 multi-purpose storage dams in the country during the next 10-12 years. According to the plan, Diamer-Bhasha Dam project was proposed in the first phase with an astounding price tag of over US $ 8.5 billion. The World Bank, however, linked construction of the Dam to a No Objection Certificate (NOC) from India since the area is under dispute between the two countries. Pakistan knew that no such certificate would be forthcoming. There was also the problem of public protest against the project. The project has remained in a limbo ever since.

As was expected China made an offer to construct the dam as it is constructing many others in Pakistan along with the China Pakistan Economic Corridor (CPEC). Surprisingly, Pakistan has rejected the offer in what is being seen as a strategy to showcase to the world that globally established rules are being followed for projects financed by China under CPEC.

There are now reports emanating from Pakistan that construction of the dam could commence in mid-2019 with money collected through internal donations in a fund created by the chief justice and the prime minister jointly. It is quite surprising and unconvincing that the impoverished public of Pakistan would be in a capacity to donate or even willing to donate such a large amount for a project of this nature. There is a strong possibility that the money has been surreptiously provided by friends like China and Saudi Arabia.

Considering the many fault lines that plague Pakistan, it is astounding to see the country hurtling ahead to make one mistake after another. It is not being able to control its fragile internal security situation where fundamentalist war lords are calling the shots; it is unable to resurrect its gasping economy or convince the international community to provide the oxygen required for the same. Yet, it is indulging in projects like changing course of rivers and building costly dams which will have a severe environmental impact leading to man-made environmental disasters of the type that are already being witnessed.

Against this backdrop, India needs to generate extensive pressure to ensure that the concerns that have been raised over the years are met in total by Pakistan. First is the disputed nature of the area and second more important is the plight of the people who are essentially Indian nationals stuck in a debilitating condition of occupation. India has an abiding responsibility towards these people that goes beyond the territorial dispute.