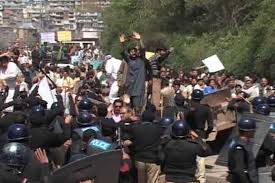 “If their (Pakistan’s) response is serious and credible, India is prepared to address all outstanding issues through dialogue.” This statement made by India’s Minister for External Affairs, Sushma Swaraj, at the United Nations General Assembly (UNGA) constitutes an apt and concise summary of what needs to be done by India and Pakistan to resolve the so-called “Problem of Jammu and Kashmir.”

The statement was made in response to a pitiable reference to Kashmir by Pakistan’s Prime Minister Nawaz Sharif during his address to the UNGA. Surprisingly, while making this pathetic attempt to divert the attention of the world from his country’s malevolent intentions towards India, PM Sharif chose to follow a route earlier taken by his bête noir, Pervez Musharraf.

Like Pervez Musharraf, he also came up with an infantile four point “Peace Initiative.” He spoke grandly of demilitarisation.  The whole world knows that his country stands wholly responsible for incessant ceasefire violations and heavy artillery fire along the Line of Control (LOC). The Pakistan Army leaves no option for India but to retaliate with force. The end result is immense damage to civilian life and property on both sides.

Nawaz Sharif also spoke of, “Consultations with Kashmiris who are an integral part of the dispute.”

One wonders as to which Kashmiris PM Sharif was referring to. The Kashmiris of Jammu and Kashmir have rooted for democracy. Their elected representatives govern the state. They have access to all national assets and facilities in areas of health, education, job opportunity etc. and are very much a part of the evolving India success story.

The elections that are held in a timely, free and fair manner and in which people come out in large numbers to vote, are a referendum in favour of freedom, democracy and the Indian Constitution. So, where is the need for any further consultation?

Export of terrorism by Pakistan to Jammu and Kashmir is, by far, the most serious problem being faced by the people of Jammu and Kashmir. This matter was adequately flagged by the Indian delegation at the UNGA.

Pakistan has, for ease of management, divided the area into two entities, Pakistan Occupied Kashmir (POK) and Gilgit-Baltistan. This facilitates suppression by the principle of divide and rule. Both entities have been given a sham system of self governance with actual power vested in the draconian Ministry of Kashmir and Affairs in the federal government.

The travails of the people living in these occupied territories remain hidden from the world because of the media restrictions imposed in the region. There is hardly any newspaper being published over there, what to talk of electronic media. The world gets to see only the few video clips that are smuggled out and shown by freedom fighters of the area living in exile across the globe.

The brutality of the establishment is clearly visible in this footage which is available on social media.  In these videos, people are seen protesting in vast numbers against the Government and the army of Pakistan and the puppet regimes installed in the occupied territories. A very clear message emanating from these areas is that the people wish to rid themselves of the Pakistani colonial yoke.

The Pakistan Army suppresses such legitimate protests in the most brutal manner. Direct fire is opened on crowds. Many are taken into custody never to be seen again.

The public, however, is undeterred. While making vehement demands for freedom, the people openly say that living conditions on the Indian side of the LOC are much better. They admit that economic, social and developmental parameters are much higher in Jammu and Kashmir and that too within the ambit of freedom and democracy.

The list of Pakistan’s brutality in POJK is so long that it cannot be covered in a single article. Some salient points, however, are highlighted here.

Apart from being in political doldrums, POK is reeling under the effect of natural calamities. It had not got over the devastating earthquake of 2005, when it was, once again, afflicted by distressing floods in 2014. On September, 7, 2014 Pakistan Prime Minister Nawaz Sharif visited the flood affected areas of POK. He was greeted with slogans of “Go Nawaz Go,” reflecting clearly the frustration of the people.

No attempt is being made to ameliorate the suffering of the people. Vast aid that came by from international donors is routed to militant organisations like the Jamaat-ud-Dawa to be used for terror activities against India rather than relief.

It is also well known that Pakistan has, in blatant disregard to the disputed nature of Gilgit-Baltistan, ceded vast territories of the region to China. China also has a clear run to exploit the region for facilitating the ambitious China-Pakistan Economic Corridor (CPEC), which is expected to give a massive USD 42 billion boost to the Pakistani economy. When the corridor does come up, it is the people of Punjab who will benefit, not the people of Gilgit-Baltistan.

Sadly, the large volume of data available on Pakistan’s suppressive policies in POJK has not resulted in a Government of India led international initiative to prevail upon Pakistan to change its policies. Most previous governments in India chose to remain silent spectators.  As a result, the people continue to suffer. It is encouraging to see India finally taking a firm stand on POJK in the United Nations. India must take responsibility for its citizens wallowing under foreign rule. Vigorous action should now be taken to bring to the notice of the world the well documented plight of the people of POJK.