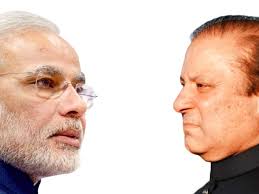 Prime Minister Narendra Modi’s consistent efforts to highlight to the global leaders, the need to unite in the fight against terror received a big boost during his recent meetings with United States President Donald Trump and Prime Minister of Israel, Benjamin Netanyahu.

The joint statement issued post his meeting with President Donald Trump deviated significantly from the traditional script and openly pulled up Pakistan for its role in the spread of global terror.

The outcome of the meeting has left Pakistan dumbstruck in the face of its isolation from its most enduring ally – America.

The welcome that Prime Minister Modi received in Israel and the large areas of cooperation that were discussed, mainly in the field of defense production and cyber security, is also being perceived as a big setback by Pakistan. More so because Pakistan and Israel have no diplomatic relations and close ties between Indian and Israel are not good news by the country.

The insecurity and tension that Pakistan is feeling due to the aforementioned developments is quite visible from the bravado that it is trying to project to salvage its fast deteriorating image.

Pakistan media has been quick to highlight a visit to the country by the American Republican Senator, John Cain around the same time that Modi was in the US.

The senator was taken to South Waziristan to demonstrate the gains being made by the Pakistan Army in containing militancy over there.

Later, while highlighting the importance of Senator Cain as the chair of the Senate Armed Services Committee a valiant attempt has been made to give an impression that the he looked upon Pakistan as an important ally imperative for “stabilisation in the region” and how the US was neutral so far as Kashmir is concerned.

Pakistan media further speaks of criticism of Secretary of State Rex Tillerson by two republican Senators, Lindsey Graham and John Cain, for lack for lack focus on Pakistan and Afghanistan.

The element of lobbying which is an integral part of US politics is very much visible in the instances quoted above. Such postures may impress the simple and ignorant people of the country but they hold no value in the international community.

What Pakistan seems to have conveniently forgotten is that the words of Senator Cain and Graham hold no meaning when the US President himself has articulated a shift in policy so far as the country is concerned!

It is also very interesting to see how columnists and writers in Pakistan have risen to create opinion that would help ease the pressure on their beleaguered leadership and save the country from being typecast as a global pariah.

They are making concerted attempts to project the perfectly righteous postures being adopted by the Indian prime minister as a devious plan to isolate Pakistan and adversely impact an investment climate that, they say, is gravitating towards their nation.

It is well known that no country in the world except for China even looks at Pakistan as an investment destination. China too does so in with a long term objective of converting Pakistan into its extended colony to serve its economic and geo-strategic interests.

The doomsday brigade in Pakistan is also in full swing! Volumes are being written on the instability that will come by due to a “military imbalance” in India’s favour that the Indo-US strategic partnership would bring about. It is being prophesied that India under Modi and with US support would be emboldened into increasing the threshold of conflict by crossing the line of control.

An attempt is also being made to drive a wedge in the growing relationship between India and the US. The contention being played out is that US under Trump will look towards exploiting India economically by opening up the trade regime. It is being ominously noted that India will be forced to compromise her foreign policy if not independence. In a rare concern for India, Pakistani columnists are articulating that the growing friendship with the US will adversely impact Indo-Russian ties.

All the points being flagged by Pakistani columnists do not stand the test of logic. So far as military balance is concerned, Pakistan stands nowhere in front of India’s military might. If India had the intention of decimating the country militarily she would have done to a long time back. India’s military hardware procurement policy (which involves many nations other than US) is designed to ensure the defence of the country more than facilitating invasions.

So far as exploitation of the Indian markets by the US is concerned, Pakistan need not worry since Indian businessmen, unlike their Pakistani counterparts, know how to conduct international business. Whatever happens will benefit both parties involved whether it is the US or any other country.

India-Russia ties are too deeply embedded to be threatened by the relationships that the two countries build with other countries independent of each other.

Pakistan is looking at Indian diplomacy through the prism of its own diminished status. It does not realise that India today stands out as a most respected country in the world due to her values, financial clout, military might, technological advancement and the vast pool of professionals who hold the potential to drive the economy of the world.

That Pakistanis rattled by the fast paced events and changes in global policies and postures is quite evident. It is sad to note that Pakistan continues to be shy of looking at reality in the face. Instead of affirmative action to allay the legitimate fears of the world it is looking for scapegoats, especially in its neighbourhood, to put the blame of its troubles upon. Despite the writing on the wall the Pakistani leadership is not ready to look inwards and do what is best for the country, it is here that the misfortune of the people lies and not in what India does or does not do.

(Mehtab Karan Singh is a US based engineer and columnist)