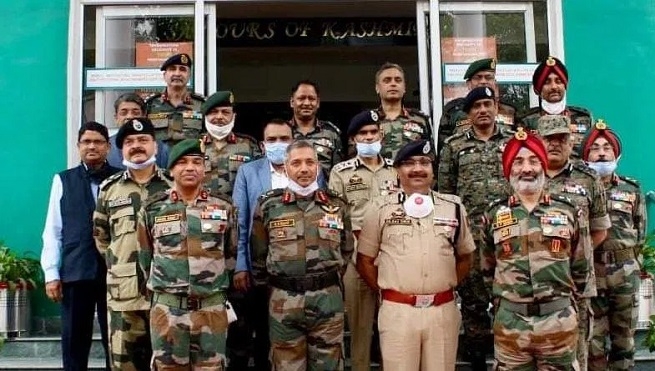 The Northern Command of the Indian Army, with its headquarters located in Udhampur and three Corps looking after the sensitive areas of Jammu region, Kashmir Valley and Ladakh respectively, quietly celebrated its 49th Raising Day on June, 17, even as the Indo-China confrontation in Galwan Valley and other places along the Line of Actual Control (LAC) raged on. The Command, that is responsible for the most sensitive operational theatre of the Indian Army, is definitely living up to its motto, “Forever in Operations.”

Only two days prior to the Raising Day, its brave troops added yet another glorious chapter in its history by giving to the Chinese a bloody nose in Galwan Valley, Ladakh. While the preoccupation of the hyperactive media remained on Ladakh, the Command has been engaged in a series of successful operations along the Line of Control (LOC) and the International Border with Pakistan.

On 19, June, the General Officer Commanding the Srinagar based 15 Corps (Chinar Corps), Lt. General BS Raju, in the presence of J&K Director General of Police (DGP) Dilbag Singh stated that the security forces have neutralised eight terrorists in the last 24 hours. Please note that this was the time when the turmoil over the Galwan incident was at its peak. The command, therefore, was operationally committed on multiple fronts. One of the encounters mentioned was particularly sensitive since the terrorists had holed up in a Mosque; the security forces used extreme restraint and eliminated the terrorists without causing any damage to the structure.

On June, 20-21, within days of the senior officers having addressed a press conference, Indian Army with other security forces was successful in eliminating four more terrorists including a foreign national. The first encounter took place on June, 20, at Likhdipora area in Kulgam and led to the elimination one Tayab Waleed, a terrorist of Pakistani origin and operational commander of the terrorist organisation Jaish-e-Mohammad (JeM). He was an expert in making IEDs and a sharpshooter. The very next day, three local terrorists were killed by security forces in the Zadibal area of District Srinagar. Their families were called in to convince them to surrender but they refused to do so. Two of them identified as Shakoor Farooq Langoo of Bharthana, Srinagar and Shahid Ahmad Bhat of Semthan, Bijbehara had been active since 2019. Lango had been involved in the killing of two BSF personnel near Pandach Chowk on May 20 during Ramzan.

Even as these concerted and relentless counterterrorist operations were going on in the hinterland of Kashmir, ceasefire violations were reported at Poonch, Nowshera (twice), Tangdhar and Rampur in District Baramulla. The spread is indicative of the fact that Pakistan kept the LOC on both sides of the Pir Panjal range heated up with incessant cross border firing.

In another significant incident, the Border Security Force (BSF) deployed on the International Border at Kathua in Jammu region shot down a Pakistan drone that was carrying into Indian territory a sophisticated US made M-4 Carbine Machine Gun with adequate ammunition and seven Grenades. These weapons were obviously meant to boost up the sagging morale and equipment deficiency of the terrorist cadre operating in Jammu and Kashmir, especially the foreign terrorist of the JeM who are known to prefer the M-4 series of Rifles.

The nexus between Pakistan and China becomes quite apparent here. While China is engaged in the treacherous incursion in Ladakh Pakistan has been called upon to increase activities in Kashmir, along the LOC and the IB in order to keep the Northern Command engaged and thus divert attention of the senior military commanders.

While planning this evil collusion the nexus did not cater for the versatility and professionalism of the Northern Command. Quietly, steadily and very successfully it has managed the multiple assaults and inflicted defeat after defeat on the enemy. There is no tension visible right from the troops on ground to the senior commanders; the mood, in fact, is upbeat and morale is sky high.

There would be very few armies in annals of military history that are written about so extensively and minutely as the Northern Command. The writings on the Galwan incident itself would fill at least a hundred books, what to talk of the continuous media engagement on the situation in Kashmir.

On Ladakh, every military veteran, retired diplomat, academician and journalist is giving his/her penny worth opinion. While most are appreciative of the courage and fortitude of our boys and the professional manner in which the leadership of the Command is handling the situation, there are a few negative views being presented. These stand exposed as hollow and being the outcome of some vested interests.

The clash took place in the Galwan Valley due to a structure built by the Chinese at Patrolling Point 14 bang on the LAC to which the Indian side raised objects. Now the structure is no longer there. So, who won?

While our so-called experts remain engaged in discussing the problem till the cows come home, the Northern Command is steadily building up its strength to face any and every challenge including all out war. In this preparation, it has the unremitting support of the Government and the entire Nation. The Air Force and Navy are also poised to come forward to assist.

The troops of the command and their leadership have nerves of steel. Nothing can deviate them from their sworn commitment to guard the sovereignty of their beloved nation. When forces scared of their success speak ill of them and spread misinformation/canards they simply ignore it, as all good soldiers should, and carry on doing their duty. They are very sure that whatever some vested interests may say the whole nation looks upon them with absolute confidence and great pride. The Nation wishes All Ranks of Northern Command on their Raising Day and assures them that each and very loyal Indian stands rock solid behind them.

(Onkareshwar Pandey is a Delhi based senior journalist)