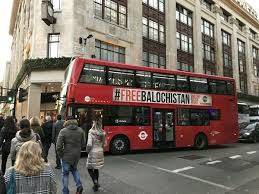 Pakistan is, quite apparently, rattled by the extensive support that the call for a “Free Balochistan” is getting across Europe. Its foreign office is engrossed in attempts to scuttle the meetings and demonstrations being organised by the Baloch activists in many European countries with increasing frequency. The meetings and demonstrations are successfully creating awareness about the atrocities being committed on the Baloch people by the Pakistan Army, in full knowledge of the Government of Pakistan.

The Pakistani panic became visible in mid-November when, at the specific request of Islamabad, the Swiss authorities detained Baloch activist Mehran Marri and his family at the Zurich airport.  Marri, who otherwise lives in Germany, had gone to Switzerland to attend a Baloch unity meeting organised by his brother-in-law and fellow activist Brahumdagh Bugti who is the leader of the Baloch Republican Party (BRP).

This act by the Swiss authorities has been widely condemned by, not only the Baloch activists, but also other prominent European personalities.

Prominent among these is Francesca Marino, co-author of “Apocalypse Pakistan.” In her article titled, “Mehran Marri story, or the attempt to silence the voice of unrepresented people,” published in Stringer Asia, Marino has said that the various measures being taken (To scuttle Baloch activism) carry the mark of Pakistani intelligence.

Marino goes to on to establish Marri’s contribution in tirelessly espousing the cause of the thousands of Baloch people who have mysteriously gone missing and are believed to have been tortured, killed and buried in mass graves.

Refusing to be cowed down by the unsavoury act of the Swiss authorities, the Baloch activists shifted the focus of the anti-Pakistan campaign to London where the World Baloch Organisation (WBO) launched a mobile awareness   campaign in late November. Several mobile vans with huge billboards are roaming around prominent locations in the city, including the embassies of Pakistan and China, with #Free Balochistan advertisements.

The High Commissioner of Pakistan in the United Kingdom hit the ground running with his complaint against the advertisements. He along with one pliable person of the general public lodged a complaint on the ground that the campaign was “irresponsible and offensive” to the Pakistani Diaspora since Balochistan is an “Integral part of Pakistan.”

The British, happily, are made of sterner stuff than the Swiss. United Kingdom‘s Advertising Standards Authority (ASA) refused to take any action with respect to the complaint. “I have informed the complainant that we will not pursue the matter because, based on the facts available to us, there doesn’t seem to be a breach of the UK Code of Non-Broadcasting Advertising (CAP Code),” a letter from the Complaint Executive of the organisation read.

At about the same period of time, the issue of human rights abuses in Balochistan was raised in the Foreign and Commonwealth Office of the United Kingdom by Conservative Party leader, Bob Blackman, adding to the embarrassment of Pakistan.

The aforementioned incidents give a clear indication that the Government of Pakistan can no longer keep the state sponsored human rights abuses in Balochistan under wraps. The issues are being raised by the Baloch activists relentlessly across Europe. Most governments are sympathetic to the cause of the oppressed people since they are convinced about the truthfulness of the reports being presented.

There is ample reason for this conviction of the European leaders and the resultant support. For decades in Balochistan, economic exploitation through the plundering of natural resources and systematic economic, social and political exclusion of indigenous Baloch people, has become a norm. In addition, enforced disappearances, extra-judicial killings and an escalating crackdown on freedom of expression are used as covert tools to brutally repress the Baloch peaceful struggle for justice, rights and equality.

Even as the protests and counters were on in Europe reports emanated from Balochistan about the abduction by Pakistani security forces of the sister of Baloch leader Dr. Allah Nazar . According to the local sources, Dr Nazar’s sister, Noor Khatoon, and their cousin Sahib Dad, were arrested and taken along with other family members by Pakistani forces during a military operation in Mashkay, Balochistan. “Pakistan Army has killed a woman, a child and eight innocent Baloch civilians in Gajjali, Mashkay. While 60 other women are in Army custody. Our appeal to world powers is to take action against terrorist state Pakistan,” tweeted Dr Nazar.

In her article referred to above, Francesca Marino has said the situation in Balochistan  is no better than Tibet. She has opined that, Pakistan is proactively and deliberately suppressing the agitation of Baloch activists in Europe that were first conducted in Geneva and have now expanded on to London’s taxis and buses.

Pakistan must realise that the policy of deceit and perfidy that it is pursuing is unsustainable. The world is not as stupid as the egoistic Punjabi Muslim leadership of Pakistan would like to believe. Everybody is aware and concerned about the atrocities being committed by the Pakistan Army in Balochistan, Gilgit-Baltistan and the North-West frontier region. The world is sensitive to the threat being posed to global security forces by fundamentalist militants like Hafiz Saeed, Haqqani network, Syed Sallahuddin and Maulana Masood Azar.

Switzerland is a small ineffectual country; its temporary support due to some compulsions should not be taken by Pakistan as an indication of world opinion. What happened in London and the disgust being voiced worldwide by the intelligentsia and the political leadership is the reality of its standing in the international community. It is time for Pakistan to get its act together and change its policies, failing which, it will regress into international isolation and ignominy.

(Jaibans Singh is a reputed author, analyst and commentator)