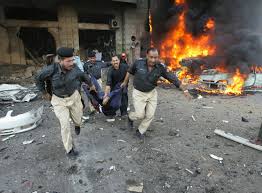 Every year on February, 5, Pakistan plays out a charade of celebrating “Kashmir Day.” This year also the usual functions were held by militant organisations and the usual statements were made. “Pakistanis must not back an inch from their position on Kashmir.” “We should celebrate Kashmir Day in such a way that the dream of hundreds of thousands of Kashmiris is materialised.” These are just two examples to illustrate the tone and tenor of the speeches that were delivered by internationally wanted terrorists like Hafiz Saeed on the streets of Pakistani cities right under the nose of the very authorities who have a moral responsibility to arrest them.

What Pakistan and its militant hordes have failed to realise is that in Jammu and Kashmir the actual dream of hundreds and thousands of Kashmiris, Hindus, Sikhs, Christians, Buddhists and other communities stands materialised. They voted in large numbers for a democratic, representative government and they have got the same despite many attempts, covert and overt, by our neighbour to scuttle the same.

A coalition government of the Bharatiya Janata Party (BJP) and the Peoples Democratic Party (PDP) was sworn- in on 01 March 2015. What is of significance and interest is the reaction from neighbouring Pakistan.

The unhappiness with the course of events is quite evident from the manner in which the swearing-in of the new government has been covered in Pakistani newspapers and television channels. The thrust of all write-ups and discussions was on “Hindu nationalists entering government in India’s only Muslim-majority state.” This is very obviously a coarse attempt to instigate the Muslims of Kashmir and engineer religious polarisation in the state. This regressive viewpoint was supplemented with liberal warnings by so-called “analysts” that the coming together of two ideologically different parties could fuel discontent among Hindus in Jammu as well as Muslims in the Kashmir valley leading to disaster.

Jibes were directed by Pakistani writers and journalists at Chief Minister Mufti Mohammad Sayeed quite liberally. His embrace with Prime Minister Narendra Modi after the swearing-in was referred to in a manner that would raise passions amongst Muslims on both sides of the line of control.

A few days before the formal announcement of the coalition, the Pakistan Army Chief, found time from the civil war being fought in North Waziristan to visit the forward areas along the line of control and meet civilians “affected by Indian firing.” He also issued a stern warning to India of a “befitting response” to any provocation. The actual motive of his visit was to whip up passions in the Kashmir valley and put pressure on the PDP at a time when it was reaching to a consensus for a coalition with the BJP. Pakistan played out the “Islam” card in a most blatant and abhorrent manner.

What Pakistan is doing cannot be set aside as a laughable attempt to generate adverse propaganda. There is a need to dwell on the sinister motive behind these obnoxious utterances and machinations. The belligerence that Pakistan has been exhibiting since the last few months was part of a grand plan to exploit a perceived situation of weakness in the state.  Now that the government is in place it is becoming quite evident that Pakistan will pull all stops in its attempts to subvert, disrupt and divide the region.

Pakistan has failed miserably in all of its scheming to wrest Jammu and Kashmir from India. Despite its best attempts the sate has emerged stronger. It boasts of a robust democracy and complete freedom. It is well on the way to peace and prosperity having left the shadow of the gun far behind. It is to the credit of the people that, notwithstanding, all attempts to subvert the election there was unprecedented voting which has led to the swearing-in of the most representative government ever in the state.

Pakistan, on the other hand, is paying a terrible price for its malicious intentions. Subramanian Swamy has most aptly described the country as a “crucible of terror.” The terror modules that the country created to target India have now turned against their own masters, the best example being Tehreek-e-Taliban Pakistan (TTP).

The insurgencies in Balochistan and North and South Waziristan have become festering wounds with no hope of a solution. The Pakistan army is using weapons of mass destruction like Artillery guns and air strikes against its own people which is quite ghastly. The internally displaced people (IDP’s) running into millions is a problem of massive dimensions that the government of the country is refusing to even acknowledge. To its eternal shame, the persecution of minorities by militant organisations is creating a terrible human rights crisis in the country, Hindus and Christians have almost been decimated and now the Shia’s especially in Gilgit-Baltistan have become prime targets. With the Islamic State (IS) gaining a foot hold in Pakistan the Shia’s are in grave danger indeed.

It would be best for Pakistan to look at reality in its face. The people of Jammu and Kashmir, including the Kashmir valley have long since moved on, they do not require any kind of support from the country – moral, diplomatic, political or military. A small and select lobby based in Kashmir is egging Pakistan on for personal gains. It feed the Pakistani leadership with all sorts of lies and misinformation to garner funds.

The writing on the wall is that Pakistan should give up the agenda of wresting Kashmir from India and instead focus all energy toward ensuring its own survival. Sadly, nobody in Pakistan will heed this sound advice. India, therefore, is left with no course but to prepare for a more belligerent and nasty onslaught on is freedom, sovereignty and integrity in Jammu and Kashmir. The need for security consciousness and vigilance now is more than ever since a defeated Pakistan will react with pronounced belligerence.