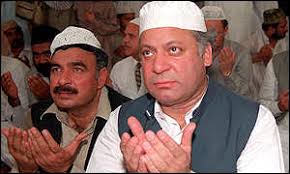 In the course of history there are innumerable instances of political power being usurped through deceit. The world has seen proxy rulers, all powerful regents to monarchs, alternative power centers et al. In the modern context, where democracy and empowerment of the people has emerged as the most preferred and acceptable political choice, many dictatorships and authoritarian regimes exercise absolute power through sham democracies and pocket bureau representatives of the people.

Pakistan is one such nation where authoritarianism of the army has remained omnipresent with or without the garb of democracy. It has seen many outright dictatorial regimes and some democratic interludes. In the last decade or so the Pakistan army has realised, to its absolute delight, that it can enjoy all authority without any responsibility by installing a puppet democratic regime and that has become the bedrock of its political strategy.

Now, the nation is poised for a General Election scheduled to be held on 25, July, 2018. The election will be significant to the extent that it would mark the second time in the history of the nation that a democratic handover of power will take place without military rule in between. The element of “Democracy” in this exercise to elect a government is, however, very suspect. The Pakistan Army has gone all out to script the situation where its current lackey, Imran Khan, would win the election and thus would be installed a government that is subservient to the real monarch, General Qamar Javed Bajwa, Chief of Army Staff of the Pakistan Army. In fructification of this unholy agenda the Army has full support of the judiciary of the nation.

It is well know that the former Prime Minister of the country, Mian Nawaz Sharif, is embroiled in a corruption case along with most members of his family. He is presently out of the country but has declared his intention to come back. He will be arrested the moment they set foot on Pakistani soil as also will be his daughter Maryam who is his political heir. The father-daughter duo is presently looking for ways and means to at least once address their people before being cloistered into some god forsaken jail of the country. Their intention is to gain sympathy and swing votes, which is unlikely to happen.

Not satisfied with the literal coup that has been orchestrated against the ruling party, the Army zealously aided and abetted by the judiciary, has put other competition of Imran Khan also in the dock. Asif Ali Zardari, former President of the country and the tallest leader of the Pakistan People’s Party (PPP) has been put on the run with issuance of a “restriction of movement” order in a case of money laundering being investigated by the Federal Investigation Agency (FIA). Both Zaradri and his sister Faryal Talpur have been barred from flying abroad. Their close aides, Hussain Lawai and Taha Raza have been detained by the FIA on accusation of facilitating the opening of 20 fake accounts in different banks.

Pervez Musharraf, another former President and army chief who harbours ambitions of becoming Prime Minister of the country through the process of democratic election, is also running around to save himself! The National Accountability Bureau (NAB) has summoned him and his family members in connection with a pending enquiry into, “Misuse of power and accumulation of assets beyond known means of income.” This process has been set in motion on the basis of a complaint filed by a retired army officer, Lt Col (Retired) Inam-ur-Rahiem, who is nothing but a small pawn in the larger political game being played out by the Army. NAB has summoned Musharraf and his wife Sehba Musharraf on July, 10, while his children Bilal and Ayla and his son-in-law Asim Raza have been summoned on July, 11. All okay and above board if it was not so tantalisingly close to the general elections.

Buoyed by this windfall of support, Imran Khan and his PTI are in full election mode. His party has been accused by the PPP of giving advertisement of defamatory content against its leader Asif Ali Zardari.  The complaint has been lodged with the Election Commission of Pakistan. Despite the pressure being exerted on the leaders there is speculation of the PML (N) returning to power with the PTI emerging as a close second. Under these circumstances widespread rigging aided and abetted by the Army remains a strong possibility.

It is notable that Pakistan has already abrogated two Constitutions while the third which is now in place has been suspended twice by military dictatorships. Now the existing Constitution is being usurped in a novel manner by installation of puppet governments while the military rules the roost. India, a much larger country that gained independence at the same time as Pakistan has been abiding with its first Constitution and is looked upon and the largest functional democracy in the world.

Pakistan that was created by its founders like Mohammad Ali Jinnah and Liaqat Ali Khan with the ideology of secularism and democracy within a Muslim majority set up. It is very sad to see the country  now forsaking all ideals of its founding fathers by shaping itself as Sunni Muslim centric Islamic State with an authoritarian political dispensation remotely controlled by the Army. Many political thinkers in Pakistan like Shahid Javed Burki are openly advocating a more authoritarian approach to governance by terming the same as an emerging option globally. Such thought process is being generated to give to the Pakistan Army a shot in the arm for continuing with its manipulations.

India has every reason to be concerned by the political development in the neighbouring country since they point towards a continued era of internal instability, rise of Islamic fundamentalism and a muscular policy with Kashmir as the centre of gravity. It is time to remain ever vigilant, more so in Kashmir!

(Mehtab is a US based Engineer with interest in Geo-politics)