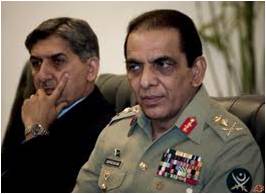 In the wake of the now famous Abbottabad raid, a dangerous mix of humiliation and desperation prevails in the Pakistani Army and the ISI. For ISI, the humiliation arises from the fact that its connivance to provide sanctuary to Bin Laden in the middle of Pakistan for over five years got exposed in a very sudden and drastic manner leaving it with no time for a cover up or damage control. The humiliation for the Army arises from the fact that it was unable to detect and prevent the intrusion of US choppers or their escape with the body and a large quantity of incriminating evidence. The resultant fear is that evidence taken from the house may indict many influential people from the two establishments.

The ISI has long faced accusations of meddling in neighbours affairs. Recently, a range of officials inside and outside Pakistan have stepped up suggestions of links between the ISI and terrorist groups. In 2006, a leaked report by a British Defence Ministry think tank had charged, “Indirectly Pakistan (through the ISI) has been supporting terrorism and extremism, whether in London on 7/7 (the July 2005 attacks on London’s transit system), or in Afghanistan/Iraq”. In June 2008, Afghan officials accused ISI of plotting a failed assassination attempt on President Hamid Karzai; shortly thereafter, they implied the ISI’s involvement in the July 2008 attack on the Indian embassy. Pakistani officials have, of course, remained consistently in denial mode.

Significantly, even the USA is accusing ISI of supporting terrorist groups. In a May 2009 interview US Defence Secretary Robert Gates had said “to a certain extent, they play both sides.” Gates and others have no compunction in suggesting that ISI maintains links with groups like the Taliban as a “strategic hedge” to help Islamabad gain influence in Kabul once Americans exit the region. These allegations re-surfaced in July 2010 when Wikileaks made public a trove of US intelligence records describing ISI’s links to militant groups fighting NATO forces in Afghanistan. Recently, during a visit to Pakistan, Admiral Mullen pointed to ISI’s links with the Haqqani network. “The ISI probably would not define what they’ve done in the past as ‘terrorism,'” says William Milam, former U.S. ambassador to Pakistan implying implicit justification of the disruptive policy of the State.

Constitutionally, the ISI is accountable to the Prime Minister. However, most of its officers are from the army, so that is where their loyalties lie. Until 2007, Musharraf exercised firm control over it but with a civilian government in power this control has gradually eroded. In July 2008, the government even announced that ISI will be governed by the interior ministry, but was forced to revoke this decision within hours. In November 2008, the government managed to disband ISI’s political wing which was responsible for meddling in domestic politics. Experts, however, saw it as a move by the Kayani led army to distance itself from politics. Bruce Riedel, a South Asia expert at the Brookings Institution, says the civilian leadership has “virtually no control” over the Army and the ISI. Nawaz disagrees, saying that the ISI does not function independently, “It aligns itself to the power center, and does what the government or the Army asks it to do,” he adds. With a reported staff of ten thousand, ISI can hardly be considered monolithic.”Like in any secret service, there are rogue elements,” says Frederic Grare, a South Asia expert.

Following the Soviet withdrawal, the ISI continued its involvement, first supporting resistance fighters opposed to Moscow’s puppet government and later the Taliban. This support continued up to 9/11. Though any current support for the Taliban is vehemently denied, Pakistan stands accused of continuing with its original policies. Afghan President Hamid Karzai has repeatedly stated that Pakistan is training militants and sending them across the border. In May 2006, the British Chief of Staff for southern Afghanistan had told the Guardian, “The thinking piece of the Taliban is out of Quetta in Pakistan, it’s their major headquarters.” Kathy Gannon, who’s covered the region for decades for the Associated Press says, “If they’re giving them support, it’s for access back and forth (to Afghanistan) and the ability to find safe havens. Supporting the Taliban allows Pakistan to hedge its bets, once the NATO coalition pulls out of Afghanistan.

Pakistan’s troubled relations with the current Afghan leadership (partly because Karzai has forged strong ties with India) mean that they need a strong presence there. According to another expert Weinbaum, Pakistan has two policies. One is to officially promote stability in Afghanistan; the other unofficial one is to support Jihadis in order to appease political forces within Pakistan.”The second (policy) undermines the first one,” he says. As per Nawaz, there is ambivalence within the Army regarding support for Taliban.”They’d rather not deal with the Afghan Taliban as an adversary,” he adds. This policy is being leveraged through the Haqqani networks links with the ISI. It is thus their ‘strategic asset’, a reliable back-up force in case things go sour.

India implicated ISI for the November 2008 Mumbai attacks. Extensive evidence was provided to establish ties of the agency with groups like LeT, Hizbul Mujahedeen, JeM, and many others, which it supports to fight in Jammu and Kashmir. India has also established the ISI link in masterminding the July 2006 bombing of Mumbai commuter trains. There is no case in denying the fact that Zia’s policy of bleeding India with a thousand cuts remains firmly in place. In the future, one cannot also rule out ISI provoking an incident in order to put India and Pakistan on a collision course. As such, there is an urgent need to mobilise our intelligence efforts to counter terrorist carnages in the future. India needs to accept the ISI’s monstrous capabilities remain prepared to take counter-measures.