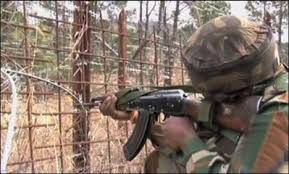 Politics of the “line of control” are taking a bizarre form of late. It is almost like a game of chess being played with human being as the pieces. Combatants and civilians are being killed, property is being destroyed, routine activity has come to a halt in the forward areas, in some cases even migration is taking place; yet the power centers of the two countries are playing politics. Blame game is at its peak, egged on by the media, and general confusion that gives birth to rumours is the order of the day.

Of late, the media has taken on the statement by Omar Abdullah, Chief Minister of Jammu and Kashmir, asking the Government of India to explore other “options” to deal with Pakistan. He should be giving some suggestions about the “options” that he has in mind; no point in throwing a political “Googly” at his own coalition partner. The sudden change of heart of the Chief Minister is also an interesting development. Not too long ago, he was voracious in his demand for revocation of the Armed Forces Special Powers Act much against the sound counsel of his advisors in the Unified Command. Omar is now extolling the security forces to be more vigilant and to follow standard operating procedures to avoid losses. He should have considered the negative effect that his demand for drawback of forces would be having on the soldiers deployed on ground to counter an extremely critical environment of terrorism; if the commander is not convinced about the righteousness of the cause how will the troops build the morale to fight? It is a known fact that Pakistan increases its nefarious India activity when it perceives a weakness in the political and military environment in India. There is a possibility that the chink in the security that was visible due to incessant demands of reducing the security threshold motivated escalation of the cease fire violations and infiltration. It is hoped that, in future, the Chief Minister of Jammu and Kashmir will realize the exceptional responsibility that he bears on his shoulders and will be more circumspect in his statements..

The role being played by Nawaz Sharif in this drama merits deep analysis and thought. There is a general feeling that Nawaz does not have any say in the matter of Kashmir since the Kashmir policy continues to stay firmly in the hands of the Pakistan Army. If this is the case then how was the Pakistan army kept in check by the previous government? During the rule of the PPP government in Pakistan the situation was not very good but it was also not as bad as it is presently. It has to be kept in mind that whenever Nawaz Sharif he is in the chair, relations with India hit a nadir and military action takes the forefront. His effuse ministration about lasting peace is something that has, as yet, not passed the reality check. There is more to Nawaz than meets the eye, like a true politician he plays his cards very close to his chest and keeps all options open.

There is also talk of the escalation being a result of the armies of two nations getting into a private war of their own that is beyond the political mandate. This may be true of the Pakistan army but the Indian reaction needs to be seen in the right perspective. The political directive to the Army as articulated by the Army Chief in the public domain is to respond aggressively to any provocation along the line of control. This is exactly what the Indian troops are doing and they cannot be faulted for the same. The difference is that the Indian army will cease hostilities when called upon to do so but the Pakistan army will continue to follow its own path. As things stand today the decision taken at the level of the Prime Minister of the two countries to get the Director Generals of Military Operations (DGMO) across the table to resolve the cease fire violations issue has also not taken off. Obviously, political distrust has preponderance over the will to roll back aggression.

There are a few objectives that Pakistan could possibly have in mind while launching this misadventure. The most obvious objective would be escalation of levels of infiltration. This has failed miserably; there may have been sporadic successes but these are not beyond what happens every year and definitely not to the extent that cannot be managed by the security forces. Internationalising the Kashmir issue could also be an objective. Recently, there were many international events lined up where Pakistan normally rakes up the Kashmir issue. These include the recently concluded United Nations General Assembly (UNGA) meet, the cold vibe meeting between the two Prime Ministers on the sidelines of the UNGA, Nawaz Sharif’s ongoing official visit to the US and the visit of Prime Minister Manmohan Singh to China. Pakistan may be harbouring a misconceived notion that by heating up the line of control it would be able to build pressure on India in these forums. This objective has also fallen flat. Neither the United Nations nor the US have shown any inclination to intervene in Kashmir, China also would like to stay away from the dispute.

So what options does India have to deal with the situation? The best option would be to make Pakistan realise that such maverick behaviour has not reaped and will not reap any benefit. Pakistan’s intransigence should be exposed even as no doubt is left in anybody’s mind about India’s determination to give a befitting reply to military adventurism. In case good sense does not prevail then the only way out for India is to depend on the resilience of the Indian army and other security forces deployed in the region to counter all enemy designs. The repercussion of aggression on the line of control should be made unaffordable for Pakistan both militarily and politically.