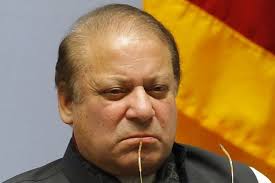 “Elected governments in Pakistan have less to fear from the Indian Army than from their own- with good reason. For almost 60 years, since October 1958, politicians have lost every battle to gain the higher ground of civilian supremacy,” these fateful words by a well known Pakistani author and intellectual, F.S. Aijazuddin, adequately sum up the current situation in Pakistan.

Nawaz Sharif was coming very close to being the first prime minister of the country to complete a full term in office. The Pakistan Army, this time round, has chosen a novel method to ensure that nothing of this sort happens.

The Supreme Court of the country has, in shameless acquiescence to the Pakistan Army, disqualified the incumbent prime minister of the country on flimsy grounds. The Court has charged him of violating Article 62(1)(f), which requires that Members of Parliament to be “sagacious, righteous, non-profligate, honest and amen.” It actually means nothing!!

By so doing, the Court has obviated the necessity of a military coup to dislodge the government and ensured that the military dominance of the polity is maintained.

Nawaz Sharif has chosen to pursue a political route to seek justice. He is holding a string of rallies to garner public support for himself.  “I was sent home in a minute by five judges. Isn’t that an insult to the votes of millions of people,” is the question that he is fervently posing to the people.

Experts feel that not much will be achieved from this exercise! Nobody in Pakistan has the guts to stand in the way of the army. In fact, even at this stage, Sharif is shying away from openly blaming the Army for his downfall. When he is himself running scared how can he expect his people to support him?

It looks as if he is looking at saving his party from a total debacle in the 2018 elections which will surely be scripted by none less than General Qamar Bajwa himself.

What would the ouster of Nawaz Sharif mean for Indo-Pakistan relations? There is no cut and dried answer to this poser in view of the complications and contradictions involved. The only thing that is certain is that things are not going to improve in the short term, more so, since Nawaz Sharif is perceived to be a friend of India, to the extent that any Pakistani prime minister would be allowed the luxury.

Sharif did make many attempts to extend a hand of friendship towards India. That the same could not be sustained due to pressure from the supreme authority in the country is a different matter altogether.

The real reason behind his the many about turns in his posture towards India is well known to all. His authority stood superseded by the so-called defenders of Nazaria-e-Pakistan (Ideology of Pakistan).

He has remained steadfast in his belief till the very end, as is evident from the manner in which he and his party have attempted to tackle the Kulbhushan Jadhav case. It would not be very wrong to suggest that the Indian would have been murdered by the Pakistani Inter services Intelligence (ISI) had not the Government of Pakistan put up a resistance, however tacit.

The meeting held by Sharif with Track-II emissaries of Prime Minister Narendra Modi like Indian steel magnate Sajjan Jindal, is a recent indicator of the seriousness with which the Pakistani premier looked at the possibility of a rapprochement with India

All, however, is not hunky-dory so far as the Pakistan Army is concerned. For one, it does not have a political alternative to Sharif and his party, PML (N). The Bhutto family led PPP does not have a strong standing, especially so, in the crucial state of Punjab. The Tehreek-e-Insaf (PTI) leader, Imran Khan, is too immature and impetuous to be of any use.

Even more critical is the China angle! The Chinese are terribly stung by the humiliation that they are facing in the Doklam incident. If they are compelled to withdraw over there, as it seems will be the case, they may call upon good friend Pakistan to show belligerence towards India. In other words, the proxy war would now be fought to further Chinese interests and Pakistan would be expected to do the same. Such a role would not suit the egoistic Pakistani generals at all, but, would saying no be an option? It does not seem so, considering the manner in which they have placed all of their cards on the China Pakistan Economic Corridor (CPEC) project.

In case something of this sort happens, the much talked of “colonial status” of Pakistan vis-a-vis China will stand established.

The weakening of Nawaz Sharif and PML (N) has created space in the political spectrum of the country that the Islamists are keen to occupy.  Being under house arrest has not deterred Hafiz Saeed, an acclaimed international terrorist, from moving ahead in this direction! His base organisation, the Jamaat-ud-Dawa has already floated a political party called Milli Muslim League that will follow the Jamaat ideology and strive to convert Pakistan into a “real Islamic and welfare state.”

The Pakistan Army will find it a lot harder to control and manipulate these organisations as it does the established political parties of the country.

To summarise, orchestration of the ouster of Nawaz Sharif by the Pakistan army is unlikely to accrue any short term gains, while the long term political loss in terms of  sovereignty issues, internal strife etc. is likely to be immense.

With Pakistan poised to either convert into a colony of an increasingly belligerent China or a hub of Jihadist, Islamic fundamentalism, India will have a lot more in her hands to deal with. The new set of challenges that will emanate from Pakistan will need perseverance, maturity and a strong national will to counter. The road ahead is going to be bumpy especially for Jammu and Kashmir.

(Jaibans Singh is an avid Pakistan observer, analyst and author)