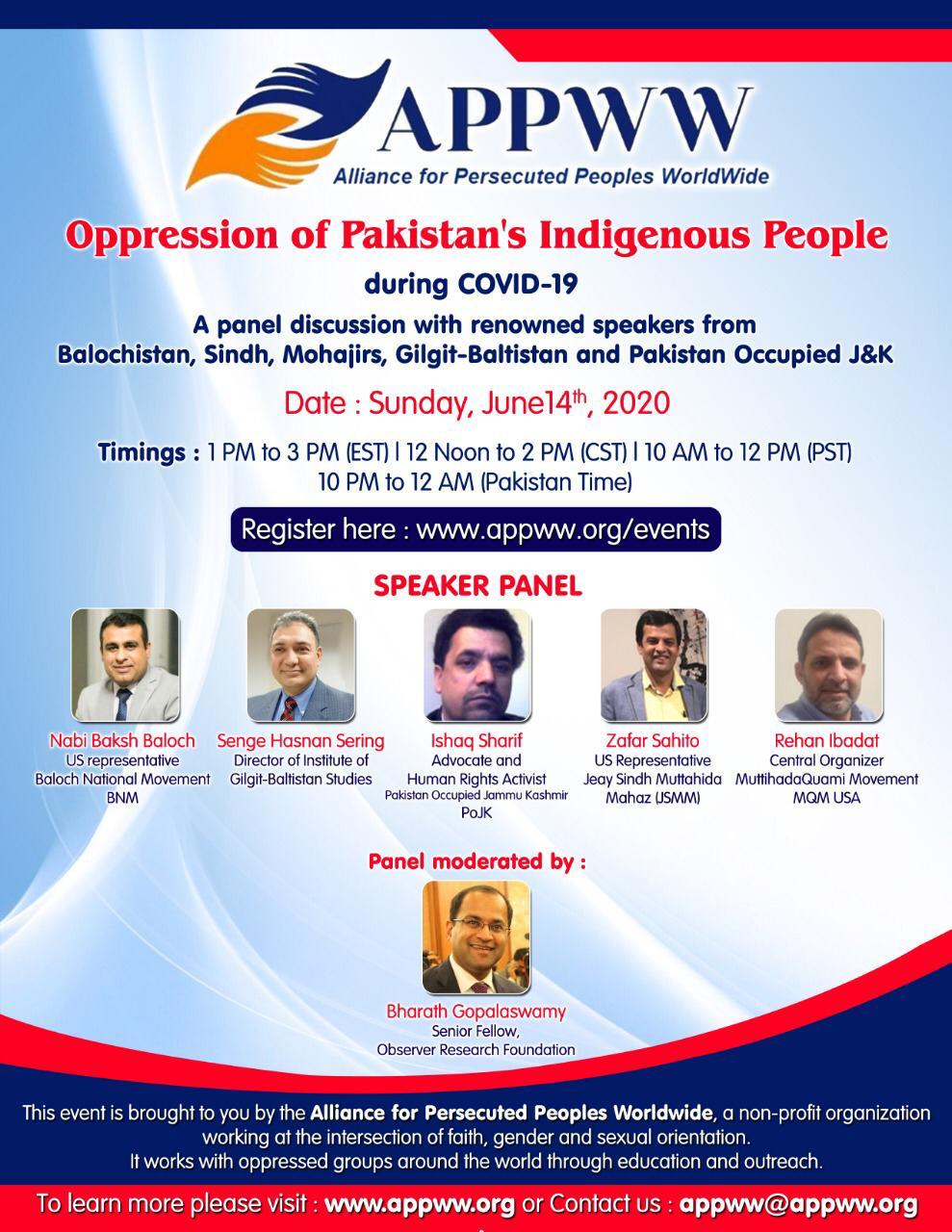 An international NGO “Alliance for Persecuted People Worldwide” (APPWW) recently organised a panel discussion on “Oppression of Pakistan’s Indigenous People.” The discussion was held against the backdrop of the COVID-19 situation in the country. Eminent persons representing the many oppressed regions of Pakistan and their people through various political parties, organisations and institutions were invited to speak in the discussion. The views give a deep insight into the very critical state of affairs within Pakistan as aggravated by the COVID crisis.

The situation in Gilgit-Baltistan was explained by Senge Hasnan Sering, Director of Institute of Gilgit-Baltistan Studies and an international activist for the cause of freedom of his people from occupation and oppression by Pakistan.  He said that since Gilgit-Baltistan is not a constitutional part of Pakistan there is a deeply embedded mindset of treating it as a colony. Now, the colonisation process has become two fold with China also getting involved in exploitation of the natural resources and the people of the region.

The situation created by the COVID-19 Pandemic has given an opportunity to the exploitative forces to go for massive land grab. There has been a huge movement of troops in the region at a time when medicines and not the army is the need of the people. In fact, COVID quarantine centres for Pakistan Army personnel have been opened in Gilgit-Baltistan to keep them away from the media glare in Punjab, these facilities are not open to the locals.

As it is, the region is short of medical facilities like hospitals and medical institutions and is now grappling with critical shortage in supply of medicines. For cash strapped Pakistan, Gilgit-Baltistan holds no priority whatsoever, hence, the feeble infrastructure has been stretched to breaking point. Spread of the Virus through China Pakistan Economic Corridor (CPEC) is also overwhelming the people. The Pakistan government is mulling over the feasibility of opening the region to tourists which will further enhance the risk factor. Senge Sering concluded with a demand for the justified amalgamation of the region with India.

The situation in Balochistan, another Province forcefully amalgamated into Pakistan and witnessing a violent insurgency as a consequence, was explained by Nabi Baksh Baloch, US Representative of the Baloch National Movement (BNM). He particularly emphasised the distressing lack of Protective Personal Equipment (PPE) for the Doctors which leaves them very vulnerable to infection. Those from within the medical fraternity who agitated for PPE were jailed by the authorities. This insensitive act by the authorities is the only instance of its kind in the world where a Government is arresting and harassing doctors during a medical emergency of such huge proportions.

As in the case of Gilgit-Baltistan, in Balochistan also the Pakistan Army is leveraging the situation to strengthen its occupation of the region and suppress the legitimate aspirations of the people.

Zafar Sahito, representing Jeay Sindh Muttahida Mahaz (JSMM) spoke of the historical significance of Sindh in the context of the overall Indian civilisation. In this ageless region the famed and legendary Saraswati River once flowed and the Vedas were written. It finds mention in both Ramayana and Mahabharta. In the modern context, Sindh was the first Province to financially uplift Pakistan with its industrial and commercial expertise. Now the proud and civilised people of Sindh have been made subservient to the Pakistan Punjabi elite which has no regard for their economic potential or civilisational roots.

Rehan Ibadat, central organiser of the Muttahida Qaumi Movement (MQM) a Sindh based political party that represents the Mohajirs (Muslims from India who opted to go to Pakistan) said that his people are facing lack of education opportunities, lack of  job opportunities and are being persecuted. Quite emotionally he said, “this is not what the Mohajirs came to Pakistan for.”

With regard to the COVID situation both emphasised that the federal Government has not  shown any keenness to impose a lock down on the cash cow region of the country which led to a rapid spread of the epidemic. Ultimately, it fell upon the provincial government to put its foot down and impose the lock down. By then a lot of damage had been done; thousands of cases with a huge spike in deaths in the region have gone unreported.

Tarek Fateh, a Canada based senior journalist  of Pakistani origin opined in the webinar that Pakistan died as a Nation in 1971 when 60 percent of its population and the complete eastern segment chose to seek independence, leading to the creation of Bangladesh.  What is now left of Pakistan had nothing to do with the movement that led to the partition of the country, North-West Frontier Province, Sindh, Balochistan , and territories of Pakistan Occupied Jammu and Kashmir did not make any demands of a separate Muslim nation. The concept was thrust upon them by the partition. The aforementioned Provinces do not subscribe to the concept even today and are agitating to break the shackles of West Punjab imposed over them through blatant use of military might.

The second catastrophe, according to Tarek Fateh, was imposition of Urdu as an official language of the new country. The language came from central India and to an extent from Punjab, the remainder of so-called Pakistan has no affinity with the language. It has over time created a cultural schism in the entire region.  Tarek Fateh concluded by saying that internal contradictions in Pakistan are so intense that a breakup of the so-called Nation is inevitable; it is only a question of time.

The world has changed manifold but the problems in Pakistan do not change. It is so because all Provinces of Pakistan should be separate nations in their own right but are being forcefully subjugated and exploited by the Punjabi rulers. Sadly, until the breakup foretold by Tarek Fateh does not become reality inhumane suppression accompanied by gross human rights violations will continue. The world leaders should step in to help free the people from the shackles of de-facto military rule, supported by terrorists and fundamentalist militant warlords.

(Jaibans Singh is a Geo-strategic analyst, columnist and author)