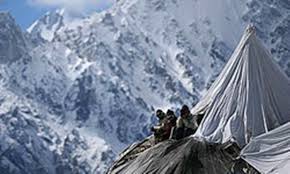 In April 1984, the gallant soldiers of the Indian Army, by establishing their writ over the Siachen Glacier, accomplished a feat of valour that has no parallels in the annals of the military history.

Colonel Narendra Kumar, a reputed mountaineer and Commandant, of the Indian Armys’s High Altitude Warfare School (HAWS) came across a map in the possession of a German rafter, in 1977, which showed a dotted line joining NJ 9842 to the Karakoram pass thus depicting that the India-Pakistan boundary line ended at NJ 9842. With great energy he launched a couple of expeditions from 1977 onwards and unearthed the Pakistani plan to control the territory.

Pakistan had already taken the first few steps by opening the area to mountaineering expeditions by civilians and was inching towards gaining military control.

It was under these circumstances that Operation Meghdoot was launched on 13 April 1984 to establish control over Indian territories in the icy heights of the Siachen Glacier. The plan was based on maps, photographs and videos provided by Colonel Kumar.

In an unimaginable feat of grit and bravery the Indian army gained control over the dominating heights on the main passes of the Saltoro ridge, Sia La and Bilafond La in a short period of time.

Pakistan denounced the Indian action as a violation of the Shimla agreement which barred the use of force to bring about a change in the line of control.

It is said that, after Pakistan lost the Quaid post, Benazir Bhutto taunted General Zia-ul-Haq that the Pakistan army should wear bangles.

Army posts in Siachen were subject to incessant Artillery firing for many years. Earlier the Indian Army was reticent in its riposte but later it adopted a Tit for Tat strategy that had a devastating effect on the Pakistani positions on the lower ridges. Pakistan finally saved face through the medium of the ceasefire in 2003 and has not violated the same, in the Siachen region, due to fear of Indian retaliation.

In other places along the line of control and international border, it is not as assiduous in honouring its commitment as is evident from the many ceasefire violations.

The Indian political leadership has shown a keen interest in demilitarising the ecologically sensitive region.  On June, 12, 2005, while on a visit to the glacier, then Indian Prime Minister Dr. Manmohan Singh openly expressed a desire to see the demilitarisation process through. “Now the time has come that we make efforts that this battlefield is converted into a peace mountain,” he said.

For doing so India has only put forth only one condition, authentication on a map of the Actual Ground Position Line (AGPL) along which troops are presently deployed. Pakistan is insisting on a withdrawal to the positions held in 1984, which is clearly not acceptable to India.

Pakistan wants India to vacate to the 1984 position because such an act would validate occupation of the Saltoro range by the Indian forces as a violation of the Shimla Agreement. Having achieved the first step, Pakistan will declare the region as a disputed territory. After this, a Jihadi intrusion to fructify expansionist designs is definitely not beyond the realms of reality, regardless of the assurances given.

Control over the area would constitute a major strategic achievement for Pakistan as it would breathe down the Indian Army’s positions in Ladakh while denying India the capability to monitor the sensitive Pakistan-China axis.

The matter has taken an even more critical turn for India now that Pakistan has illegally ceding to China the Indian territory of Shaksgam Valley, which is under its forcible occupation since Independence. Due to this illegal deed, China is in a position to bridge the Aksai Chin-Gilgit-Baltistan gap and dominate the Karakoram pass. India cannot allow such a strategic misadventure to take place. Thus, holding of the Siachen Glacier becomes even more important.

Both India and Pakistan have, over these years, lost more soldiers to the hostile weather in Siachen than to operations. The recent avalanche at the Indian Sonam Post in the glacier witnessed the tragic death of ten brave Indian soldiers and created the legend of Lance Naik Hanumanthappa of 19 Madras, who was retrieved from under the icefall after six days and brought to New Delhi for treatment but could not survive.

Earlier in 2012, Pakistan had lost as many as 130 troops in a massive avalanche at Gayari, its post nearest to the glacier. At that stage, instead of adopting a pragmatic approach, the then Pakistan Army Chief, General Kayani , reiterated the Pakistani position that it was India that started the dispute in 1984.

Natural calamities do not deter Pakistan from covetously eying Siachen, for which reason, India also has to bear the burden and pay the cost. Fortunately, over the years, India has gained expertise in manning the heights and casualties are down to a fraction. Incidents like the one that happened in Sonam post are not very frequent.

Prime Minister Narendra Modi celebrated the Diwali of 2014 with the soldiers at Siachen. By so doing, he reiterated the commitment of his government to uphold the position that the Indian Army has maintained with so much sacrifice.

On Siachen Day, as April 13 is celebrated by the army, the nation needs to remember and salute its brave sons who have upheld its sovereignty and integrity in such treacherous heights well named as the highest battlefield in the world.