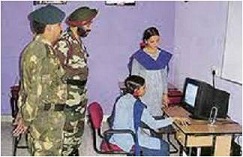 There are some very serious questions that need to be debated in view of the ugly turn that the matter of revocation of the Armed Forces Special Powers Act (afspa) in Jammu and Kashmir (J&K) has taken. There is no denying that issues of national security should come up for debate. Such debates may be carried out in the public domain by experts in the field who are in a position to provide an intellectual foundation to the government for the decision making process. However, such debates cannot be carried out by the functionaries of the government who are responsible for implementation of the national security policy. The deliberations are made public only when a national consensus on a grave issue of national security becomes imperative and this is done at the highest level.

In view of the foregoing, is the spat, which media reports suggest, Chief Minister Omar Abdullah has had with senior Army commanders posted in J&K over partial revocation of the afspa, commensurate with the norms that guide deliberation on defence and security aspects by government agencies? Is it proper to bring into the public domain, through an ill informed and ravenous media, sensitive issues that deal with national security? Is it proper to project the Army of a democratic nation as a power hungry force bent upon subjugating its own people under so-called draconian laws?

Omar Abdullah is the Chief Minister of a sensitive border State of the country and also chairman of a unified command of security forces involved in tackling terrorism and insurgency in his State. It is very strange that he deemed it fit to discuss his agenda points for a crucial meeting of the unified command with the media before chairing the said meeting. Once the meeting came to an end he found time to tweet in a social media site, twitter, “Who the hell is leaking the proceedings of Unified command meeting to the media.” For good measure he crisply added that he would not be commenting on the subject. My dear sir, you had made your point very clear before chairing the meeting, so why act coy later? Also, is it not part of your duties to find out as to who is leaking sensitive information about the proceeding which is, undoubtedly, a matter of grave concern? Is it prudent for you to declare the ineptness of your government to the whole world instead of taking serious steps to plug the loopholes?

What has been told to the media and what has been projected post the meeting is high on rhetoric and low on substance. The discussions between Omar and the Army commanders who form part of the unified command are not of much consequence insofar as the status of afspa is concerned. If Omar is serious about revoking the afspa, he has to first withdraw the Disturbed Area Act through a special session of the State Legislative Assembly followed by assent of the Governor of the State. In case he manages to do so, afspa would be automatically withdrawn. The existing political alignment in the State makes this prospect highly unlikely; Omar’s coalition partner, the Congress, will not play ball; the BJP, Panthers Party and other small groups will openly oppose the move, so how will the motion be passed? This apart, further action towards revocation of the Act will take place at the level of the central government where the matter will be deliberated by the Cabinet Committee of Security and discussed with major national parties etc.

At a conservative estimate, even with all stake holders being on board, the matter cannot be resolved in less than a year. One wonders as to how Omar is confidently suggesting that the necessary revocation will happen in “a few days time,” and how he is projecting the army, especially so, his colleagues in the unified command as the biggest road blocks in the revocation of the law.

The role of the army in this entire episode is not as villainous as it is being made out to be. This apart, Omar harbours a fallacious perception that the army has a special interest in his state. The army is a much revered national institution; it has vast responsibilities which extend across the country and involve multifarious activities. It has to respond to the buildup of military capabilities in the immediate neighbourhood and beyond, it has to address issues of nuclear security, modernization, defence acquisition, training, cooperation with foreign armies, readiness for different types of warfare from conventional to asymmetric to nuclear and a host of other issues. J&K forms a small, albeit important part of its overall responsibility.

The army receives its orders from the central government and it is the central government that has directed its commanders to become a part of the unified command. In concert with these directions, senior commanders of the Army brief Omar in his capacity of being the chairman of the established authority. During the recently held meeting the senior officers of the army simply gave to him their viewpoint on the basis of the situation on ground. This does not imply a “feet dug in approach” as is being projected. Whenever, the government at the centre directs the Army to modify its posture in J&K, it will do so without any debate or delay. In order to push his line of thought, Omar simply has to leave the army alone and convince his own people and the government of India.

In the meantime, it would be appropriate for the Chief Minister to show some respect to the soldiers who are making huge sacrifices in the cause of the nation in his home state. His ongoing spat with the Army is in bad taste.