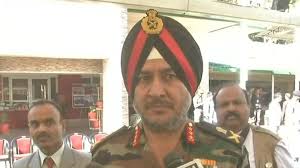 Army Commander, Northern Command, Lt. Gen. Ranbir Singh, has sent a clear message to Pakistan that it will be punished for any activities that are detrimental to security interests of India. “There have been sniping incidents across the Line of Control (LOC) and we have regularly protested with our Pakistani counterparts about the activity of sniping and wherever they have carried out ceasefire violation we have given them a befitting reply. The message is clear to all troops on the ground that should Pakistan not stop from carrying out any activity which is detrimental to our national interest along the LOC, they should be punished accordingly,” said Lt. Gen. Singh while speaking to the news agency, ANI, in the sidelines of a function held at Udhampur to felicitate teachers of Army Goodwill Schools. The Army Commander also stated that all attempts by Pakistan to infiltrate terrorist across the LOC have been successfully thwarted by the Indian troops.

Recently, there has been apprehension of a resurrection of terrorist activities in areas south of the Pir Panjal that has been free of militancy and terrorism for more than a decade now. These apprehensions resurfaced post the gruesome murder of Bharatiya Janata Party (BJP) leader, Anil Parihar and his brother in Kishtwar. While admitting to there being reports of terrorist activity in areas south of the Pir Panjal, the Army Commander said that they have been kept under check.

“There have been reports of activities of terrorists in the south of Pir Panjal but these are isolated incidents and we have been able to check and arrest any kind of movement in the region and people of the area know the dividends of peace in the area and have helped the army in keeping it this way. I want to thank people for this as well,” he said.

While speaking about the very significant aspect of the Kashmir Youth joining militancy due to indoctrination under Pakistani guidance the Army Commander hinted towards a perceptible decline in the recruitment and said that efforts are on to arrest it further.

The foregoing statements by Lt. Gen Ranbir Singh are, by far, the most significant since his taking over as Army Commander in June, 2018. They also give an indication of the Governments policy in the state post the institution of Governors rule.

While looking for a political solution based on democratic principles the Government has given a free hand to the security forces, especially the Indian Army, to deal with security issues as deemed appropriate. The troops along the international Border (IB) and the LOC have been particularly instructed to deal with any Pakistani intransigence and misadventures with an iron hand. The perceptible decrease in the number of successful infiltration attempts is a clear indication of the success of the policy and its application on ground.

The statement by the Army Commander is bound to boost the morale of the troops on ground and give a sense of confidence to the nation that things are well in control. It would also give a message to the Pakistan establishment and terror machinery that the Indian Army means business and the nefarious activities of the neighbouring country will elicit a strong response.

The security forces are working in close coordination with the civil administration to check the recruitment of local youth into the fold of terrorism. The policy initiative has been taken by Governor Satya Pal Malik by articulating a conviction that the youth are being indoctrinated and misled at the behest of inimical foreign forces. He is emphatic about the relevance of the younger generation in the scheme of things and the need to involve them in the affairs of the state. He has spoken of giving a boost to sports including the construction of a world class cricket stadium in Kashmir and creation of an IPL team for the state.

By suggesting that the Indian army will continue with its effort to wean away the youth from the path of terrorism the Army Commander has indicated the existence of a joint civil-military effort. The Army has, since long, been carrying out welfare activities under “Operation Sadbhavna” with the intention of ameliorating the suffering of the people and also winning their hearts and minds. These efforts have been mainly directed towards pushing the youth towards gainful activities like education, sports and career building. There is now a complete synergy of effort in this direction between the Army, other security forces and the civil administration, which is bound to accrue positive results.

The successful installation of the Srinagar Municipal Council (SMC) and the Municipal Committees of the various districts in the Kashmir Valley and also the Jammu Municipal Council with its ancillaries, despite all efforts of divisive and disruptive forces to stall the same, is a big morale booster in the political domain. It will give a boost to the upcoming Panchayat elections too. Once the institutions of grass roots democracy are established across the state and empowered to function effectively, the environment is bound to see a paradigm change for the better.

Lt. Gen. Ranbir Singh is convinced that the state is heading towards the right direction and is confident that things will improve at a very fast pace. This conviction and confidence is quite apparent in the statements that he has made. It is also clear that the Governor and the Army Commander are on the same page so far as policy is concerned. The Army and the administration are working in close coordination for the betterment of the state. Continued effort in this direction is bound to accrue path breaking results.