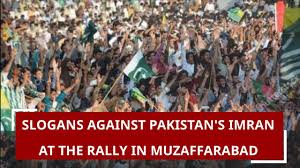 Pakistan’s Prime Minister, Imran Khan, has left no stone unturned in predicting dire consequences for Jammu and Kashmir due to reorganisation of the state into two Union Territories. He has been saying so despite the reorganisation being the result of a legitimate parliamentary procedure that has been accepted by the international community.

October 22 is marked as “Black Day” by the people of the POJK. On this day, in 1947, the perfidious and brutal Razakars (mercenaries) from Pakistan invaded the princely state of Jammu and Kashmir with full support of the Pakistan Army.

Earlier, a few dozen people used to come out to register a weak protest. What was different this year was the intensity. A number of political parties under an umbrella organisation named All Independent Parties Alliance (AIPA) came out to protest and the number of people on the street was in thousands.

The police force responded with unprecedented brutality. The largely peaceful rally was tear-gassed and Lathi (Baton) charged. The outcome of this unnecessary and brutal use of force by the police was the death of two innocent civilians, even as more than 80 sustained serious injuries.

One big reason behind this action by the security forces was the presence in the area of a large number of foreign diplomats and journalists whom the Pakistan Army had invited to the occupied territories to prove that there are no terror camps being operated from there. Obviously, the authorities did not want these foreign dignitaries to see the protests and hence the tearing need to scuttle the demonstrations with overpowering use of force.

Masood Khan, the titular and toothless President of the so-called “Azad Jammu and Kashmir,” was quick to come out in support of his masters by terming the vicious police action as a “preventive measure.” He also carried resorted to India bashing by saying that the police response was restrained as compared to that used by Indian forces on the other side of the line. It would be difficult for a stooge like him, who is selling his people to stay in power, to understand that as President it is his duty to protect his people from atrocity and not carry out comparisons with others. A high ranking military officer had the audacity to term the protestors as “Indian Agents,” little realising that by saying so he was acknowledging that the region has many who have a leaning towards India, thus negating the very concept of “Azaadi” on which this occupation stands.

As expected, the protests and the civilian casualties hardly found any mention in the Pakistan media. The region is behind an iron curtain from where no news leaks out. While in India the blocking of Internet facility is a temporary measure, in POJK, communication is totally restricted or under close scrutiny of the government intelligence agencies.

Not satisfied with treating innocent civilians like common criminals the Security Forces blatantly attacked journalists of the region. On 22, October, while a media briefing by Jammu Kashmir People’s National Alliance (JKPNA) was underway in the press club in Muzaffarabad, the police barged in, beat up the journalists merciless and broke their very expensive equipment. According to the News Agency, ANI, visuals from outside the press club showed police firing tear gas shells and lathi-charging the journalists as well as breaking their recording equipment. It is reported that many journalists were seriously injured. The objective, quite clearly, was to intimidate them into submission and thus ensure that no credible news goes out. The very next day, the journalists took to the streets to protest against a raid and openly raised slogans against the security forces.

There are many voicing their condemnation and displeasure at the state of affairs. While making it known that “Muzaffarabad POJK is burning,” Senge Sering, a US based activist from Gilgit-Baltistan has elucidated on social media the curfew like situation in Muzaffarabad with journalists being beaten up and women pouring out in the street calling the Pakistan Army hooligans and terrorists. He then goes on to ask, “Now, where are those 15,000 “British Kashmiris” who attacked Indian Embassy in London to show love for their homeland? They were carrying flags of POJK in their hands. Now that POJK is burning, they seem to have lost the address of Pakistan Embassy in London…..”

The Muttahida Qaumi Movement (MQM) has condemned the Pakistani security forces for “brutal manhandling” of a peaceful protest against oppression and atrocities by state agencies. It also appealed to the foreign diplomats to take notice of the barbarism and called upon human rights organisations to step forward for the sake of humanity.

Journalists of the international magazine New York Times, who were granted rare access to the region, found a “toughening Pakistani security response to a growing pro-independence movement there.”

The writing on the wall is clear – the people of POJK are fed up with the brutal subversion of their basic rights, and virtual colonisation by the federal Government of Pakistan and the Pakistan Army. They are fearlessly demanding freedom from the illegal occupation by Pakistan. They want to rid themselves of political stooges like Masood Khan who take office only after swearing allegiance to Pakistan and then function in subservience to the draconian Ministry of Kashmir Affairs of the Federal Government. The people want fresh elections with equal right to pro-freedom candidates. They are also demanding a separate constitutional assembly and unification with Gilgit-Baltistan.

The bubble of Pakistan’s much vaunted sympathies with the Kashmiri people has burst good and proper. There remains no doubt that the country has a single objective of milking the Kashmiris’ of their rich resources and throwing the people back into the medieval ages. The international community has also seen through Pakistan’s game plan and is now openly question its illegal and suppressive actions in POJK. India, in particular, needs to mobilise all means – political, diplomatic and otherwise, to ameliorate the poor condition of the people, of POJK, more so, since they are citizens of the country under foreign occupation.