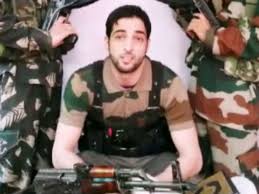 The killing of Burhan Wani, a so-called commander of the Hizbul Mujahedeen (HM), has led to a renewed debate on the terror machinery operating under foreign influence in the Kashmir Valley.

Experts are of the opinion that Burhan was more of a poster boy of the terror machinery than a well trained professional terrorist. He was a part of the propaganda campaign more than operational terrorist activity.

His main task was to revive the dwindling fortunes of the terrorist structure in the Kashmir Valley, especially of the HM. To that extent, he was being exploited by his organization. His leaders knew very well that, given his low level of training, it was simply a matter of time before he would be eliminated. The script played out exactly as it was designed by the terror masters; Burhan Wani was eliminated before the expected time frame.

“A good physique, fair complexion, well-kept beard, natty combat fatigues, AK 47 in hand make the picture of a high end model. This is what Burhan Wani was all about, a glorified poster boy of the terrorist propaganda machinery,” says Dr. Simrit Kahlon, a Chandigarh based expert on Kashmir affairs.

“Putting a photo in the social media is the last thing that a professional insurgent or a terrorist would do, the young boy was misled into taking action that led to his death,” added Dr. Kahlon

“The terror strategists sitting across the border want only to maintain the head count and get a terror incident or two from these poor boys before the curtain falls on them. It is nothing more than a numbers game,” says Jasbir Sarai, a social activist aligned with AAP and a keen watcher of the situation in Jammu and Kashmir.

“Recruitment has been catalysed by some innovative use of social media to lure local youth on to the path of violence. A terrorist, Burhan Wani, became the poster boy of this social media campaign,” said this columnist in an article – Curbing recruitment of Kashmiri youth as terrorists, published on 24 December 2015.

The warning bells had been ringing for Burhan for a long time but he chose to ignore the same.

Threatening the Jammu and Kashmir Police in a video, as Burhan did recently, put the last nail in his coffin. The Police force was not likely to take such threats lying down and thus was launched a special intelligence based effort to nail him.

The positive outcome came sooner than expected, thus highlighting the vulnerability of these youth who are indoctrinated into believing that they are invincible.

The efficiency of the police and security forces has been lauded by the government as expressed by Shri Jitendra Singh, a member of Parliament from Jammu and Kashmir and a Minister of State with the Prime Minister office.

There are reports of complete Bandh (lock-out) and Hartal (Strike) in the Kashmir Valley as called for by the separatists. The pilgrimage to the Shri Amarnath shrine is also being adversely affected.

It is very sad that the separatists would exploit the death of a terrorist to stall a religious activity like Amarnath Yatra (pilgrimage), that is so close to the hearts and minds of all Kashmiris and a valuable source of income for many Kashmiri Muslims. What role did the pilgrims play in the killing of Burhan Wani that they should be inconvenienced in this manner?

It goes to prove that the statements made by separatists and terrorists that they would not target the pilgrimage were fatuous and false. Deep down they never want the pilgrimage to succeed and lose no opportunity to scuttle the same.

There is, however, no need to be too concerned or worried; these are strategies to derive as much from the death of the terrorist as is possible. They will wither out in time.

The killing of Burhan valley should serve as a warning to the parents of young boys in Kashmir that they need to take responsibility to keep their sons away from the evil of foreign sponsored terrorism.

What is happening presently is a desperate attempt by the terrorists to stage a comeback. The people of Kashmir should realise this evil agenda and not allow it to fructify.

The government needs to launch a strong information campaign to counter this evil propaganda. The people, especially from a rural areas and a poor background, have to be informed and educated about the evil design and told the consequences of their boys following a wrong path.

Media is a very important means for dealing with foreign sponsored propaganda. It is important for media to highlight the dangerous design of the likes of Burhan Wani. It should expose the misinformation being spread and highlight the actual situation. To glorify criminals in the eyes of gullible youth does not serve the purpose of the nation.

The killing of Burhan Wani is a clear indication that security forces in Jammu and Kashmir are well in control of the situation. Both terrorism and infiltration are on the decline and the likes of Burhan cannot change the circumstances in their favour.

To say that Burhan and his associates represent a new resurgent face of terrorism in the Kashmir valley is totally off the mark. They are simply young boys being evilly exploited.  All those who want peace in the Kashmir valley – the government, the security forces, and most importantly, the people should now join hands to ensure that more Burhan Wani’s are not forced into cutting short their valuable lives in this sad and avoidable manner.