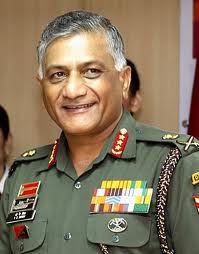 The service record of the Chief of the Indian Army, General VK Singh, has two different dates of birth (DOB) recorded in two different departments that are required to maintain such records. The Military Secretary (MS) Branch, which deals with the postings, promotions and career management of Army officers has recorded his DOB as 10 May 1950, whereas, the Adjutant General (AG) Branch which maintains a record of service of every officer to include qualifications, promotions, courses, heath, service details, leave details employment etc, has 10 May 1951 reflected as the DOB of the officer.

The root of this dichotomy can be traced back to the period when the General was aspiring to join the Army. His DOB was filled in the UPSC form as 10 May 1950 erroneously by his teacher, while all other documents that were prepared post his joining the IMA reflect his DOB as 10 May 1951. The MS Branch gets its inputs from the UPSC form filled by the aspiring candidate while the AG Branch gets its inputs from the record and documents which are submitted by a candidate on joining the Indian Military Academy (IMA) and which are forwarded to the said Branch when the candidate receives commission. In the case of General Singh, his first record of service called IAFZ – 2041 that was countersigned by his first commanding officer, his successive medical examination reports, his identity card, his checklist on completing twenty years of service, all these and many other documents have recorded 10 May 1951 as his DOB.

Logic dictates that the DOB as reflected in the school leaving and class 10 certificates be considered sacrosanct and valid as is universally accepted. The MS Branch should have made the necessary amendment in the officer’s records when it received the said certificates. Had this been done the matter would have been laid to rest at an early stage. The next question is – why did the officer not point out the dichotomy in the first few years of his career? Many officers have some problem or the other with their service records, sometime their family details are wrong, in other instances the name of their spouse or children is wrong, the medical records are wrong, their posting and course results are wrong or missing altogether etc. This happens mostly because officers traditionally accept the organisation as the custodian for their personal interests and submit to it their career management while in service. In many cases officers of the Indian Army pass their entire service without entering the portals of the South Block or the Army Headquarter where these records are maintained. Once discrepancies come to light there are well laid down procedures for regularisation which are followed to get the records in order. General Singh, it seems, has been recording his DOB as 10 May 1951 on all official service documents signed by him personally and sent to both MS and AG Branches. Obviously, he had no reason to believe that a dichotomy existed till such time that he received official communication on the matter from the MS Branch as late as May, 03, 2006, when he was already a Lt General.

The case of General Singh is yet another example of the tradition of custodian authority which also reflects the dedication to service on the part of Army officers and their lack of concern for what they term as “Babugiri”. In this instance also, once the discrepancy came to light the process for its regularisation was set in motion. In the highest traditions of service the officer agreed to comply with the decision taken by his superior authority. Recently, the details of the case were sought from the Army through a right to information query, the Army’s reply was sent to the legal cell of the Ministry of Defence who in turn referred the matter to the Union Law Ministry for advise, the Law Ministry has sent back an observation that 10 May 1951 should be taken as the correct DOB. It is on the merit of this advisory that the Defence Ministry will prepare its case for a final decision by the Defence Minister. In fact, since the school leaving and class 10 certificates are very clear and unambiguous the Defence Ministry should avoid procrastination and decide upon the matter at the earliest to ensure that budding controversies on the issue are nipped in the bud.

The next question is – what effect will it have on the succession hierarchy and functioning of the Army? The system being followed by the Army for selection to the appointment of Army Commander and above is based on seniority and age parameters. This in turn denotes that all officers who have attained the rank of Lt General and commanded a corps are considered to be fit to command an army and also attain the appointment of Chief of Army Staff if seniority and age are on their side. The issue of succession and appointment of the next Chief is still a long way off and there is no point in discussing, contemplating or addressing the same at this stage. The nation can rest assured that whosoever succeeds General VK Singh as Chief of the Indian Army will be equally competent and accomplished for the job. As regards the functioning of the Army, a silver lining in the whole issue will be that should General Singh get some more time in office he will be able to reinforce his objectives of strengthening the internal health of the Army. Continuity will pay handsome dividends.

This matter is in capable hands and will be resolved in a just and equitable manner, there is no point in targeting an esteemed high ranking officer who has already committed himself to adhering to the decision of his superior authority, nothing can be gained by trying to find a controversy where none exists.