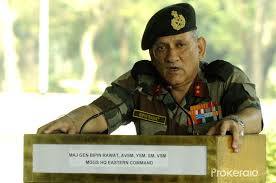 A few years ago, when the UPA government was in power the BJP, in opposition, would often lament that the Congress lacked “strategic culture.”  This was said in context with the sorry state of affairs in the Armed Forces for which the blame was put on the ineffectual Defence Minister, AK Antony.

The hasty, opaque, and insensitive manner in which the present NDA government has carried out the selection of the new Chief of Army Staff (COAS) is a clear indicator that this government also does not have much of a strategic culture or forethought to write home about.

Volumes have been written on the subject by a wide spectrum of intelligentsia, defence experts and analysts. Even a cursory examination of what has been written would show that the government is getting egg on its face for the decision that it has taken.

A time honoured convention and precedent has been broken for no worthwhile purpose whatsoever.

Anyway, what is done is done and now Gen. Bipin Rawat is the new Army Chief.  His is not going to be an enviable task by any means considering the rampant politicisation that has gone into his appointment with or without his choosing. It would be best to see how the damage done to the country and Army can be contained.

The first big challenge is – how to deal with a resurgent Pakistan?

The Pakistan Army and its militant “Strategic Assets’ would be gleefully savouring the success that they have achieved in converting the mighty Indian Army from a multi pronged and potent fighting force to a paramilitary entity restricted to performing counter terrorism operations.

This weakness in the thought process of the Indian political leadership will definitely be exploited to the hilt by the Pakistan Army and its militant stooges.

India can expect a spike in terrorist activity all across and especially in Kashmir and every success achieved will be followed by hate filled public speeches where the likes of Hafiz Saeed will say, “Look, the so-called specialist that these Indians put at the helm of their pathetic army has been made to eat dust by our brave Mujahedeen.”

In other words, the elevation of Gen. Bipin Rawat to the post of Army Chief on the premise that he will be able to contain terrorism in Kashmir better has opened a can of worms for India. The nation now has to gear up for a very nasty round of violence.

A corollary to the first challenge is – how to deal with Kashmir?

It should be very clear that the Army has a limited role to play in Kashmir. The terror threat has been contained; there will be terror strikes and there will be casualties of security forces, however, so long as the threshold of terror manpower and infrastructure does not show a perceptible increase there is no need to panic.

The situation is at a level where political intervention in the trouble torn state is feasible and this is the direction in which the matter should proceed. The army, due to a misplaced exuberance of the new Army Chief in view of a created persona of him being a “counter-insurgency specialist,” should not give space to the political establishment to put its failure to proceed in the political domain on its shoulders.

Gen. Rawat has made a grave error by speaking only about Kashmir in his interview that has been posted in Hindustan Times. He should have spoken on a broader spectrum rather than restricting himself thus and reinforcing the perception that his job will be Kashmir and Kashmir alone. One sincerely hopes that he will not make similar mistakes in times to come.

Simply put, the Army Chief he has a limited role to play in Kashmir; this pertains to keeping a close watch on the political and security environment and interfere only when is becomes absolutely necessary. He has an ample number experienced officers and brave soldiers on ground to deal with routine security challenges. Flying down to terror hit locations, as his predecessor used to, serves no purpose whatsoever.

The next challenge is – how will the government wipe off the egg that is splattered on its face?

It is fervently hoped that the government, in its desperation to contain the situation, will not create two more four star ranking posts to “adjust” the superseded Army Commanders. Such an act would demean the already shaky institution of the Service Chiefs who, in any case, do not seem to be having anything better to do than to wear their fancy uniforms and sit in the third row of public functions.

The only viable post that can be created is that of a Permanent Chairman of the Chief of Staff Committee or a Chief of Defence Staff for which the two Army Commanders could be short listed for selection, anything beyond that would amount to adding fuel to the fire.

Another big challenge is – How will the new army chief deal with the fissures that have been created within the army due to the political nature of his appointment?

For Gen. Rawat to depend only on the inherent resilience and discipline of the army would be simplistic. He has to realise that he will be up for scrutiny much more than any other chief in recent history both within and outside the military establishment.

One good policy that he can be advised to follow would be to become more equitable and transparent. A few more Gorkha officers in top appointments at Army Headquarters, a few more tweaks in the selection policies to suit his regimental officers and he will lose respect across the board, and with it, the moral authority to command.

It is hoped that the government, having ensured that the best people are at the helm will now let them function. It is time to involve them in the decision making process and, at least, attempt to raise the level of “strategic culture” within the hallowed corridors of North and South Block.

Finally, it is also hoped that the nation will, sometimes, get see a smiling chief beyond the formidable Gorkha Hat. Many look with nostalgia at the ease with which Field Marshal Sam Manekshaw could interact with the redoubtable Prime Minister Indira Gandhi. His photograph in conversation with the Prime Minister in her office says it all. What better person for the new chief to emulate than Sam Bahadur.

(Jaibans Singh is a reputed defence analyst, columnist and commentator)