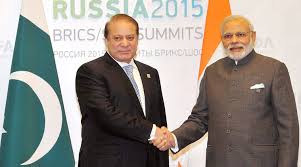 Prime Minister Narendra Modi has literally put his reputation at stake in pursuit of achieving peace with Pakistan. He is motivated by a firm belief that lasting peace will open the doors of unprecedented development for the two nations.

His meeting with Nawaz Sharif at Ufa, Russia, on the sidelines of the SCO Summit, was yet another attempt to break the impasse. The meeting generated considerable discourse in both countries as well as in international fora.

It can be safely surmised that both heads of government were absolutely aware of the flak that they would receive for the initiative. It is to their credit that they went ahead and came out with a bold joint statement.

What surprised most was the spontaneous and vicious reaction from some entities in Pakistan. Those aligned against the interest of the two countries took full advantage of the media to, yet again, attempt derailment of the process of normalisation of relations between the two countries.

Pervez Musharraf, the former President of Pakistan, and now principal pawn of Pakistan Army Chief, General Raheel Sharif, led the charge. He accused the Prime Minister of his country of being subservient to his Indian counterpart, and also for overlooking Kashmir during the talks.

Gen. (Retired) Musharraf’s crude rhetoric was picked up by the opposition, the Pakistan electronic media and Pakistani analysts like a fish takes to water. All aspects of the meeting – the walk, the talk and the content of the joint statement, were torn to shreds with the roughest of language and shrill tones.

Several Hurriyat leaders have declined invitations to an Eid Milan function at the Pakistan High Commission in New Delhi. This is yet another way to pressurise Prime Minister Sharif to move away from his conciliatory position towards India.

The complete silence maintained by Prime Minister Sharif through this media circus stands witness to his weak position in comparison to the army and militant organisations in the country.

Prime Minister Modi would have realised that, notwithstanding his earnestness and good intentions, the person with whom he is trying to engage in Pakistan is not in a position to deliver upon promises given.

Sharif simply does not have the authority to change the India-Pakistan narrative.

The person to talk with in Pakistan is the army chief, General Raheel Sharif. He alone has some capability to deliver on promises. Sadly, no Pakistan army chief would even listen to any conciliatory arguments that India puts forth, least of all, the present incumbent.

It would, therefore, be in India’s interest to keep subtle lines of communication open and hope that, with time, a popular sentiment would build up which would pressurise the leadership in Pakistan to change its course and policies. Over-hyped high level meetings followed by joint statements should be avoided.

Pakistan initiated violence in the state of Jammu and Kashmir has witnessed a sharp spike in the aftermath of the meeting between the two Prime Ministers. There has been incessant and unprovoked firing by Pakistan troops along the International Border and the Line of Control. Pakistan sponsored terrorists have attacked innocent civilians in Kashmir despite the ongoing holy and fasting month of Ramadan.

The message is loud and clear – the Prime Minister of Pakistan may say whatever he wants, those engaged in spreading terrorism and disruption in n Jammu and Kashmir are not likely to tone down their rhetoric or actions anytime in the foreseeable future.

The people, the government and the security forces in the state, therefore, need to gear up for more cease fire violations, infiltration bids, terrorist initiated violence in the hinterland and separatist instigated disruption in the Kashmir Valley.

The best option, under the circumstances, would be to firm up the security in a manner that makes it too expensive for the neighbouring country to maintain its terror apparatus in the state. For this, the security forces need to be been given all assistance and moral support. The level of vigilance simply cannot be scaled down.

While the soldiers do their job, the central and the state governments have to come up with some innovative, out of the box ideas to change the political, social and economic narrative. The idea should be to challenge Pakistan’s evil agenda with a strong domestic constituency. The government should put in its best effort to meet the aspirations of the people ad usher the region towards the path of peace, prosperity and development as promised.

It is to the credit of the Indian side that it refused to get drawn into the trap of the malevolent forces in Pakistan post the meeting of the Prime Ministers. The joint statement was defended in the media on its merits.  The remarks being made by Prime Minister Sharif’s Adviser on Foreign Affairs and National Security, Sartaj Aziz, are being said to be b addressed to the domestic constituency in Pakistan. The sabre rattling is thus being brushed off in a sophisticated manner to send out a message that India will not relent from the five-point roadmap drawn up by the two heads of state. This is about as far as India can go in pursuit of peace.

All eyes are now on the meeting between India’s National Security Advisor Ajit Doval, and his Pakistani counterpart, Sartaj Aziz, to be held in New Delhi. The meeting  is being held to discuss issues connected with terrorism as specified in the joint statement. Considering the rigid stand that Aziz has already adopted, it seems unlikely that anything fruitful will emerge from the meeting.

While maintaining an air of positivity, India should not be overly optimistic about a constructive response from Pakistan. Prime Minsiter Modi may, with a heavy heart, be compelled move away from top level engagement and support progress from behind the scene. This could well turn out to be the best course of action.