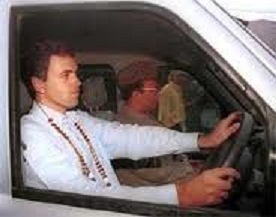 There seems to be a conscious effort on to set the clock back in Jammu and Kashmir (J&K) by building political hyperbole designed to cause acrimony and divisiveness rather than assuaging emotions. One relatively uneventful summer down the line has caused a collective amnesia amongst the political leadership about the terrible suffering of their people over two decades. Politicians in the Valley seem to be in a tearing hurry to earn brownie points by playing to the gallery, regardless of the consequences of their reckless words and actions.

The biggest scapegoat in this mudslinging is the security forces. Instead of appreciating the sacrifices made by these selfless soldiers over two decades to contain, what is historically the biggest terrorist assault by a foreign power on innocent civilians, they are being hounded by self serving politicians.

The latest in line to follow this time tested policy is none other than the Chief Minister of the State, Omar Abdullah. With his back against the wall due to falling political ratings and an unstable personal life, he decided to turn off the heat by raising the issue of withdrawal of the Armed Forces Special Powers Act (AFSPA) in some areas of the State. This is nothing new, he has been following this route to divert attention for quite some time now; the only difference is that this time round some members of his own party decided to take him seriously.

His uncle, Mustafa Kamal, a General Secretary of the National Conference party and younger brother of the party President, Farooq Abdullah, thought it prudent to exploit a recent spate of terrorist attacks in the Kashmir valley, to brow beat the Army into toeing his beleaguered nephews line. In an astounding statement he squarely blamed the Army for the aforementioned acts of terrorism, “Who else can do such any act. Because they (Indian Army) only opposed the state government’s move to lift the Armed forces law from some areas in the state,” he said.

Not a word of condemnation against terrorists or terrorism, not a word of sympathy for the security persons who have sustained injuries, not a word about the government’s resolve to eradicate terrorism from the region. All that the National Conference could come up with was a petulant and immoral statement by their most eminent General Secretary. In another display of spineless immorality, on coming under fire, the leader quickly retracted his statement by using the famous by line of having been “misquoted”. He should have, at least, displayed the guts to stand by his opinion and justify the same.

The Army has, very rightly, brushed aside these insinuations as not worthy of comment. However, for those who have the good of the State in mind such words and actions portend disaster and a direct threat to the environment of normalcy that the State is slowly moving towards; hence the need to articulate the ramifications of this incident in detail.

There is no end to the number of allegations that can be made. It can also be said that the National Conference orchestrated these attacks in order to discredit the Army and pressurise the central government into toeing its line. The fact of the matter is that such irresponsible utterances can assist nobody more than the terrorists who are desperately trying to regain lost ground; divisions within the government is just what they want to raise their ugly heads all over again. This chink in the armour of the government has been registered by the separatist elements who have already initiated the process to exploit the same. There is talk of Bandhs and Hartals to press home a demand not only for revocation of AFSPA but also removal of security forces from the Valley.

There remains no doubt that Omar and his party have created a complete mess in handling of the most sensitive aspect of internal security in J&K. One wonders as to how Omar Abdullah the, by now, compromised Chairman of the Unified Command which is responsible for overall internal security will generate the moral authority to ask the security forces to bail him out of the mess which he has created? Since Omar does not have faith in the very security forces that have been placed under his control, is it not proper for him to resign from the post of Chairman of the Unified Command and let somebody else hold the mantle? Then he would be free to run form pillar to post with his demand for revocation/removal of AFSPA for whatever it is worth. He cannot sit in a position of authority and yet be critical of his own government and his own security forces.

Terrorist violence is neither new to the Valley nor is it unexpected, it is common knowledge that terrorists utilise their limited capability to strike only on important occasions so as to gain maximum advantage. A terrorist attack on the eve of Diwali has both religious and political merits hence it should be expected. It was in this context that the both the State government and the National Conference should have responded to the terrorist attacks. Having failed to do so, it does not come as a surprise that their ally in governance, the Congress, has been quick to disassociate itself from the suicidal path that Omar and his party have embarked upon. The Congress has clearly stated that it was not consulted by Omar before mooting the demand for partial removal of AFSPA. Unfortunately, the damage has been done and the repercussion will be there for all to see. One can only hope that good sense will prevail in the future.