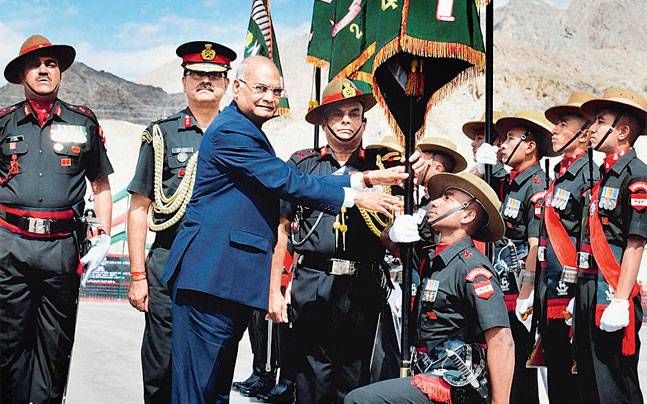 “Naam, Namak Aur Nishan,” is an ethos that calls upon Indian soldiers to strive for the good name of their country, the salt that they have partaken and the glory of the national flag/regimental standard, to the extent of making the supreme sacrifice of their lives when required. The Indian Armed Forces are particularly proud of is their All India All Class (AIAC) character, a complete integration of all communities and faiths into a single mould – that of the Indian soldier.

Religion, caste, community etc. never figures in the scheme of things of an Indian soldier. The moment he joins service as a trainee recruit, he becomes a part of the noble fraternity and brotherhood of arms, leaving all else behind.

It is to the credit of the founding fathers of the Constitution of India that they remained sensitive to the need of recruiting only the fittest and the best in the Armed Forces of the country and precluded the services from “Reservation.” This provision has been assiduously upheld by successive governments, the judiciary and the senior military hierarchy as intrinsic to the good performance of the Armed Forces.

In order to live up to the faith reposed on the Armed Forces by the country, only the fittest and the best are selected for All Ranks from Sepoy (Indian Army soldier) to officer.  The Army has a very impartial and effective recruitment policy, which has seen minimum/negligible court interventions in all recruitments including officers. For recruitment in the Army, fulfillment of criteria like requisite education qualification, age bracket, health and physical fitness parameters etc. and then making it to the merit list is the only factor considered in an applicant.

Such is the fairness of the system that instances abound where wards of junior ranks (Sepoys and Junior Commissioned Officers) get selected in the officer cadre while wards of officers face rejection for not fulfilling criteria.

The recruitment process for Sepoys ensures that pro rata, all states, castes and denominations in our country are given equal share in the intake process by considering proportions  of Recruitable Male Population (RMP) of each State. A state like Uttar Pradesh having a larger RMP gets more vacancies than a state like Punjab having a lesser RMP. Thus, a contention that equal opportunity is not given is  grossly incorrect.

Despite evolving such a fair system the Army, at times, is said to have a having a casteist and racist template as a continuing legacy of the British times. The argument is based on the existence of some Fixed Class composition units in the fighting arms. The army has regiments like the Gorkha Regiment, Jat Regiment, Sikh Regiment etc. which have soldiers coming from a specific castes. This, however, does not impact the All India All Class (AIAC) character since the said classes do not get any extra benefits in the RMP index. Also, the soldiers of these Regiments come from different parts of the country ­- a Jat Regiment will have intake from Haryana, Uttar Pradesh, Rajasthan etc and a Sikh Regiment will have intake from Punjab, J&K, Haryana  and so on.  The process is organised by first filling vacancies of the Fixed Class composition units from the recruitment influx.

There are many good reasons for carrying on with this system. The first and foremost is that it has stood the test of time, not only in India, but in the best Armies across the world. Modern armies of other countries like the United Kingdom, Canada, Pakistan and many more also subscribe to the system. The UK has Irish Guards, Welsh Guards, Scottish Regiment etc. Pakistan has Punjab Regiment, Baluch Regiments etc.

The “Fixed Class” composition Regiments have noble and historic traditions. They have  proved themselves in innumerable wars and battles and are great military assets. They have a history and a legacy that needs to be nurtured to maintain the cutting edge. Fixed Composition also facilitates parameters like ease of administration, kinship, religious/regional camaraderie, language, customs, eating habits and most importantly time-tested battle winning capability.

The Sikh Light Infantry (SIKH LI)  that comprises of Mazhabi (Dalit) Sikhs is often quoted to reinforce the casteist angle of arguments. It is insinuated that the Regiment has been created to accommodate Dalit Sikhs and thus separate them from the Jat Sikhs who serve the Sikh Regiment.

The reality is that the SIKH LI will not wish to lose its character under any circumstances having created an enviable niche for itself by virtue of its valour and courage. SIKH LI has given three Chiefs and innumerable Generals to the Indian Army, including the incumbent Chief, General MM Naravane. Please watch the pride with which the incumbent Army Chief begins his addresses with “Sat Sri Akal” the traditional greetings of the Sikhs. There is no embarrassment evident in him or other officer of the regiment for having served with “low caste” Dalit soldiers. They are, in fact, so very proud of their Regiment and their men.

Glorifying the rich history and tradition of old Indian regiments and units actually manifests as force multipliers and meeting their intake requirement within the fold of the basic AIAC composition is a true example of the artful Human Resource management of the Armed Forces.

The units that were raised after independence are based on the AIAC model. Thus, in the Indian Army of today, there are a large number of Mixed/All Class composition Regiments in fighting arms like Armour, Mechanised Infantry, GUARDS, Artillery, Engineers and  all Services too. Even Infantry units like Mahar, Grenadiers etc are of Mixed/All class composition.

Sabyasachi Dasgupta, in his article, has spoken of  a Public Interest Litigation filed against the Fixed Class composition of the Presidents Body Guard (PBG). It is a matter of record, as accepted by the writer too, that the Judiciary does not find any reason to interfere with the internal affairs of the Armed Forces . The writer has said in the article, “The Supreme Court quashed the petition, saying that it did not want to “rock the army’s boat.” Surely, with a direction of this nature coming from the highest Court in the country there should be no reason to broach up the subject again and again. In any case the PBG is a ceremonial Regiment dedicated to the office of President of India. Any changes in the composition of the unit can be affected only at the pleasure of the President.

Monumental successes achieved in Post-independence wars is the result of the forces being given a free hand to run their affairs in the manner they deem fit. It is only befitting that the organisation of the selected manpower be left to the Army. To comment on the basis of peripheral knowledge with consideration of one sided aspects is not correct. It is surprising that after seven decades of independence when there should be talk of removing reservation altogether the opposite is being propagated for the Army.

(Jaibans Singh is a military analyst, writer and commentator)