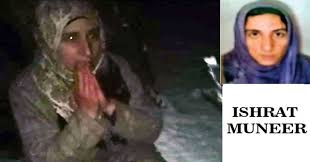 “Fear” is the primary instrument for the sustenance of terror! Terrorists depend upon this element to further their multifarious unholy activities, be it wanton killing of innocents, recruitment into their fold or seeking administrative support. Quite naturally, “informers” are considered to be the worst possible traitors by the terrorists and for them is reserved the most brutal and sadistic death imaginable. Such killing of informers is given wide publicity in order to instil the required degree of fear among the people and ensure that none dares to go against the terrorists. In the modern digital era, publicity is garnered by shooting a video of the murder and them uploading the same on a social media platform. The publicity is instant and of the type that the terrorists revel upon.

Isharat Muneer is the latest victim of this brutal fear based strategy of terrorists in Kashmir. She was a 25 year old student from Kashmir whose only desire was to lead a normal life. To this end she was pursuing her studies in Sociology from Indira Gandhi National Open University (IGNOU) and simultaneously taking computer classes. On 25, January, she was abducted while on her way back home from her computer classes. She was forced to admit to being an informer and then as many as eight bullets were pumped into her body. A video of the gruesome act was posted on social media platforms where it has gone viral. The world is aghast and horrified by this act of utmost brutality.

Isharat was the maternal cousin of a much wanted terrorist, Zeenat-ul-Islam, who was gunned down by security forces on 13, January. It was purported that Isharat had informed the security forces about the whereabouts of Zeenat and her killing was to avenge this act of hers.

Killing innocents on the charge of being “informers” is something that the immoral terrorists have been doing since long. The “informer” card is being used to settle personal scores and family disputes. Such acts accrue a threefold benefit of killing a personal enemy, gaining notoriety as a powerful terrorist and instilling fear in the minds of the people from whom support for sustenance has the be derived. Something similar has led to the killing of Isharat.

In the case of Isharat, the charge of being an informer has not been substantiated since no motive can be attributed to her taking such a step against her own relative. More in the realm of reality is a possible lust connection. Some terrorist must be coveting her but had been snubbed causing a severe bruise to his ego. He obviously could not do anything because of her connection with Zeenat-ul-Islam; on the death of the latter the terrorist probably carried out the abduction and avenged his humiliation by killing her in cold blood. In order to give credence to his act, he extracted a confession of being an informer from her. It could also be a case of getting even with the slain Zeenat-ul-Islam due to inter-Tanzeem (Terrorist group) rivalry.

The terrorists who killed Isharat Muneer now wish to justify their action as one finding favour in Sharia. Where in Sharia is it written that a young defenceless woman be killed in cold blood?  The reality is that terrorists are getting scared of losing their writ and are taking such desperate steps to boost their sagging confidence and self esteem. Beyond the personal vendetta, the killing of innocent Isharat was also their unholy way of sending a message of reprisals against such people who refuse to render unmitigated support.

In fact, an increase in brutality against innocent civilians by terrorists has been witnessed in recent times. A few months earlier on November, 16, the bullet ridden body of 17 year old Nadeem Manzoor was recovered in Shopian District. The video of his brutal murder was quite similar to that of Isharat Muneer. He was seen pleading for mercy even while his abductors accused him of being an informer and then killed him. The very next day the throat of another 19 year old boy, Huzaif Ashraf Kuttay was slit and a video made. He too was accused of being an informer.

Sadistic acts to placate their inflated egos are not new to terrorists in Kashmir. It is well known that they seek refuge in civilian houses where they expect to be fed and sexually satiated by the women of the house. There is enough evidence of fissures and enmity between the various Tanzeems that leads to mindless violence. Those who profess to be performing Jihad for the so-called liberation of the Kashmiri people have, since long, become their biggest tormentors. It is no wonder then that the Kashmiri people are assisting security forces in eliminating the terrorists.

By the murder of Isharat Muneer the terrorists stand exposed as the merciless, inhumane, brutal sadistic, egoistic, criminals that they are. The security forces are bound to hunt down her murderers and avenge her death in a very short period of time. The need of the hour, however, is that Kashmiri parents and sisters expose to the young boys of their families the ugly face of the terrorists as has been seen in this sad and horrific case. These boys should not get swayed by wild propaganda of a “Jihad for liberation of Kashmir” and put themselves as well as their families in jeopardy. They should not forsake their career and life for the sake of pursuing a path of downright criminality where death and ignominy is a certainty.

It s also time for the security forces to speed up the process of eliminating the terrorists operating in Kashmir since the people cannot feel safe till the last one of them is not killed. Enemies of the state and the people will continue to shout against the security forces and pressurise them into reducing the operations, but they must stay steadfast and continue with the noble task that they have been called upon to perform.

(Jaibans Singh is a reputed journalist, author and commentator)