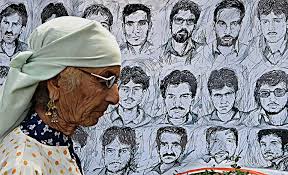 Mother’s Day will be celebrated across the country on May, 13 this year. On this day, mothers are honoured by their families, especially the children, for their contribution to the family and society at large. The influence of a mother cannot be over emphasised; it is universally accepted that a family can be only as good as the mother of the house; it is she who instills the right values in the children and steers them on to the right direction.

The mothers of Kashmir have, through the ages, acquitted the aforementioned responsibility with exemplary resilience and courage. They have made supreme sacrifices during long periods of turmoil and faced insurmountable challenges to keep their families intact, safe and morally righteous.

The cult of terrorism, disruption and divisiveness that Kashmir is facing may well be the most formidable challenge so far. It is all the more menacing due to the involvement of a determined foreign enemy who is ready to go to any immoral and evil extent to gain control of the region. He has no interest in the people; his interest is only in the land, its abundant natural resources, its beauty, its strategic significance and most of all its water resources.

The enemy has found in the youth of the region a lucrative target in furthering his evil agenda. He is taking advantage of the vulnerability of young minds to further his objective.

This is the time for the mothers of Kashmir to reflect on the huge responsibility that rests on their shoulders. It is only they who can turn round such youth who are being indoctrinated into following the evil and self destructive path of terrorism.

It is only the mothers who can check the teenagers indulging in the unlawful activity of stone pelting which is breaking up the fabric of the society and giving a bad name to a region that has always been known for its deeply embedded, enlightened and peace loving civilisation.

It cannot be denied that living under continuous shadow of the gun, a disrupted education and an uncertain future greatly impacts young minds. It instills in them a sense of insecurity, victimhood and gives rise to negative emotions of frustration and anger.

They require consistent and continuous nurturing with love and care to beat the demons that they face, and more so, that they are made to face with through a sustained psychological invasion of their young and fragile minds.

It is only the mothers who can isolate their children from such wicked designs.

Kashmir’s misfortune lies in the fact that this psychological brainstorming is being carried out at the behest a foreign power by its paid stooges present in the Kashmir society itself. This internal dimension at the very doorstep of the families adds manifold to the danger. It makes the job of the mothers even more difficult and all the more important.

In every society the energy of young blood has to be diverted towards gainful purposes, in Kashmir, this is literally an existential need. The mothers can ensure that the young boys stay involved in gainful pursuits of studies, games and cultural activities despite the distractions. They can tell stories of the greatness of Kashmir to their children and motivate them towards working to resurrect the same. They can ensure that their wards do not respond to the incessant calls for strikes and lock outs. They can order their boys to stay away from unlawful and self negating activities like stone pelting which are the harbingers of their thrust towards a life filled with violence and hatred. What starts with stone pelting culminates with an entry into terrorism and ultimate death.

The scope of the challenge is so huge that mothers cannot be expected to face it alone. They require the support of the Kashmiri civil society as a whole. It is here that political leaders, elders, intellectuals, religious teachers’ et al have a big role to play in support of the mothers.

While mothers exercise the most essential element of soft power, it is the elders who will have to articulate the negative impact of the foreign sponsored invasion and impress the same upon the younger generation. It is the duty of those in authority, whose word is listened to and respected, to expose the evil designs of foreign powers and convince the youngsters against being misled by propaganda.

Unfortunately, the political leadership of the state is immersed in fructifying self serving agendas depending upon their political postures. Separatists do not bat an eyelid while espousing venom that emotionally disrupts young minds. While nothing better can be expected of them, the sad part is the manner in which the leaders of so-called mainstream parties of Kashmir remain at each other throats and neglect the larger objective of moving their people towards peace and prosperity.

At the present time, rather than playing the “politics of ceasefire” as is being done by the ruling People’s Democratic Party (PDP), it would be better to launch a “Mass Contact Movement” on Mother’s Day and carry it through the holy month of Ramzan. In this period the ruling dispensation can go from house to house with a message of peace while actively involving the mothers in the scheme. It can also upon the opposition top become a part of the movement and thus expand the canvas, while displaying its statesmanship and magnanimity.

If the youth are not stopped from pursuing the path of terrorism and the threat is not eradicated from its roots, the unique civilisation that is Kashmir will face the danger of extinction.

Mothers are the pillars of strength in all societies, if they take a lead others have no option but to follow. History is replete with instances of women having changed to course of society and the same can happen in Kashmir too. It is hoped that on Mother Day, the great women of the great land of Kashmir will pledge to save their children from the curse of mindless violence and will, once again, emerge victorious.

(Jaibans Singh is a reputed columnist and analyst)