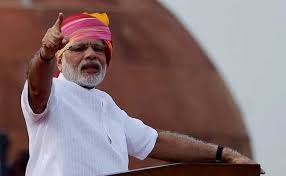 India has finally taken a firm and righteous stand with regard to the spiralling state and radical Islam sponsored violence in Pakistan. The posture now adopted by the Government of India with regard to the atrocities and human rights violations being committed in Baluchistan and Pakistan Occupied Jammu and Kashmir (POJK) should have come by a long time back. However, it is better to be late than never.

Most appreciable is the absolute openness and transperancy with which the posture has been adopted. Prime Minister Narendra Modi has, in his imitable style, chosen to catch the bull by the horns. While articulating the issue he has not hidden his feelings and his intentions behind a cloak of diplomacy.

The prime minister made a reference to the critical issue first during his concluding remarks in the All Party Meet (APM) held on 12 August to address the unrest in Jammu and Kashmir. While extending support to the beleaguered people of Baluchistan, Gilgit-Baltistan and Pakistan Occupied Kashmir he said, “Pakistan forgets that it bombs its own citizens using fighter planes. The time has come when Pakistan shall have to answer to the world for the atrocities committed by it against people in Baluchistan and PoK.”

The prime minster went on to reiterate the stand of his government from no less a place than the ramparts of Red Fort.

During his Independence Day speech he said, “Terrorism is being glorified. When innocent people are killed in terrorist attacks, there are celebrations. What kind of life is this which is inspired by terrorism? How governments are formed through inspiration of terrorism. The world will understand this difference clearly. That is enough for me.”

He went on to make it very clear that his initiative to support the people of Pakistan who are victims of terrorism and sectarianism has, within a few days, elicited gratitude from them.

“In the last few days, people of Baluchistan, Gilgit-Baltistan, Pakistan Occupied Kashmir have thanked me, have expressed gratitude, and expressed good wishes for me,” he said in his speech.

A more direct message to a maverick neighbouring country and the world cannot be given by any prime minister.

By referring to the issue in his Independence Day speech, the prime minister made it very clear that his statement made during the APM was not a one off rhetoric but something that he is determined to carry to its logical conclusion.

The direction that the prime minister has given to the narrative of violence in the sub-continent has caused ripples across the world and considerably rattled Pakistan.

The posture is not different from the policy that India has followed on the subject of subjugation of the non-Sunni Muslim population in Pakistan. Successive governments, intelligentsia, media and political parties have held a similar view. The difference is that now the view has been voiced clearly by none less than the Prime Minister of India and it is no longer cloaked in diplomatic ambiguity.

There is some articulation of this being a reaction to the belligerent propaganda that Pakistan has launched to keep the pot of unrest boiling in the Kashmir Valley. Such a thought is both frivolous and fatuous.

The prime minister is demonstrating his concern for the fast deteriorating internal security situation in Pakistan that is posing a threat to the stability of the entire sub-continent. If things continue as they are there will be a huge, unacceptable price to pay in terms of human misery and economic regression. The sub-content will go back in time by many decades if not centuries.

India has, for far too long, dithered in its approach toward supporting its citizens in the territories of Jammu and Kashmir under forcible occupation of Pakistan. This is probably because previous governments harboured a misnomer that Pakistan would relent from creating trouble in Kashmir if a soft approach towards the occupied territories is adopted.

Pakistan on its part did no such thing. Buoyed by India’s silence it continued to bleed and colonise POJK while also using the area to infiltrate terrorists into the Kashmir Valley. Now that diplomatic battle lines drawn at least the people of POJK will cease feeling like orphans.

Now India needs to walk the talk and that too very fast. As a start, India must strongly contest the formation of a sham government in POK after yet another rigged election for the toothless Legislative Assembly.

Whenever such sham elections are held, the party which is ruling in Islamabad invariably emerges as the winner; the result of the recent elections was no different – Nawaz Sharif’s PML- N won a thumping 31 out of the 41 seats for which direct elections were held.

Immediately after the results were announced the people took to the streets in vast numbers shouting slogans against Nawaz Sharif, the Government of Pakistan and the infamous Inter Services Intelligence (ISI). Violence was reported in many places even as the Pakistan Army moved swiftly and ruthlessly to subdue the agitation.

At the end nothing came of the valiant effort of the people and the majority will was, once again, stifled by the state authority. Information did not come out since the region was closed to media scrutiny as is the routine.

Prime Minister Narendra Modi has, very rightly, taken on the mantle of not only exposing Pakistan’s duplicity in Kashmir but also to focus the attention of the world on the gross violation of human rights and repression that the people of Baluchistan and Pakistan Occupied Jammu and Kashmir are facing.

These regions are in the throes of a massive humanitarian crisis towards which the attention of the world needs to be focused. Pakistan hand in engineering of a huge propaganda campaign in Kashmir to mislead the young impressionable boys and engineer violence also needs to be exposed to the world.