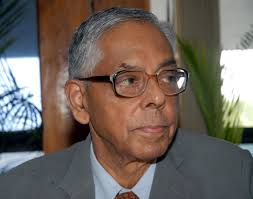 The Kashmir Valley is probably the most talked about region in the world, definitely so in India. Volumes are written and spoken on a daily basis. Most unfortunate and depressing are instances when eminent thinkers write about Kashmir in a partisan manner to serve their personal and political interests.

A potent example is a recent article, “Adrift in the valley” by former National Security Advisor (NSA) M.K. Narayanan that has been carried by The Hindu as an opinion lead on May, 30, and has also been picked up by some Kashmir based newspapers.

In his article, Narayanan has built a doomsday scenario in Kashmir. The reasoning however is high on rhetoric and low on analytical content,

“There have been periods in Kashmir’s recent history when the state appeared to be on the brink, and only deft handling helped retrieve the situation,’ he says. Here, very cleverly, he is creating an impression that some deft handling during his tenure helped bring Kashmir back from the brink on many occasions.

One would like to ask Mr. Narayanan as to why Kashmir reached the brink over three consecutive years from 2008 to 2010 under his watch in the first case?

A situation that equals the volatility of 2008-10 has not come by in the two years that NDA has been running the central government and the BJP-PDP coalition the state government.  In fact, separatist and anti-national elements have made concerted bids to engineer incidents that can lead to mass uprisings and protests but have failed. An example is the case of a molestation of a girl in Handwara which was clearly engineered by anti-national forces but did not yield the required unrest and disruption.

Mr. Narayanan goes on to denounce the present government as being in “denial mode” and unable to grasp the “Gravity of the situation” in Kashmir, which according to him is the result of the BJP policy of “the centrality of Article 370 and the erosion of the special status in Kashmir.”

This is a falsity!! The NDA government has made no move to remove Article 370 or tamper the special status of Jammu and Kashmir. Yes, there is a well defined movement to create awareness about the legal and political aspects of Article 370 and the manner in which it is harming rather than benefitting the people of the state. Surely, there is nothing wrong in creating such awareness.

Quite evident in this comment is Narayanan’s attempt to pressurise the BJP-PDP coalition government by creating an impression that the Congress is amenable to Jammu and Kashmir remaining under the ambit of Article 370 in perpetuity.

Mr. Narayanan further predicts a “Hot Summer” in Kashmir this year with more infiltration bids and terrorist attacks and says that this would be due to the wrong policies of the present government. He sums up by saying that gun battles (during counter terrorist operations) are lasting longer in Kashmir because, “many of the infiltrators are finding shelter and refuge with Kashmiri families, reminiscent of and reverting to the situation that existed in the 1980s and 1990s.”

It is surprising that Mr. Narayanan holds such frivolous views. Does he not know the statistics which point towards less success in infiltration attempts because of enhanced vigilance (both manual and electronic) along the Line of Control? Does he not know that security forces are these days launching surgical counter terrorist operations based on specific information being provided by the locals themselves and conducted jointly by the Army and the Police? Could such success be possible if the security and political situation in the valley was on the downswing and if common Kashmiris were helping the terrorists?

Mr. Narayanan’s reasoning for gun battles lasting longer is simplistic. The fact is that counter terrorist operations are being carried out in a more deliberate manner in keeping t with the policy of ensuring zero collateral damage in terms of both civilian life and property. Surely Mr. Narayanan should not harbour a grudge about that.

One last question to Mr. Narayanan – Sir, did you visit Kashmir and see the situation on ground before sitting down to write his article?

The article has also been carried by The Kashmir Monitor, a Kashmir Valley based newspaper that has a perceptible tilt towards separatist thought and loses no opportunity to propagate an anti- India stance. The inclination of the piece towards the separatist agenda is thereby established.

The real reason behind writing this piece is not hard to find!! M.K. Narayanan, it is well known, has prospered due to an alignment with the Congress party. Dr. Manmohan Singh, on assuming the office of prime minister for the first time in 2004, appointed him Special Advisor on Internal Security to the Prime Minister and then elevated him to the position of NSA on the demise of JN Dixit in 2005. He remained NSA till 2010 and was then awarded for his service with appointment as Governor of West Bengal on 20 January 2010. He resigned from the gubernatorial post in July 2014, before the end of his term, when the NDA government came to power.

For Narayanan the present constitutes payback time to the beleaguered Congress leadership and the only means at his disposal is the penning down of such loaded articles.

Sadly, it is the people of Kashmir who have to bear the brunt of such biased airing of views. All those who read the piece about Kashmir written by Mr. Narayanan will form a pessimistic opinion about the place and its people and this will negatively impact their lives both socially and economically. There will be less people inclined to do business in Kashmir, less people planning holidays in Kashmir, just because Mr. Narayanan, in his wisdom, feels that the situation is deteriorating over there. Is this fair? If we cannot do something good for the Kashmiris at least we can leave them to deal with their situation themselves instead of pontificating from a thousand miles away.