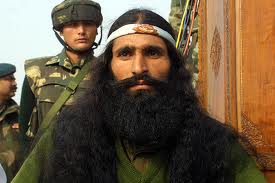 Stating that around 700 militants are waiting to sneak into Jammu and Kashmir from Pakistan occupied Kashmir (PoK), General Officer Commanding (GOC) 15 Corps, Lt. General Syed Ata Hasnain said that army has put in place anti-infiltration surveillance system along line of control (LoC) to check infiltration. He added that in the past Lolab, Tangdhar and Gurez have been used by people from across to sneak in. “Accordingly, we’ve increased our surveillance so that nobody infiltrates. There would be minimum levels of infiltration during this year even if around 700 militants are reportedly waiting to infiltrate”. In response to a query, he said the situation in Pakistan and Afghanistan always has an impact on situation, here. Director General of Police Kuldeep Khoda on March 18 said that graph of militancy has come down, but it hasn’t been wiped out completely. “Terrain on borders is rough and tough. It is difficult to keep track of people trying to sneak in”, he said while talking to media at Police Training School, here.