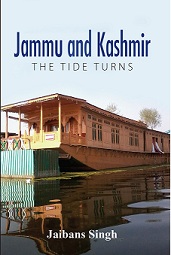 Jammu and Kashmir -The Tide Turns

Unravelling the many aspects of the state of Jammu and Kashmir is a tough task for anybody, given the region’s contradictions.

In his book, Jammu and Kashmir – The Tide Turns, the author, Jaibans Singh, while highlighting these contradictions, also seeks to send out a message of hope for a better future for a badly bruised and traumatized yet encouragingly resilient people in the new millennium.

This 12 chapter 305-page book published by Lancers takes the reader on a journey of Jammu and Kashmir that revisits some of the main events of the first decade of the new millennium (the 21st).

It speaks of the presence of pressure groups and inimical forces that have sought to impose their agendas on a people, a majority of whom have a simplistic outlook of life, but possess the spirit to defy all odds to realize their cherished right to live a life of freedom and dignity in a continuously evolving and vibrant democratic India, notwithstanding debilitating factors such as petty politicking, socio-economic chaos and sponsored extremist attacks.

That the region has gone through some testing times has never been in doubt, but in this book, the author, seeks to take the reader on a new path, away from the oft-repeated emphatic and historical exposition of a territory in dispute, to a view that change is constant, and that these changes need to be factored in for updated timely assessment.

Jaibans Singh’s book reflects the evolution of Jammu and Kashmir in the first decade of the 21st century. It speaks of an environment that has experienced spells of peace followed by streaks of violence perpetrated by forces of disruption that were eventually subjugated by security forces and the will of the people.

As the author says, the central idea behind the writing of the book has been to generate ideas for future debate, and to provide food for thought for “many more books” on Kashmir in the future. The book, therefore, makes no claim to providing suggestions for a lasting solution to vexed issues affecting the region, but provides for expanding the scope of debate in an energetic sense, which in turn, may result in the emergence of “out-of-the-box” alternatives.

The book attempts to address politico-security events, providing invaluable inputs on what needs to be done to avoid further polarisation of Kashmiris from the rest of mainstream India.

It speaks of the statesmanship exhibited by the NDA and UPA Governments to set things right in Kashmir through a spate of development-linked initiatives, the courage and fortitude of the armed forces to ensure the freedom of a people in-spite of being repeatedly “maligned, misunderstood and misrepresented” by their detractors, besides the onerous challenge before mainstream leaderships to arrive at acceptable solutions in the face of public belligerence.

The author, Jaibans Singh, is a retired Colonel of the Indian Army. He contributes extensively to matters pertaining to defence and security of the Indian nation and has an abiding interest in the state of Jammu and Kashmir.

Jaibans Singh is right in concluding that improvements in Kashmir can only be possible through ‘more honest and sustained effort to maintain the momentum till such time as peace is firmly embedded” to allow the region to get onto a path of “irreversible progress and prosperity”.