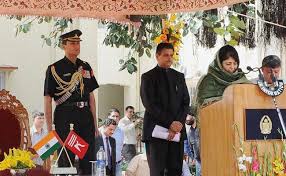 In the corporate world there is an important process called “orientation.” It involves acquainting a new employee with the company, its management, operating procedures, work culture, rules and regulations etc. New employees are expected to shed their old practices and adopt those followed in their new place of work.

Kashmir is presently going through a process of orientation at the highest level. Mehbooba Mufti is being put through the paces for her new role as chief minister of the state. The recent situation of violence in the state is her first challenge. She would have realised the need for a paradigm shift from being a belligerent leader of the opposition to the person responsible for the administration of the state.

She must be remembering with considerable nostalgia the heady, carefree days when under similar circumstances she would energetically castigate the government for “mishandling the situation” and “lacking sensitivity.” Now her “sensitivity” is on the chopping block and all eyes are on her reactions.

Has anybody noticed that Mehbooba has, in the last few days since this violence has erupted, not demanded revocation of Armed Forces Special Powers Act (AFSPA) as the best method to deal with the “dissent of the youth?”

In Kashmir, the evil agenda of the disruptive forces stands fully exposed by the courageous statement made by the young woman in the eye of the storm now popularly referred to as the “Handwara girl.”

It is because of the alleged molestation of the Handwara girl by an army man that the present cycle of violence sparked off. The girl has since denied the charge first by video, then by a statement to the police and finally in front of a magistrate.

In fact, she has put the onus of the molestation on two local boys who are still roaming around scot free. Such is the justice system prevalent in the Kashmir Valley under the leadership of Mehbooba Mufti.

Those who had carefully orchestrated the entire incident with a specific intent of getting an army bunker removed in Handwara, while maligning the image of the army, now have egg on their faces.

While building the frenzy for the agitation they had factored a rapid vanishing of the Handwara girl or her acquiescence under pressure to their version of the story. The girl spoiled the party by displaying a courageous disposition. She has insisted upon standing by the truth despite the pressure. No amount of contemptuous adages on social media and character assassination has dissuaded her from following the path of righteousness.

By so doing, she has set an example for all progressive youth of the state to challenge the dastardly hegemony of anti-social elements.

The Handwara girl has also taken the wind out of the sails of the electronic media that thrives on sensationalising such unruly situations in Kashmir. The bleeding heart journalists who normally rush to cover the strikes are nowhere to be seen, nor are the news hours abuzz with “debates” on the situation. It is quite evident that nationalist action does not sell with our television media, one has to be anti-national to see his/her face on television and become a “celebrity.”

The disruptive elements, by now flustered with the turn of events, have reacted in a retarded manner. Instead of withdrawing with tail between their legs, they have attempted to escalate the hostility with stone pelting attacks on security forces.

The cynicism and petulance of the separatist, disruptive elements that is motivating them to follow such a destructive path is not going down well with the people of the region who feel that they are being harassed for no reason.

Such videos are now freely available on social media and the entire world, especially Indians, are seeing the manner in which security forces are being treated in the Kashmir valley by a few paid agents of the country’s enemies. That they not being able to retaliate because of restrictive standard operating procedures and process is not going down well with the people of the country.

The entire nation is, by now, revolted by the humiliation that its security forces are being forced to bear because of faulty political policies and directions. The outrage is spilling over and the government is being called upon to correct the situation.

Some civilians, after watching the video footage, feel that a civil war like situation is prevalent in the valley. They do not realise that such a situation has been existing there for many years now. Stone pelting of much large scales has been resorted to earlier and quelled with great perseverance by the security forces.

In fact, this phase will peter off soon enough since the tourist season is about to begin and the separatist elements are bound to allow the people to earn their keep for the year, hence, they will stop their disruptive activities. This is the standard pattern followed in Kashmir.

The government at the centre, however, cannot ignore what is happening in Kashmir. It has to read the writing on the wall and respond to the disgust that the people are feeling due to the state of affairs prevalent there. Despite a placatory agenda of alliance, the government now needs to institute a course correction, wherein, at least the trouble mongers are identified and brought to book.

The first point in the agenda of alliance that needs to be cut out is opening of channels with the separatist leadership. It has to be replaced with a resolve to punish them for their anti-national activities.

The second agenda on the chopping block should be the demand for revocation of AFSPA. Instead, the powers of the security forces need to be increased to deal with civil strife sponsored by inimical forces.