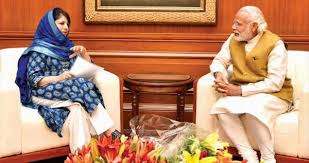 Mehbooba Mufti, chief minister of the trouble torn state of Jammu and Kashmir has, since the last week or so, been building up a carefully structured political narrative. It seems that she has assessed the political situation as not conducive for her party or for her personally, and is out to salvage her dwindling political stature to whatever extent is possible.

Her political strategy is based on the time tested element of shifting the blame for the existing situation on to the centre. To achieve this she has resorted to addressing rallies in Kashmir and making statements in the state legislature, as the initial steps. The final prong has been put in place on April, 10, when she held meeting with Prime Minister Narendra Modi and also met the Defense Minister, Nirmala Sitharaman.

While the Prime Minister’s Office (PMO) and the Ministry of Defense (MOD) refrained from issuing a press release on the outcome of the meeting, the otherwise moribund state publicity machinery proactively released its version.

Some basic points, quite similar to those spoken earlier, were emphasised in the press release. To Prime Minister Modi, Mehbooba stressed the need to find ways to end violence in the valley by addressing the alienation of the youth; peaceful engagement with all “stakeholders;” and a boost to cross Line of Control movement. To the Defence Minister, Mehbooba highlighted the need for a more humane approach by the security forces and avoidance of collateral damage during operations.

The points put across by the chief minister are “old wine in a new bottle.” Mehbooba has not come up with any out-of-the-box, dynamic ideas to deal with the situation. She has not elaborated upon the role that she would play personally in the entire game plan.

There are many things that she can do to reverse the situation! She has admitted that violence is the offshoot of alienation of the people, especially the youth! If the people of Kashmir reject the politics of divisiveness and disruption being exported from Pakistan, alienation will be contained and the valley will become peaceful. The moment Pakistan realises that the people of Kashmir are not longer ready to be taken in by its evil machinations, it will have no option but to retract and ceasefire violations will become redundant.

If the country can have a Beti Bachao Andolan (Save the daughters campaign) then why can Kashmir not have a Beta Bachao Andolan (save the sons campaign)? The initiative could take the form of a massive awareness campaign designed to expose Pakistani propaganda to lure the youth towards the self destructive path of terrorism. It could also highlight the benefits that the country can provide to the people if peace prevails.

The aforementioned “killing of two birds with one stone” is not something the prime minister or the centre should be expected to do. It has to be done by the elders, the civil society and the people of Kashmir and it is here that Mehbooba and her party can play a big role.

An extensive information set up that can launch the required level of psychological campaign would be necessary. Maximum participation of the people can be elicited by application of all forms of communication from interpersonal to mass media. Presently a sizeable chunk of the local media is under the influence of Pakistani agents due to money power or fear of intimidation or both. Media outlets with a nationalist mindset will need to be leveraged.

It is here that the resources of the centre and be combined with the will of the state to reverse the situation. If the state government, under Mehbooba Mufti, takes the first step not only the Union government but the entire nation and the people of Kashmir will stand behind her. What is required is the first step!

Youth are mostly emotional and impressionable, when they see the concern of the leaders and their elders in society they will definitely turn around.

Once the youth have been effectively engaged, the state government can crack down on the Mosques and Madarasa’s (seminaries) from where the fundamentalist venom is being spewed; simultaneously it can put in maximum effort to revive the intrinsic Sufi culture and Kashmiriyat. Such acts will ensure that the indoctrination of teenagers is contained.

No amount of development can pay dividends if the minds of the people are not steered towards the right direction. Pakistan has patiently nurtured the Kashmir psyche to serve its ends; it will have to be defeated in its own game with weapons similar to the ones that it used!

The security situation will offer a deeper challenge. It is very difficult to determine as to where a line dividing human rights violation and security can be drawn. It needs to be understood that the operations are being undertaken to save the lives of innocent citizens and they need to be respected as such. Of course, the standard operating procedures should be people friendly and use of technology should be optimised to ensure minimum discomfort due to security imperatives. More importantly, loss of lives of innocent civilians and brave soldiers as collateral damage in counter terrorism operations also needs to be curtailed.

As chairman of the Unified Command it is the job of Mehbooba Mufti to brainstorm with her senior commanders and find ways and means of making security operations more “humane,” as she rightly desires. In this she does not need the support of the Union Home Minister or the Union Defence Minister.

Experts are very rightly pointing out that Kashmir is on the edge with more and more youth gravitating towards militancy and the organs of state being perceived as non-performing. It is also true that Kashmiri’s crave for peace so that they can get on with their lives. It is for this peace that they come out in large numbers to vote during elections.

The political leadership in Jammu and Kashmir needs to be sensitive to the aspirations of the people and the problems that they are facing. Mehbooba Mufti, as the incumbent chief minister, has to lead the charge in changing the narrative.

(Dr. Simrit Kahlon is an academician and geo-political analyst)