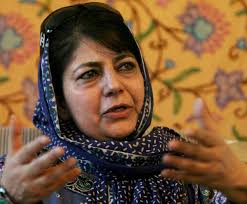 The sad demise of Mufti Mohammad Sayeed, former Chief Minister of Jammu and Kashmir, patron of the Peoples Democratic Party (PDP) and a towering leader, has left a void in the state that will be difficult to fill. The process to fill this void has become all the more challenging since his daughter and political heir, Mehbooba Mufti, continues to be indecisive about the future course of the party. As a result, the state is presently under Presidents rule.

That a sensitive state like Jammu and Kashmir is without an elected government, despite having an elected dispensation in place, is indefensible. It is a situation that can have far reaching negative consequences.

Terrorist elements operating against the state from Pakistan are on the lookout for such situations to further their evil agendas. One can literally hear the likes of Hafiz Saeed and Syed Sallahuddin shouting into loud speakers that, “Kafirs (infidels) are denying the poor people of Kashmir a legitimate right to government. The Government of India is committing atrocities under the garb of Presidents rule.”

A spike in terrorist initiated violence along the Line of Control (LOC) and in the hinterland can be expected as a direct off shoot of the tense political situation in the state.

The whole world will now see a Governor unfurling the national flag in Jammu and Kashmir on Republic Day when the elected chief minister of the state should have been doing so. Some may consider this to be mere symbolism, but, it is definitely not insignificant. A wrong impression, that will be difficult to live down, will permeate to the international community.

The people of the state who came out to vote for an elected government braving all odds and at great personal risk would be feeling quite let down. The longer it takes to get the new government in place the more will be their frustration. The attendant situation will create space for disruptive and divisive elements within the state to cause dissension.

By the time the political parties resolve their petty differences, many more young men would have been drawn towards militancy due to the burgeoning trust deficit.

Winters are a crucial time in the state. It is the period when the state machinery can work towards ameliorating the problems faced by the people due to extreme cold conditions and earn their goodwill. With no government in place no political dividend will be forthcoming. A decision to delay the formation of the government, thus, amounts to committing political harakiri; it is a wonder that the parties in government are being so short sighted.

When seen in the context of what is right and honourable, the political leaders of the state should be getting sleepless nights for having let down their people at this crucial juncture.

Relations between India and Pakistan have, once again, hit a road block in the aftermath of the Pathankot terror attack. An attempt is being made to resurrect the dialogue process by a mature out-of-the-box handling of the situation. At this juncture, a strong elected government in the state is crucial for India to negotiate from a position of strength. It would have been good if the central government had the option of keep the Government of Jammu and Kashmir in the loop in its parleys with Pakistan. Decision making is bound to suffer in the absence of an elected government in the state.

Certain power centres in the PDP are attempting to exploit the passing away of Mufti Mohammad Sayeed to change the political dispensation of the state. They are pressurising Mehbooba to walk out of the coalition with the Bharatiya Janata Party (BJP) that her father stitched together in a courageous show of statesmanship and then nurtured with great maturity.

There is an equal number of party cadre not in favour of any precipitate action. They have not only spoken out at party meetings, but have also expressed their views in the media. Capt. Anil Gour, a senior PDP leader in his article, “PDP-BJP: Mufti Sahab’s legacy must survive at all cost” says, “The more sage and experienced voices, however, are rooting against any such precipitate decision. Not only would it constitute a deviation from the legacy left by Mufti Sahab, it would also engineer turmoil in the state….” The article has been carried by a large cross section of media in both Jammu and Srinagar, thus showing wide acceptance of the concept propagated.

The core group of the PDP has authorised party president Mehbooba Mufti to take a decision on government formation. However, the core group has not formally declared Mehbooba as the universally acceptable chief ministerial candidate of the party and herein lies the catch. A wait and watch game is being played out in certain quarters.

The ball is now fairly and squarely in the court of Mehbooba Mufti. It is she who will have to bell the cat to get the Government of Jammu and Kashmir in the post Mufti era going.

It is well known that Mehbooba Mufti shared a very close relationship with him since he was also her political mentor, senior colleague in the party and soul mate, which would make reconciliation with the loss all the more difficult to her. Her emotional trauma at this stage is understandable.

At the same time it is important to note that any delay in ushering stable governance has already caused a lot of harm to the coalition government in J&K and to the nation at large. The security forces, in particular, would be very concerned since the situation will have an adverse affect on the all important security situation in the state. For the sake of the people whom her father loved so dearly, Mehbooba will need to find the strength to put her grief behind and take a decision. While doing so, she should simply keep her father’s vision and legacy in mind. All else will automatically fall in place.

(Jaibans Singh is a columnist and author. @jaibanssingh)