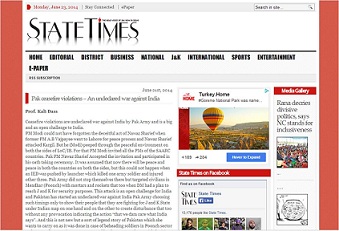 A Jammu based newspaper, State Times, on Saturday, June, 21, carried an interesting article, “Pak ceasefire violation – an undeclared war against India” written by Professor Kali Dass. Professor Kali Dass comes across as a man with a nationalist feel who is disturbed by the policy being followed by the neighbouring nation. However, he does not seem to be an expert on military affairs; the strategy and the policies that guide the same. The solutions that he has advocated, though nationalist in nature, may not be feasible on ground.

The most significant observation has been made by Professor Kali Dass in the tail end of his article where he has questioned the ability of the Indian army to counter infiltration. “When borders have been fenced with barbed wires and distance between two posts can be observed by the OPs, then how the militants dare to enter this side,’ questions the good professor in his article. He goes on to call for an end to the process of infiltration with a changed “strategy on the LOC and IB.”

This observation needs to be clarified. Fencing of the line of control was done with great effort about a decade back; it has paid handsome dividends by severely restricting the movement of infiltrating terrorists into Indian territories. Constant endeavour is made to boost this obstacle with the latest electronic devices like cameras, radars etc. The obstacle is supplemented by constant patrolling and area domination.

However, if India can put in so much of effort to stop the Jihadis from crossing over, they also have the motivation to find new and innovative ways to attain success; in this they are assisted by the treacherous terrain and weather conditions obtainable in the region. Thick vegetation and undergrowth restricts human vision and also the range of the electronic devices; fog and snow adds to the problem; the many streams and depressions in the area cannot be covered by the fence. Pakistan army also comes in to the assistance of the infiltrators by engaging Indian troops through what is termed as ceasefire violations but are, in fact, covering fire to facilitate infiltration.

Experts on the subject agree that with the help of man-made obstacles like the fence, infiltration of a determined enemy can be curtailed but it cannot be stopped altogether. The degree of success of the fencing and other efforts made by the army to counter infiltration is such that from the tens of thousands that came in a few decades back only a few hundred are operational now. This number will also go down with time.

It would also be worthwhile to assure the good professor that “strategy” to deal with infiltration is dynamic in nature and is changed regularly to meet the constantly evolving challenge. His concern is well appreciated but it is not based on any deep knowledge of the manner in which counter infiltration and counter terrorist operations are carried out and the intensive planning that goes into their execution.

Professor Kali Dass goes on to speak of “weakened retaliation against ceasefire violations.” He feels that the Army should be more aggressive and proactive in dealing with the situation. The decision to escalate the level of response is not taken by the army; it falls in the political domain and it is not easy for the government to tread this dangerous path that can lead to unprecedented disaster and destruction.

Defence Minsiter Arun Jaitley, during his first visit to Jammu and Kashmir has expressed full confidence in the capability of the Indian army to deal with any adverse situation that may develop along the line of control and the border. Surely, the minister knew what he was talking about given the fact that the statement was made in the aftermath of a massive ceasefire violation by Pakistan army in Poonch. In case the government wanted the army to escalate the level of response the Defence Minister would have spelled out the policy.

The professor talks of “long range reply (by the Indian Army)of the unprovoked ceasefire violations” and “retaliation of such intensity that the earth of Pak posts should be made up and down so that the place used for targeting Indian side may not find their position to target again from the same spot.” In a naive and simplistic manner he is trying to advocate a massive military response to Pakistani transgressions on the border; he needs to understand that such a response would involve bombing by the air force and helicopter gunships as also use of missiles and artillery warheads to flatten the area.

Surely we must give credit to the government of India, be it Congress or BJP led, that they would have considered this option. Surely we need to be confident that, when called upon to do so, our army will be only too willing to go deep into enemy territory to teach a solid lesson to perpetrators of heinous acts. The point here is whether it is good for the country, the sub-continent and the world.

Expert opinion would suggest that there are some very good reasons for not following this line of thought. Will such a precipitate action not be deemed to be an “Act of war” by the Indian state against Pakistan? Will it not elicit a negative react ion from the international community? Will it not give the fundamentalists in Pakistan a reason to usher the two nations into a debilitating long drawn out conflict? Can it not lead to a nuclear face off? The there is the humane angle – would it be right for the much stronger Indian nation to cause unmitigated misery to the people of Pakistan only due to villainous machinations of a few persons? Is it not better to try, as far as is possible, to handle the situation at the local level as is being done presently by the army quite adequately, in fact, with considerable success?

Constant sermons by the media on ceasefire violations and infiltration do not serve the national purpose. By targeting our government and our army for lack of application we end up giving an indication to Pakistan that it is achieving success in its nefarious activities. A better option would be to embarrass the Pakistanis for the illogical course that they are following.