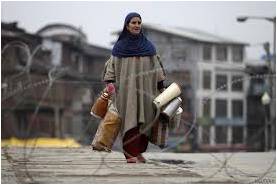 The unfortunate death of two young boys in Kashmir has opened yet another very sad chapter in the turbulent history of the land. Irfan Nabi Ganaie, a student of class 12 died of gunshot wounds during an anti-terrorist operation launched by the security forces at about 0300 hours on Sunday, June, 30, 2013, in the vicinity of his village, Markundal, in north Kashmir. The second boy Tariq Ahmad Laharwal died during a protest that turned violent and forced the army personnel to fire in self defence. This is a very big loss for the families of the two boys; something that would move the heart of each and every person. No amount of money can compensate the irreparable loss, yet, a decent reparation from the state government would, to some extent, recompense the families of the young boys.

The General Officer Commanding the Counter Insurgency Force whose troops were involved in the operation has expressed deep sadness and sympathy with the bereaved families and has promised a thorough probe into the incident. What is worrisome, however, is the manner in which the death of these young boys is being exploited to instigate disruption in the valley. The tourist season is at its tail end and the Amarnath Yatra is underway; this has always been the most opportune time for the separatist and divisive elements to create commotion and attempt to re-establish their otherwise dormant relevance. These forces are, as it is, looking for an opportunity of this nature to trigger their reprehensible agenda and, to the eternal misfortune of the land, the incident has provided the most apt trigger.

The challenge now lies in not only providing solace to the bereaved families in whatever manner that is possible but also in ensuring that the evil designs of the divisive elements are not given any space to fructify. The first requirement is to subject the incident to a thorough investigation. The army has already confirmed that the incident is being investigated; the Jammu and Kashmir Police will also carry out its investigation. In case there was a wrongdoing by the men in uniform it will be exposed soon enough and the guilty will be brought to justice in accordance with the law of the land. What needs to be ensured is that the investigation is speedy, transparent and impartial and the result is there for all to see in a time bound manner.

Certain forces are already working overtime to scuttle the investigative process by creating smoke screens. Contradictory statements are doing the rounds; outlandish motives are being attributed to the action of the army; suddenly an ‘eyewitness’ has come into the scene; the unstable emotional condition of the bereaved families is being exploited to the hilt. All these activities can seriously hamper the investigative process and wash away significant evidence. It is the duty of the State to ensure that the investigation process is not scuttled under any circumstances.

The second agenda of the forces of disruption is to cause civil unrest by instigating the people. Already the valley has witnessed two days of strikes and Bandhs. This matter has to be dealt with politically to ensure that normality is not affected and that the cycle of violence which has been a fall out of such instances in the past is not allowed to come by. All differences between the parties in government and those in the opposition should be set aside to ensure maintenance of law and order; the unstinted support of the people, of course, is most important.

The incident will also be used to the hilt to damage the reputation of the Army in the valley. The good work over decades is already being set aside to paint the force as ‘trigger happy killers’. An Army school that is providing quality education in the area and has produced excellent results was torched; the damage, though considerable, will be repaired with time but the symbolism of the torching cannot be ignored. While looking for a thorough investigation there is a need to protect the organisation from malevolent intent.

Whenever an incident of this nature takes place the separatists make snide remarks about the policy of zero tolerance to human rights violations as articulated by the Prime Minister. What they say is outright propaganda, completely divorced from reality. Over the years the State government and the security forces have been working most tenaciously to apply this policy on ground. All standard operating procedures have been directed towards this goal and the results have been exceptionally good. Unfortunate incidents of the type that has happened now are exceptions and not a norm. They cause immense pain to each and every person of the nation, but have to be accepted as human failings. Undoubtedly, the state administration and the security forces will learn a lesson from the incident and further strengthen their standard operating procedures to an extent that no such thing is allowed to happen in the future. Now is the time to get a system in place where avoiding collateral damage could be given precedence over anti-terrorist measures.

There should be no doubt that the unfortunate death of the two young boys will lead to a concerted attempt by divisive forces to trigger the kind of violence witnessed from 2009 to 2011. All such schemes have to be thwarted with utmost energy and resolve in a united manner by the people and the political leadership. The best possible tribute to the departed souls would be to ensure that their beloved land is not subject to the kind of trauma that it is attempting to come out of by fighting some very determined and wicked forces. Social turmoil should not be allowed to raise its evil head all over again. This is the acid test for the Kashmiri leadership and the State government.