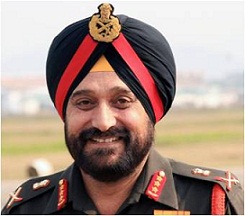 The formal announcement for the next Chief of Army Staff of the Indian Army made on Saturday, March, 03, has put an end to all doubts about who would succeed the present Army Chief, General VK Singh, who recently lost his battle over the age issue in the Supreme Court. 59-year-old Lt General Bikram Singh, presently the Eastern Army Commander, will head the 13-lakh strong force and have a tenure of just over two years till August, 2014. A formal announcement from the spokesperson of the Ministry of Defence said, “The Eastern Army Commander, Lt General Bikram Singh, PVSM, UYSM, AVSM, SM, VSM, ADC has been designated as the next Chief of Army Staff, in the rank of General, with effect from the afternoon of May 31, 2012. He will succeed the present COAS, General V K Singh, PVSM, AVSM, YSM, ADC, who retires from the service on May, 31, 2012.”

“This is a great honour. I want to thank the government for reposing faith in me. I hope to live up to the honour and values of this great institution,” Said General Singh to the Times of India after Defence Secretary Shashi Kant Sharma informed him about the government’s decision. Lt General Singh was also given the government notification of his appointment.

Lt General Bikram Singh was commissioned into the Sikh Light Infantry Regiment on March, 31, 1972. During the last four decades, he went though the successful command of an Infantry Battalion and a Brigade in operational environments with distinction before moving on to the higher echelons. In the rank of a Major General he commanded an Infantry Division in the sensitive Akhnoor sector of Jammu and Kashmir and also served as Deputy Force Commander of the multination UN Peace Keeping Mission in Congo. As a Lt General he commanded the elite Srinagar based 15 Corps before taking over the Eastern Army.

Lt General Bikram Singh has studied with distinction at the Defence Services Staff College, the Army War College, Mhow and the US Army War College, Pennsylvania. He also has an M. Phil in Defence Management from Indore University. General Singh was in the Military Operations Branch at Army Headquarters during the Kargil war and was responsible for giving a daily brief on the progress of operations, a duty that he performed with distinction. He has also served as Director General, Perspective Planning, which is an internal think tank of the Army responsible for giving inputs on development of capability and force structures. He is a recipient of many gallantry and distinguished service awards to include Param Vishisht Seva Medal, Uttam Yudh Seva Medal, Ati Vishisht Seva Medal, Sena Medal and Vishisht Seva Medal. He is one of the Honorary ADCs to the President of India. With this professional and academic background, General Singh is widely perceived to be adept in the grasp of strategic affairs and higher direction of the country’s defence.

As per the normal practice, the appointment of Chiefs of Defence Services is announced 60 days in advance but in this case, the government made the announcement 90 days in advance due to the unseemly controversy that developed with regard to the date of birth of the outgoing Army Chief, General VK Singh. The declaration removes uncertainty over the successor in the wake of rash and speculative media reports that were an off shoot of the controversy.

General Bikram Singh’s name was also dragged into controversy on a number of occasions. It is to his credit that, all through the controversy, he maintained a dignified silence despite grave provocations. The situation prompted the Government to carry out an extensive intelligence and background check before taking up the matter of selection with the Cabinet Committee on Appointments. His name was selected from a panel of three senior Army Commanders which was put up to the committee for final approval. The other two names that figured in the list were Lt General KT Parnaik, the Commander of the Udhampur based Northern Army and Lt General SK Singh, the Vice Chief of Army Staff.