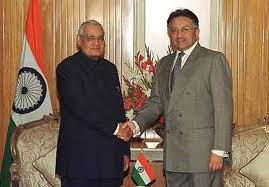 It has been many months now that India and Pakistan are trying to come to grips with the potentially explosive situation of cease fire violations along the line of control and the international border. The beheading of an Indian army soldier in the beginning of this year (2013) and killing of one more was the precursor to a situation that has worsened over the months. The leadership of the two countries has often stated a firm resolve to reverse the trend but somehow it is not translating into tangible action on ground. The sharp postures adopted by the media are also not helping matters.

For many years before the ceasefire of November 2003, firing along the line of control and the international border was a routine. It caused great suffering to the people residing in the border areas on both sides. The statesmanlike gesture on the part of the leadership of both India and Pakistan led to a reversal of the very volatile situation along the Indo-Pakistan boundaries. Few would now remember that the matter moved forward due to the initiative by Pakistan; the then Prime Minister of Pakistan, Zafarullah Khan Jamali, called upon his troops to ceasefire during the holy festival of Eid. India responded with equal magnanimity and went a step ahead to offer ceasefire along the actual ground position line in the Siachen glacier also; this proposal was accepted by Pakistan and the ceasefire came into effect in November, 2003.

At that stage also there were many who held a negative attitude towards the development. It was often said most emphatically that the ceasefire was ‘more symbolic than substantive’ and not much could be expected from it. Others were convinced that it was the result of intervention by the United States to assuage the insecurity being felt by President Pervez Musharraf due to the move out of troops from the eastern to the western border of the country for the war against terror. It would have come as a surprise for pessimists when, apart from sporadic transgressions that were dealt with locally, the ceasefire held for 10 long years. It is only lately that the status of ‘more symbolic than substantive’ has been attained due to regular transgressions The Pakistani commitment to maintain the ceasefire facilitated fencing of the line of control that has greatly assisted in bring down the numbers so far as infiltration is concerned.

At the time when the ceasefire came by distrust between the two countries was at a peak due to the Kargil misadventure in 1999 followed by the attack on the Indian parliament in 2001. The leadership had not changed since the unfortunate incidents. Even though Pervez Musharraf was a Dictator he would have had to take his Army Generals on board before taking a decision of this nature. In India, of course, the democratic process had to be followed; even though the government of the day remains the sole authority to take decisions the opposition is invariably consulted and put in the loop of the decision making process. The view and recommendations of the Indian military leadership is given due importance. Thus, it is difficult to believe that what happened was at the spur of the moment, it was a deliberate decision made public with spontaneity due to political considerations.

Evidently, a lot many leaders on both sides would have walked the extra mile to come to what was a momentous decision of historic proportions. More than the decision, the honesty and resolve with which it was implemented deserves highest approbation. It is not easy for both sides to keep the troops on ground in check considering the eyeball to eyeball manner in which they are deployed yet it was achieved. It would be appropriate to remember Prime Minsiter Atal Bihari Vajpayee, Pervez Musharraf and General NC Vij who displayed courage and statesmanship to do something that benefitted both Nations, most of all the hapless residents of the border areas on both sides whose very lives and become insecure and miserable all over again.

It is for the present leadership on both sides to consider as to what has happened now which is leading to disruption of the peace brought about with so much effort. Is Pakistan safe enough on its western border to de-induct troops from there to meet the volatile situation on the line of control? It does not seem so. Is there any reason for India to put its already fragile economy in jeopardy by opening a military front against Pakistan? It does not seem so. When there is no tangible political, military, economic goal to be achieved by this brinkmanship then why indulge in it at all.

A policy paralysis seems to be in the root of this mess being created. The political leadership of both countries seems to be is looking at the respective armies to bring down the tension. The two armies are, rightly so, not ready to do any such thing without specific political direction because backing off without orders would amount to losing face. Thus, while the leaders play their petty games in air conditioned environments the people and the soldiers on ground bear the brunt of a destructive situation.

Somebody has to take the lead to break the impasse. Either the political leadership tells the armies on both sides to back off or the armies tell the political leaders to either stop the silliness. It would be difficult for the political leadership to go against sane advise coming from the men in uniform. Most of all the media needs to take a more sober view of the proceedings; sensationalism makes it difficult for the decision makers to move forward rationally. With war being out of question there is no point in displaying our inherent foolishness to the world. One can only hope that some statesman with a vision will come by earlier than later to put an end to this madness.