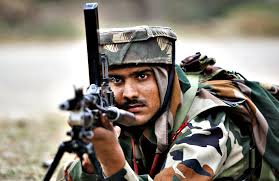 Every few days the nation gets the terrible news of some of its soldiers falling in the line of duty in Kashmir. Defence journalists, perpetually on the lookout for such an incident, are the first to get to know and they immediately get into action. Their first step is to demand photographs and home addresses of the fallen heroes from the publicity departments of the services.

Photographs are then flashed across the media, senior officers of the army are shown saluting the coffin, spokespersons of various political parties are called upon to give comments, talk shows are organised in evening discussion forums where Pakistani speakers get an opportunity to gloat over the incident.

The cremation, which normally takes place the next day in the house of the fallen hero, is covered with sensationalism in mind. Wailing ladies, fathers giving stoic statements of willingly sacrificing more sons for the cause of the nation, children saluting their heroic fathers, form standard fare of the coverage which is repeated through the day.

The ghastly drama gets over as fast as it had started and it is business as usual till the next coffin comes by, so much for sensitivity for the life of a human being, let alone a soldier!

In recent days, with the frequency of coffins coming in having increased, politicians have taken to giving their penny worth of opinion on the security situation in Kashmir.

“I have written five columns, I have written it on different dates. But if you read the five columns together you will get that sinking feeling that Kashmir is nearly lost…..,” says former Home Minister P. Chidambaram. One can decipher an element of glee at the discomfiture of the government in the comment made by P Chidambaram.

Farooq Abdullah, former Chief Minister of the state and President of the National Conference, a regional political party of Jammu and Kashmir, also had some pearls of wisdom to give on the subject.  “Our youth are giving sacrifices. They don’t want to become MLA, MP or minister. They are rendering sacrifices demanding their rights. This is our land and we are its owners, you are not. This should not be forgotten,” he said with a flourish. He is, quite obviously, playing to the gallery and changing his colours to suit the moment like the proverbial Chameleon as always.

These so-called senior leaders of our country have not a single word to say for the sacrifices being by the Indian Army and the security forces to keep control over the challenging situation that they are so casually pontificating about. They do not utter a single word of caution for those in Kashmir who are blatantly disrupting peace by helping terrorists.

Both Congress and National Conference parties have considerable cadre strength the Kashmir valley. Why have they not come up with a workable plan to mobilise the cadre to control the situation? If they feel that the posture adopted by the security forces is not correct, why are they not engaging with them to bring about a change?

One sanctimonious statement in a function not even organised to discuss the grave subject and they feel that their duty is done! Can it get more pathetic than this?

Do they not realise that enemies of the country who are operating in Kashmir use this kind of statements to motivate their terrorist and mercenary cadres into increasing activity?

The government, both the state and national level, also needs to pull up its socks and move beyond spouting inane counter statements. Can the government say with confidence that it is optimally utilising all resources at its disposal to address the situation in Kashmir? If so, then how is the Hurriyat being able implement its abhorrent protest calendars with such relative ease? What is the intelligence set up and the local police doing?

It has been more than a decade since the army and the security forces have controlled the level of violence and terrorism in Jammu and Kashmir and created a conducive environment for the political initiative to be initiated. The environment has been privy to the Congress, National Conference, BJP, PDP etc while being in power.

None of the political mandarins of these parties have been successful in optimising the platform that has been provided while the security forces are being called upon to maintain the threshold, which is being done at great cost of life and effort.

The writing on the wall is very clear – the coffins of fallen soldiers are simply a means of furthering personal agendas of the political class and the media.

A soldier fights and gives is life for a cause that is honourable, righteous, justified in the interest of the country that he has sworn to protect. The nation should not leave him at the mercy of such people who have no regard or sensitivity for his sacrifice.

What P Chidambaram and Farooq Abdullah have said and what others are saying in the same vein is stupid and immature. It needs to be contested by all right thinking citizens of the country.

Simultaneously, the government needs to get its act together and come up with ways and means of reducing casualties of the security personnel. For doing so it has to put in use all means at its disposal be they political, diplomatic or operational in nature. It should not fight shy of carrying out changes in operational policy even if they have adverse political consequences.

That our soldiers are the best in the world and not afraid to give their lives for the country is amply proved time and again. It is now up to the Nation to stand up for them. A price has to be put on their precious lives so that their sacrifice is worth the effort. One segment of national power cannot be called upon to bear the brunt of the failure of the Nation as a whole.

It has to be appreciated that the life and honour of the soldier is sacrosanct! The macabre dance of death that is played out with coffins every few days simply has to end.