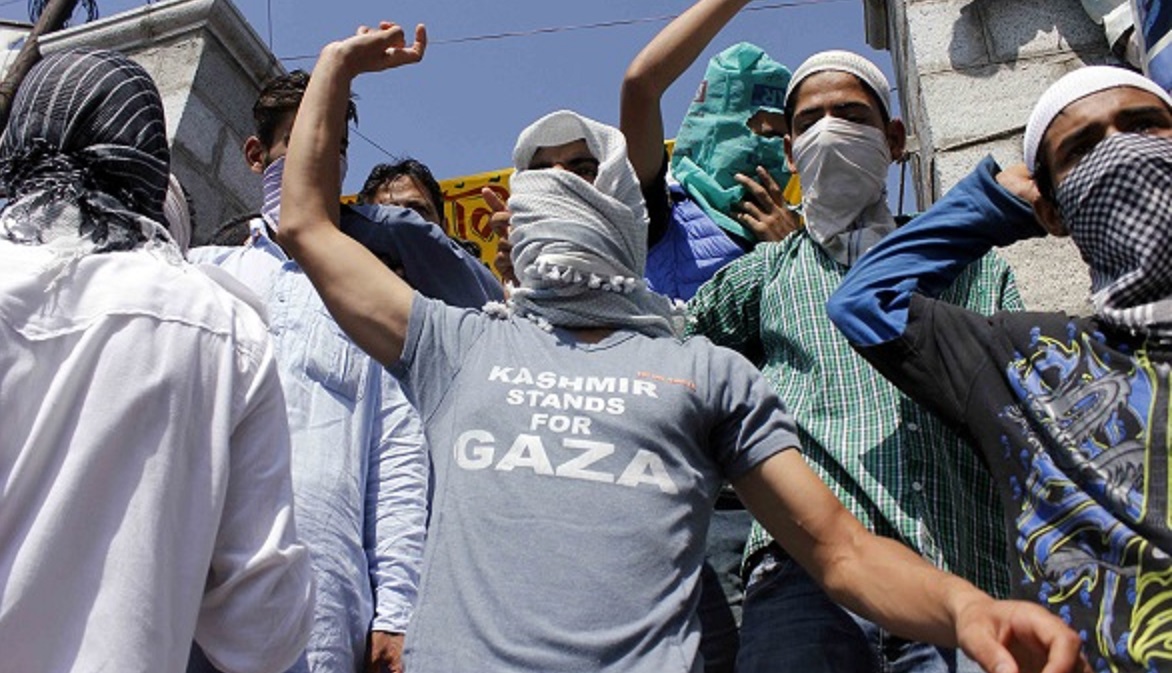 The separatist conglomerate in Kashmir  is looking at the ongoing face-off between the state of Israel and the terrorist organisation Hamas in Palestine as much needed oxygen for their, by now, irrelevant and redundant agenda.

Separatist leaders always strive to associate their so-called  “struggle” with well-known freedom movements across the world. They have often invoked Palestine, Ireland and other such movements to justify their acts in Kashmir as ones associated with the aspiration of the people to build a separate state for themselves. They have also gone to the extent of comparing their situation with that of the freedom struggle of India. Build-up of such comparisons, however weak and ineffective they may be, have for long remained their chosen line to establish their otherwise shaky credentials.

The biggest inspiration for this line of thought has come from Palestine. They have attempted to create an association with the concept of ‘intifada.’  Intifada is an Arabic term that, in the English language, can be loosely translated as an “uprising.”  It was liberally used in Kashmir in the aftermath of the Sri Amarnath Shrine Board (SASB) protests in 2010 by Syed Geelani  and applied on ground by his trusted aide Masarat Alam.

A certain romanticism was created by equating the Kashmir situation with the Palestinians standing up to the might of the Israeli Army with stone pelting. Thousands of leaflets were distributed in the Valley and messages sent through social media to build upon this narrative. It was said that the Indian Government had a plan to change the demographic pattern in Kashmir similar to the Israeli intentions in Palestine.

The narrative was successful in motivating some segments of the Kashmiri youth who started identifying with the Islamic movements in Palestine and other places across the world. Suddenly, stone-pelting against security forces in Kashmir became a symbol of the freedom struggle as did acts like snatching weapons from security forces, use of women in protests and carrying out attacks on motorcycles etc. A huge boost in terrorist recruitment from among the locals was witnessed, giving birth to poster boys like Burhan Wani.

That this narrative still holds sway can be seen by the creation of the “The Resistance Front” (TRF) immediately after the August 2019, reorganisation of Jammu and Kashmir and abrogation of Article 370. The TRF is a terrorist organisation  that has amalgamated the cadre of the Lashkar-e-Toiba (LET) and Hizbul Mujahedeen. The security forces in Kashmir look upon its creation as an “old and very weakened wine in a new bottle.” What is of significance here is the use of the word “resistance” that has always preoccupied the separatist psyche due to its association with the Palestine movement, Now it has finally found a place in the terminology of the Valley’s cult of separatism.

Under these circumstances, the heightened tensions in the Gaza strip are definitely an opportunity that the separatists wish to exploit to the hilt in furthering their evil agenda. The people of Kashmir are being motivated to raise their voices in support of the people of the Palestinians in the Gaza strip. Social media and religious leaders speaking from Mosques on loud speakers and in Ramadan congregations are being used for this purpose. The idea is to build up the matter to a crescendo where people come out on the streets and the old times of stone pelting and social disruption are resurrected.

Show of solidarity for Palestine in Kashmir

The Jammu Kashmir Police is very clear that while the people have the right to express their opinions, they cannot hold protests and disturb peace and order established with great effort.  The Police is determined to ensure that a few people who have a vested interest in causing disruption are not allowed to trigger public anger leading to violence, lawlessness and disorder. This determination is driven by the knowledge that such a situation can lead to big gatherings and cause a spike in the COVID cases at a time when great effort is being put in by one and all to contain the spread of the infection.

“We are a professional force and are sensitive to public anguish. But J&K police has a legal responsibility to ensure law and order as well. It will not allow cynical encashment of the public anger to trigger violence, lawlessness and disorder on the streets of Kashmir,” said IG Kashmir, Vijay Kumar.

It is for this reason that a very close watch on the situation is being kept ; posting of sensitive material related to the ongoing Israel-Palestine conflict is being monitored and a warning of strict action against those who use social media to ignite passions has been issued. “All irresponsible social media comments that result in actual violence and breaking of law including COVID protocol will attract legal action,” said Vijay Kumar in a tweet.

The seriousness with which the police is pursuing its determination to keep the streets free of protests can be gauged by the fact that 21 people, including youth who were breaking COVID restrictions and attempting to demonstrate in the streets in support of the Palestine struggle have been taken into preventive custody. This includes a rabid cleric and religious preacher, Sarjan Barkati, who has been attempting to leverage the Palestine issue to arouse passions among the youth. Barkati is a known radical who remained in jail  under the Public Security Act for four years before being released in October, 2020.

The separatists and other elements in Kashmir that work at the behest of inimical foreign powers want the world to believe the ludicrous notion that there is a freedom struggle in Kashmir. The reality is that the people of Kashmir are enjoying the fruits of freedom and democracy at par with the rest of India, a nation that provides the highest levels of liberty through constitutional provisions. There is a need for the Government as well as the people to stay vigilant about evil intentions of some who do not wish well for the region and to thwart their malevolent designs.