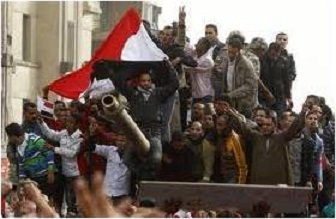 Hosni Mubarak, the authoritarian dictator of Egypt has fled from the capital city of Cairo after handing over power to Vice President Omar Sulieman and the Supreme Council of the Egyptian Armed Forces. His three decade long autocratic rule has come to an abrupt end due to overwhelming public resentment that poured out into the streets of Cairo especially the, by now historic, Tahrir Square. It took only 18 days for the people of Egypt to overthrow a hated regime through the medium of a non violent protest, one wonders why this could not have been done a decade or two earlier.

Hosni Mubarak’s time had come. Currently ranked 20th on list of the world’s worst dictators, he has survived six assassination attempts. His family assets collected through rampant corruption and exploitation are estimated to be upwards of $ 70 Billion. On top of it all, now plagued with old age and a debilitating cancer, he was trying to appoint his son Gamal Mubarak as the President of Egypt, to further a dynastic rule.

The electoral system in Egypt, (where Mubarak’s National Democratic Party is wholly dominant), does not meet internationally recognised standards of electoral democracies. According to the Freedom House, the political system is designed to ensure solid majorities for the ruling party at all levels of government. Freedom House also ranks Egypt’s political rights score as six and civil liberties score as five, with one being the most free and seven being the least free.

Anger had long been brewing in Egypt – strikes, unemployment and sectarian tension were on the rise, small networks of activists had been agitating for years. But it was only when another Arab country, Tunisia, rose up against its tyrant that the Egyptian activists attracted mass support. Earlier, a month long revolution in Tunisia had led to the change of a 23 year old military regime. The trigger of the Tunisian revolution was the death of Mohamed Bouazizi, a 26-year-old salesman who committed suicide by immolation, in Egypt a similar catalyst came from a 26 year old Egyptian woman, Azmaa Mahfouz, who made public, through the internet, her intention to march to Tahrir Square and exhorted her countrymen not to be afraid.

The ousting of Ben Ali in Tunisia, and Hosni Mubarak in Egypt, may now trigger a far broader upheaval in the other authoritarian Islamic regimes of the Afro-Asian region. Since Muhammad Bouazizi’s immolation in Tunisia on December 17, attempts towards self-immolation and unprecedented demonstrations have been held in Algeria, Mauritania, Saudi Arabia and Yemen. Mindful of this new challenge the Arab world’s authoritarian regimes are providing sops and attempting to control media. The Syrian regime has already suspended Internet service. The political environment is equally fragile in countries like Iraq, Iran, Afghanistan and, of course, Pakistan. In our neighbouring country a sham democracy, completely overwhelmed not only by the Army but also an equally potent Jihadi fundamentalist power, is in place.

Whether this courageous movement of the Egyptian people will give them the democracy and the freedom that they aspire for is yet to be seen. There is very less cause for jubilation at this stage because Armies of such countries are known to cling to power once they are placed in a position of authority. In Egypt an individual leader has been ousted but the regime remains unchanged. It may well be a case of “out of the frying pan into the fire” for these deprived people.

Within this turmoil, India stands out as an oasis of tranquility where all citizens enjoy absolute freedom and the fruits of a flourishing democracy. The country has in place all modern political norms that the people across two continents are struggling for. Under such circumstance it is very distressing to note that some vested interests, supported by inimical forces, are misguiding the Kashmiri people into following the discredited path of these failed States. This is happening despite the fact that freedom and democracy, as guaranteed by the enlightened constitution of the Indian Union, prevails in Kashmir. Whereas dissent in the Islamic world invites barbaric retribution the Kashmiri people have complete freedom to do what they wish to do. The government in Kashmir is elected through free and fair elections whereby the vibrancy of the democratic norms is maintained.

A comparison of the military establishment maintained by the Arab and other Islamic nations with that maintained by India sheds light on some very interesting facts. The Armies of the Arab-Islamic Nations are being used not for the primary task of defending the Nation against external aggression but to ensure the perpetual subjugation of the people to dictatorial regimes. The Indian Army, on the other hand, is wholly committed to the defence and territorial integrity of the Nation as is evident from the five successful wars that it has fought since independence. In the discharge of its duties, it provides the finest example of secularism, nationalism and respect for democratic norms. The highest military commanders in Jammu and Kashmir function seamlessly under the authority of not only the centre but also the State. India is the only country where the Chief Minister of State or a Province, as Chairman of a Unified Command and with senior military commanders designated as his advisors, has been given the authority to control all internal security operations

The events of the Afro Asian Islamic region should serve as an eye opener for the people of India about the dangers that surround them. Inimical forces are constantly trying to suck our country also into the abyss of subjugation and denial. The biggest threat is emanating from our immediate neighbour, Pakistan, where the centre of gravity of this faulted polity lies. Democracy allows dissent but the same should not be used to provoke people into committing political suicide. One must learn to count his blessings and not loose what others are trying to gain.