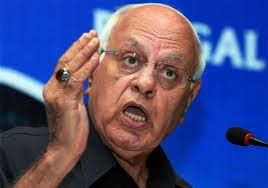 The Prime Minister of the puppet regime in Pakistan Occupied Kashmir (POK), Chaudhary Abdul Majid, keeps his chair warm by consistently generating false and frivolous propaganda against Jammu and Kashmir. He does so to keep his masters in the Pakistan government and his party (PPP) happy. Another reason is to mislead the poor, deprived people of POK by creating an impression that the condition of Kashmiri’s across the line of control is very bad.

Recently, he has been vociferous in “condemning” the “atrocities” being committed by India in Jammu and Kashmir during the election period. He stated that Kashmiri’s have rejected elections as they cannot be a substitute for right to self-determination. He further predicted that Indian leaders will not be able to stop the “movement for self determination” in Kashmir for long.

Even as Majid toddled along with his laughable insinuations, on the other side of the line of control in the Jammu-Poonch parliamentary constituency people came out in large numbers to vote. The region recorded 68% polling, the highest ever in Lok Sabha elections in the region. There was a jump of about 19% from the 2009 polls.

Long queues were seen at polling booths along the international border in Jammu and Akhnoor districts, which were worst affected by heavy cross border firing from the area which is administered by the puppet government headed by Majid. “The final tally is likely to go up as data is being complied in far off places of Rajouri and Poonch districts,” said chief electoral officer Umang Narula.

As would be expected from a dim wit like Majid, he has selected a wrong line for his propaganda. Even though the elections in Jammu and Kashmir have started on a good note and will undoubtedly finish off with a positive note, there are some weak spots that need urgent attention. Jammu and Kashmir has a population of a little over 12 million of which two third resides in remote rural areas. The literacy rate stands at a not too good 67%; over half a million, in fact, closer to a million of the youth who constitute 30 percent plus population of the state are unemployed. It is this segment that needs to be given maximum attention which, sadly, does not seem to be coming by.

Once the euphoria of election dies down the predominant question will be – are those elected equipped with the potential to meet the aspirations of the people who are risking their lives to come out and vote for them, especially the youth of the region?

This question becomes even more relevant with regard to the Assembly elections scheduled a few months hence for which the parliamentary polls are a precursor. All parties have gone in for vigorous campaigning. None, however, has fielded a candidate who can bring about a breath of fresh air in the political climate of the state. The three main contestants in the Jammu-Poonch parliamentary constituency are old hands who, despite being in politics for decades now, have not been able to bring about the drastic change that the region is looking for. It would not be wrong to expect them to adopt traditional postures and shy away from trying out something new and innovative to meet the challenges that the trouble torn region poses. The same is the case with the other constituencies also.

It is time to honestly carry out a head count of those amongst the political leaders in Jammu and Kashmir who come across as role models for the youth. Can Omar Abdullah and Mehbooba Mufti be looked upon as good role models? Is the life and times of Farooq Abdullah, Mufti Mohammad Sayeed or even Mirwaiz Umar Farooq and Syed Ali Shah Geelani for that matter something to be looked upon by the youth with a sense of pride? The answer, unfortunately, is a big NO!!

Under such agonising circumstances the role models for the youth of the Kashmir valley are the muscular goons on the pay role of the disruptive elements for the purpose of creating disorder and mayhem by stone pelting and forced shut downs during Hartals and Bandhs. In the rural areas the role model space is being filled by propagators of religious radicalism whose virulent discourses create an aura so badly missing in the empty lives of the young people.

Even as terrorism and violence is on the wane aggression continues to be a guiding factor in the lives of a large segment of the young population especially so in the Kashmir valley. There is every reason to look upon this malaise as a very disturbing trend.

What the youth of Kashmir is missing out on is dynamic, honest and committed leadership. The inability of political parties to throw up such talent is leading to a sense of cynicism. Being bereft of any hope in the present dispensation the youth feels secure in dreaming of a future under very different circumstances. There are many young and restless in Jammu and Kashmir who are convinced that an “independent Kashmir” will change their lives drastically; such dreams are being exploited to the hilt by the outsiders like Chaudhary Abdul Majid and other in the valley itself who are paid stooges of forces hostile to the prosperity of Jammu and Kashmir.

This void in leadership is giving space to dysfunctional issues like independence, Islamic state, Jihad etc. The thought process of the youth is not being channelled into the right and desirable direction either by provision of facilities, jobs etc or by providing an ideological direction. The youth are insecure and staring at a bleak future because there is no nobody to give them the confidence. In order to bring a change in the trouble torn region of Jammu and Kashmir the leadership has to not only deliver but also inspire. This is possible only if change is affected in the attitude of the existing leadership or in the leadership itself is changed.