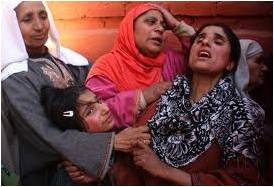 The recent incidents of killing of two young girls in Sopore and gunshot injuries sustained by two innocent girls in Pattan have once again exposed the hazards of the gun in the hands of people who have scant value for human life. Kashmir is, unfortunately, a battleground for Pakistan to fructify its unholy ambition of dissecting India. As a result, innocent Kashmiri’s are suffering. The promise of ‘Azadi’ acted as a sedative to lull the people into a dream of Utopia and they fell for it, disregarding the realities of the modern day world order. They welcomed the ‘mujahids’, hosted them and in this process, suffered terribly due to the terrorism that was unleashed upon them by their guests. Today, after two decades, the time has finally come when the people have woken up to face reality.

In the nineties, when militancy in the Kashmir valley was still in a state of infancy, rampant killing of innocent people by ‘unidentified persons’ was a frequent happening as there were a host of armed mercenaries on the rampage – the various factions of the terrorists and also the imposters – men who took advantage of the chaotic situation to settle personal scores. One would recall the fateful day of May, 21, 1990 when news of the assassination of the revered Mirwaiz, Maulvi Mohammad Farooq, shook the valley. The security agencies and the terrorists blamed each other for the heinous crime. Terrorists called it a State sponsored conspiracy to derail the ‘armed struggle’ while the security forces termed it as an attempt by militants to ‘crush the voice of reason’ in the Kashmir valley. Now almost two decades hence, the prominent Hurriyat leader Abdul Gani Bhat has opened a can of worms by admitting that the killing of many Kashmiri leaders, including the Mirwaiz and Abdul Gani Lone, was the handiwork of the terrorists. This admittance may have sent shock waves outside the Kashmir valley, but the Kashmiri people have not reacted because what has been said has been common knowledge all this while.

In the recent case of the gruesome murder of the two sisters in Sopore, the needle of suspicion is on the Lashkar-e-Toiba. The terrorist organisation initially denied any involvement, however, according to some newspaper reports, posters came up in Sopore on February, 07 claiming that the sisters had been killed by the Lashkar for ‘improper behaviour’ and for being ‘informers of the security forces”. The source of these posters is suspect and since a communiqué has not come from an official channel of the Lashkar, it can be well deduced that the organisation officially continues to be in a denial mode. Now, the question is – if the Lashkar or some other terrorist group has not committed this gruesome crime than who has?

If one dispassionately analyses the heinous act, then the role of the security forces in this incident does not seem to fit in- firstly, at a time when New Delhi is desperately trying to mend fences with the ‘Awam’ of Kashmir, it certainly will neither authorise nor condone an attack on civilians and that too on teenaged girls! Secondly, the role of rogue elements within the security forces or government intelligence agencies too is extremely unlikely given the brazen manner in which these killings have been carried out (entering a house in a crowded locality, abduction and subsequent killing). Thus, it would not require a Sherlock Holmes to deduce that the perpetuators of this crime committed with blatant impunity were obviously those who had no fear of being held accountable for the same. Under these circumstances, the needle of suspicion obviously points towards some terrorist group.

Though the residents of Sopore are unwilling to express their apprehensions in public for fear of inviting the wrath of the terrorists, they know why this has happened and who the culprits are. In fact, the silent protest by girls in Srinagar goes to show how quickly news travels in today’s world which is so closely connected through internet and mobile phones. The protesting girls know that the deceased girls had no association with the security forces. They also know that these young girls were simple souls and devout Muslims who had made a cardinal mistake of spurning the advances of a well known terrorist of foreign descent; their only crime was that they wished to preserve their honour and for this they paid with their lives.

This is not the first incident of its type. In the past, a number of young Kashmiri girls have been put to death by terrorists on charges of being informers of the security forces. Those not acquainted with Kashmiri culture and way of life may well believe that Kashmiri girls are so outgoing and bold that they would agree to spy for the security forces. However, those who live in Kashmir know very well that, let alone spying, the women folk would not so much as even dare to enter into casual conversation with the men in uniform. The fact of the matter is that terrorists have formed a habit of taking things for granted and treating Kashmiri women folk like ‘spoils of war’ and if they refuse to enter into a physical relationship with the militants, they are conveniently branded as ‘informers’ and ‘executed’.

Such acts of immorality cannot be condoned, more so, since it is prohibited in Islam. ‘Jehad’ is not just picking up a gun and killing people at will- it is following a path of righteousness in which ensuring the honour and dignity of women is paramount. One wonders if the terrorists, or militants, as some would like to refer to them as, operating in Kashmir are aware of the difference between an unholy jihad and rampant criminality. It is this cancer in the Kashmiri society that the State government should be fighting with all the means at its disposal instead of raking up issues of troop reduction etc whose time as, as yet, not come