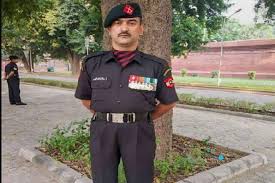 Lance Naik Nazir Ahmed Wani, an ethnic Kashmiri serving the Indian Army, attained martyrdom on November, 25, 2018 while being engaged in a counter terrorist operation at the Kapran Batagund area of Shopian in South Kashmir.  The brave heart belonged to Village Cheki Ashmuji of Tehsil Kulgam in Kashmir. A highly decorated soldier, he had been awarded Sena Medal for gallantry twice – in August, 2007 and in August, 2018.

On the fateful day of his martyrdom, as part of a search operation, he encountered two hard core terrorists belonging to the Lashkar-e-Toiba (LeT). He engaged them in a fire fight and eliminated them before attaining martyrdom in service of his nation.

Lance Naik Nazir Ahmed Wani SM* was an erstwhile Ikhwan. Ikhwan was a group of surrendered militants who had realised the evil intent behind the violence being perpetrated by malevolent forces working for foreign powers. These Ikhwani’s organised themselves to assist the government in ridding their land from the evil of foreign sponsored terrorism.

During his early days as an Ikhwan, Nazir Ahmed provided invaluable assistance to the Indian Army in the fight against terrorism. His indomitable courage and bravery resulted in great operational success. In consideration of his great contribution, he was recruited in the Indian Army in 2004 and he continued his relentless pursuit against terrorism, specifically in Kulgam and Shopian Districts.

On January, 17, 2007 as part of Operation Augam, he corroborated the intelligence with regard to presence of four terrorists from the Hizbul Mujahedeen (HM) group and then took part in the operation that led to their elimination. He was awarded his first Sena Medal for this act of bravery.

On November, 14, 2017, as part of Operation Watengoo in the Kund area of Kulgam, he not only provided accurate input about the presence of HM and LeT terrorists in a house but also displayed exemplary courage in eliminating a HM terrorist and apprehending one LeT and HM terrorist each.  For this act of bravery he was awarded his second Sena Medal on August, 15, 2018.

Lance Naik Nazir Ahmed Wani SM* was a brave son of India. He cared deeply for his people and worked relentlessly and selflessly to rid them of the curse of terrorism. Such was his conviction about the righteousness of the national cause in Jammu and Kashmir that he voluntarily faced danger frequently, with no concern to his personal safety.

The counter-terrorist operation in which the brave soldier attained martyrdom culminated with the death of six terrorists of which four were from the HM and two from the LeT. It was a huge success for the e security forces and a significant step towards putting an end to the menace of terrorism for all times to come.

The security forces in Kashmir have attained significant success against the terrorists in the last two years. The number of terrorists killed this year is in excess of 200 with some top so-called commanders forming a major part of the list. The success has not come without a price! More than forty brave Army Soldiers have attained martyrdom in this year itself. The year 2017 witnessed more than 80 brave hearts of the Army making the supreme sacrifice.

It is said that there are no perfect solutions in an imperfect world. Terrorism has emerged as an irrefutable global reality. In Kashmir it has a different dimension altogether due to the involvement of an inimical neighbouring nation. Unmitigated violence against innocent civilians has been unleashed and safety has emerged as a sacred responsibility of the Indian state.

It is something that simply cannot be brushed under the carpet.  It needs to be faced head on and no better example of this is available than the efforts of the brave soldiers of the Indian army, the Para-military forces and the Police services. The death of a soldier in counter terrorist operations, whether he belongs to the army the Para-military force or the police is the by product of an evil human rights violation whose root cause is terrorism. This, regrettably, has to continue because a vicious and ruthless enemy of the nation has to be neutralised. The soldier has taken it upon himself to perform this noble function regardless of his own rights and safety.

It is against this backdrop that the nation needs to acknowledge the sacrifice made by a few for the benefit of the whole. And it is in this regard that the sacrifice of a courageous son of India like Lance Naik Nazir Ahmed needs to be acknowledged.

It is a well known fact that some forces do not want the presence of Indian army in Kashmir. From time to time, there have been vicious campaigns against the army over its alleged excesses on “innocents.” While reflecting on the death of the brave Kashmiri soldier, Nazir Wani, one wonders as to why the human rights organisations, that are otherwise so active in the valley, have not raised any voice of concern at his wanton killing.

The nation spearheaded by the Indian Army paid tribute to the fallen soldier. In a solemn ceremony at Srinagar, Lt. Gen. AK Bhatt, Commander, Chinar Corps, and all ranks, paid homage to the martyr. In a show of solidarity, representatives from other security agencies also joined in to pay their last respects. The mortal remains of the martyr were then taken for last rites to his native place, where he was laid to rest with full military honours.

Lance Naik Nazir Ahmed is survived by his wife Mrs. Mahajbeen and two sons, Athar Nazir aged 20 years and Shahid Nazir aged 18 years. The nation and the Army stand in solidarity with the bereaved family of the martyr and remain committed to their dignity and well being. The sacrifice of Lance Naik Nazir Wani will not go in vain. His future generations and those of his community, that he was so passionate about, will enjoy the fruits of prosperity in a safe and secure environment. This is a solemn promise to him by his comrades in arms.

(Jaibans Singh is an Army veteran, strategic analyst and columnist)